Kansas survives scare against Penn to advance in tourney 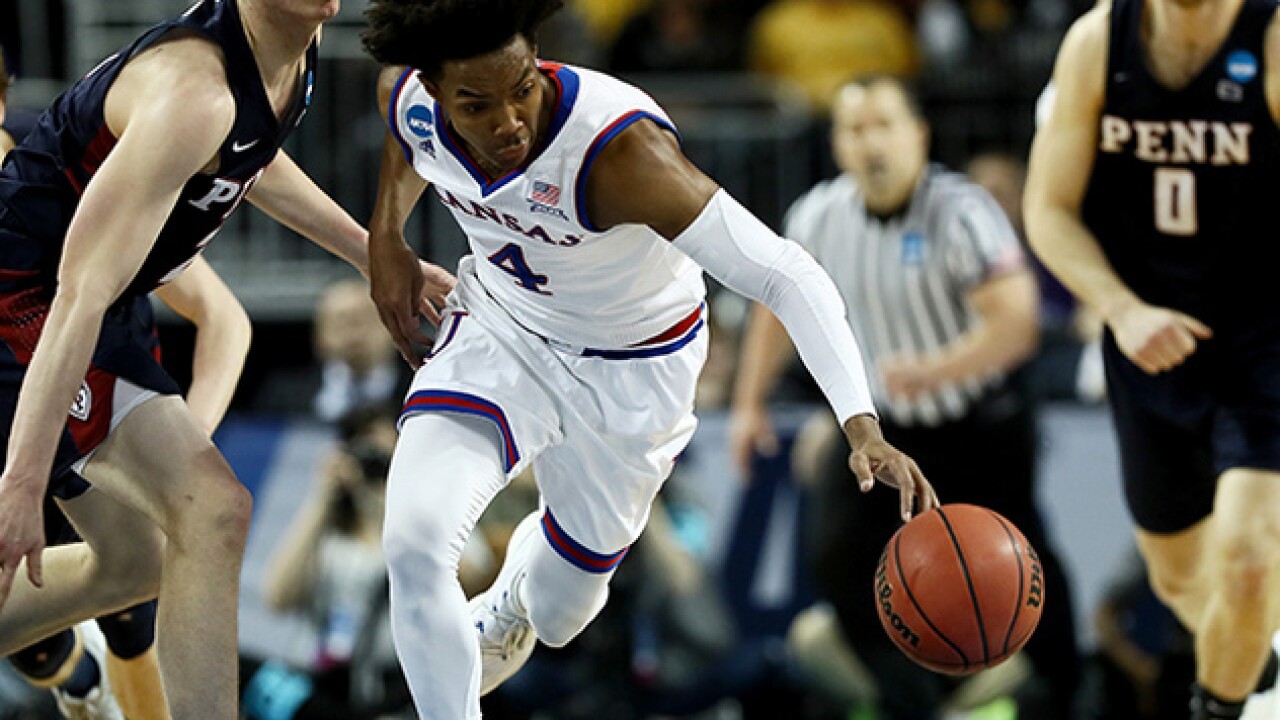 Copyright 2018 Scripps Media, Inc. All rights reserved. This material may not be published, broadcast, rewritten, or redistributed.
Jeff Gross
<p>WICHITA, KS - MARCH 15: Devonte' Graham #4 of the Kansas Jayhawks dribbles the ball past Ryan Betley #21 of the Pennsylvania Quakers in the first half during the first round of the 2018 NCAA Tournament at INTRUST Arena on March 15, 2018 in Wichita, Kansas. (Photo by Jamie Squire/Getty Images)</p>

WICHITA, Kan. — Devonte Graham kept driving to the rim, using his deft crossover and blinding first step to get past Penn's defenders, only to watch every shot he put up bounce out.

He turned to teammate Malik Newman and said, "Man, I'm just not finishing."

The Big 12 player of the year finally started to get his shots to go, igniting sluggish Kansas midway through the first half and finishing with 29 points, lifting the top-seeded Jayhawks to a tough, grind-it-out 76-60 victory over the Quakers in the opening round of the NCAA Tournament.

Lagerald Vick added 14 points for the Jayhawks (28-7), who trailed the Ivy League champs by 10 in the early stages Thursday before going on a 19-2 run late in the half to take control.

Graham, perhaps atoning for a dismal performance in last year's tournament loss to Oregon, also had six rebounds and six assists as the Jayhawks cruised into a second-round matchup with eighth-seeded Seton Hall or No. 9 seed North Carolina State in the loaded Midwest Region.

Graham stepped up to the task.

"He was just keeping everybody's heads right," Vick said. "He told us we weren't going to lose."

"Give Kansas a ton of credit. Thought they played a terrific game," Penn coach Steve Donahue said. "It was a great basketball game for about 35 minutes. Then they finished us off."

The Jayhawks played most of the way without 7-footer Udoka Azubuike, who hurt a ligament in his left knee in practice last week. The sophomore center played three minutes, all in the first half, and struggled to move around while wearing a bulky brace on his leg.

Trying to succeed where 132 other No. 16 seeds had failed, the Quakers raced to a 21-11 lead with about 7 minutes left in the first half. They leaned on their stingy perimeter defense to limit the hot-shooting Jayhawks' 3-point barrage, and their pick-and-roll offense was humming.

It took the Big 12 player of the year to restore some order.

Graham picked the pocket of Caleb Wood on defense, trailed a fast-break play and was there to lay in Mykhailiuk's missed layup, trigging what would become a 19-2 run over the next six minutes.

Graham added back-to-back baskets, using his speed and crossover to get to the rim, then knocked down a pair of 3s later in the run. He capped his 19-point first-half barrage by drawing a foul as the Quakers were attempted to give a foul away, then hitting all three foul shots.

That gave the Big 12 champions a 33-26 lead heading into the locker room.

Penn hung around until midway through the second half, when the bigger, stronger Jayhawks began to assert control. Their veteran backcourt did most of the work, slowly drawing away.

"Credit to Graham, he realized what was going on in the game. He has a great feel for the game," Penn's Darnell Foreman said. "Knowing he's a senior, he had to step up and force the tone and create and he did a great job of that."