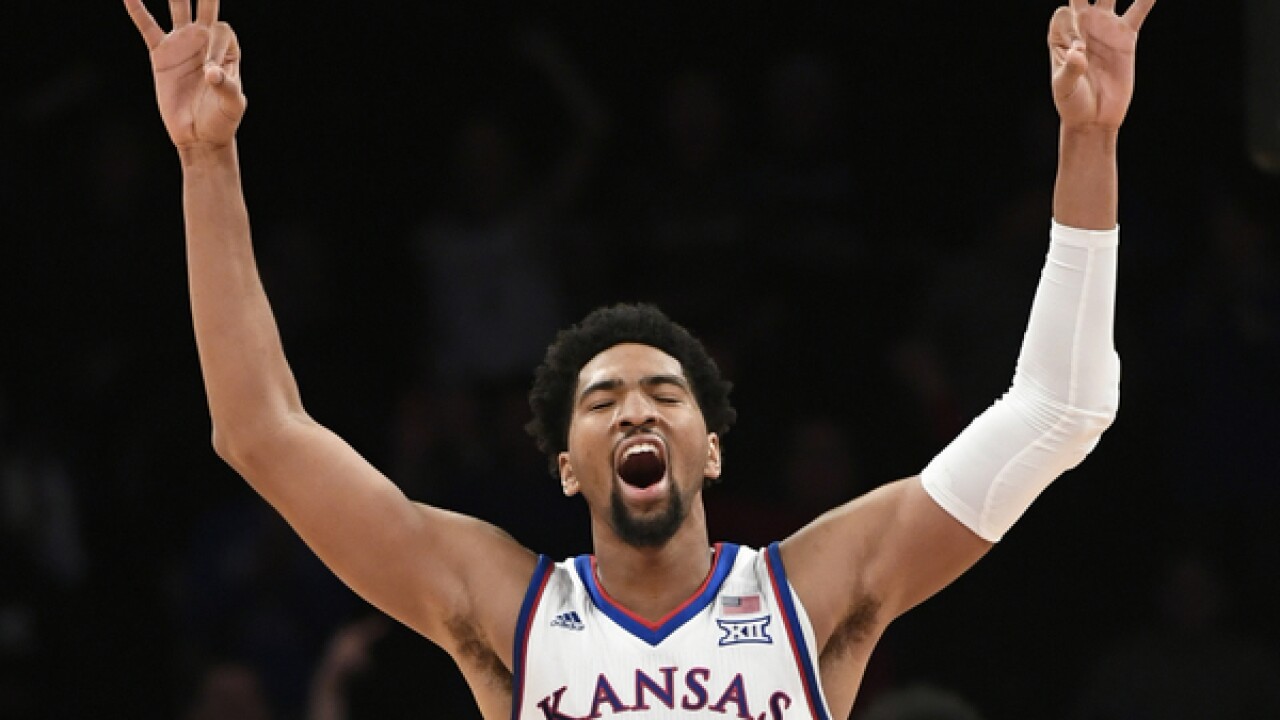 Copyright 2018 Scripps Media, Inc. All rights reserved. This material may not be published, broadcast, rewritten, or redistributed.
Sarah Stier
<p>NEW YORK, NEW YORK - NOVEMBER 23: Dedric Lawson #1 of the Kansas Jayhawks reacts during the second half of the game against Tennessee Volunteers at the NIT Season Tip-Off Tournament at Barclays Center on November 23, 2018 in the Brooklyn borough of New York City. (Photo by Sarah Stier/Getty Images)</p>

(AP) -- Dedric Lawson had 20 points and 10 rebounds, and No. 2 Kansas got past New Mexico State 63-60 in the Jayhawk Shootout on Saturday night.

The Jayhawks' offense stalled after a hot start in their first game without injured center Udoka Azubuike, going scoreless for over five minutes in the first half. But they put it together late, as Lawson's layup with just under four minutes left gave them their first lead since the first half.

Kansas (8-0) wouldn't surrender that lead, allowing some ties but ultimately keeping New Mexico State at arm's length. The Aggies (7-2) had a chance to tie it on a 3-pointer with 6 seconds to go, but JoJo

Zamora's attempt bounced off the rim and they didn't get another look. Zamora scored 15 points on 5-of-9 shooting. Ivan Aurrecoechea added 14 points and six assists, and Johnny McCants had 12 points and six rebounds.

Marcus Garrett was the only other Jayhawk in double figures, with 10 points.

The turnover battle was 16-13 in Kansas' favor, and the Jayhawks did more with those slip-ups, outscoring the Aggies 29-16 off turnovers.

Kansas shot 33 percent from 3-point range to 27 percent for New Mexico State. The Jayhawks improved to 4-0 all-time against the Aggies.

New Mexico State hung with the No. 2 team in the country and perhaps lived up to its billing as the preseason pick to win the Western Athletic Conference.

With the 7-foot Azubuike on the bench with a sprained ankle, Kansas once again struggled before pulling out a win.

Kansas heads back to Allen Fieldhouse for its clash with No. 21 Villanova next Saturday.