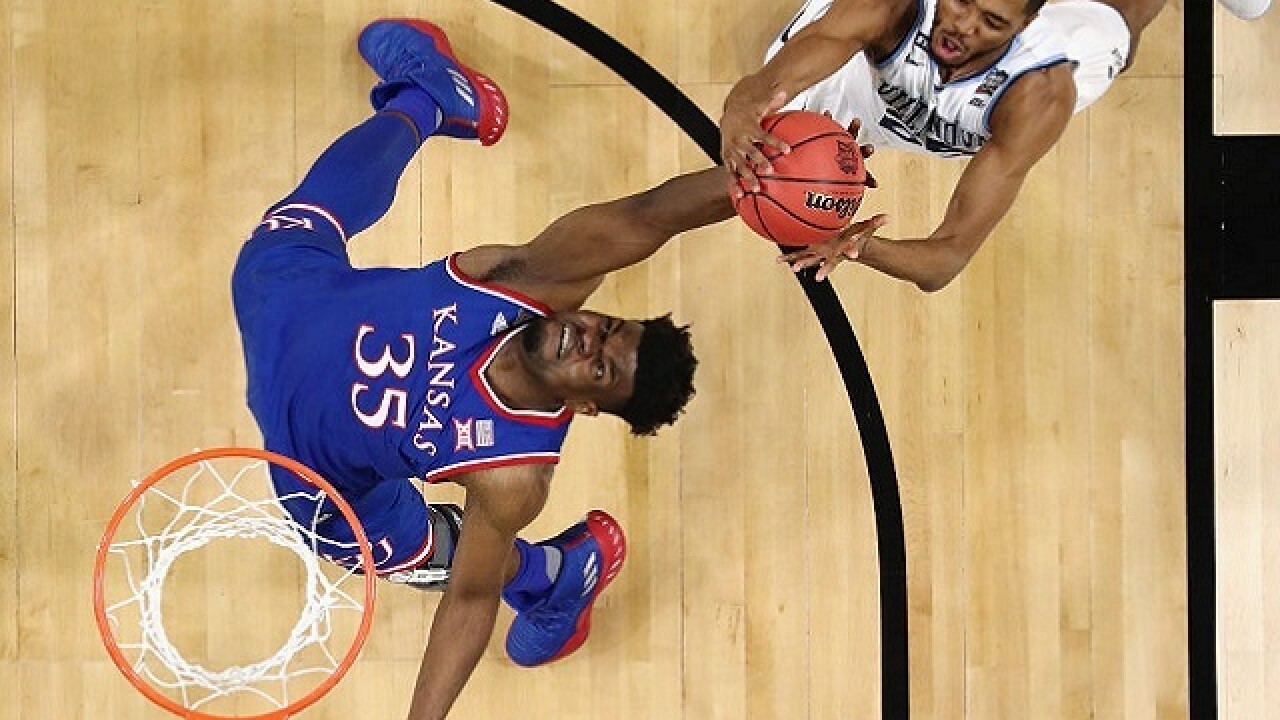 Copyright 2018 Scripps Media, Inc. All rights reserved. This material may not be published, broadcast, rewritten, or redistributed.
Ronald Martinez
<p>SAN ANTONIO, TX - MARCH 31: Udoka Azubuike #35 of the Kansas Jayhawks competes for the ball with Mikal Bridges #25 of the Villanova Wildcats in the first half during the 2018 NCAA Men's Final Four Semifinal at the Alamodome on March 31, 2018 in San Antonio, Texas. (Photo by Ronald Martinez/Getty Images)</p>

The coach knew his Jayhawks had to close out on Villanova's deep well of 3-point shooters and contest all those deep shots if they were going to beat the Wildcats in Saturday's national semifinals. Instead, Self found himself flailing his arms in disbelief as Villanova's very first basket was a corner 3 on a clean look — the start of a have-no-answers night as the Wildcats made 3s at a record pace to shoot the Jayhawks right into the offseason.

Kansas (31-8) came into the game playing a guard-heavy lineup that theoretically could give them a bit more ability to chase Villanova's shooters on the perimeter. And the Jayhawks had allowed opponents to shoot 32.7 percent from behind the arc this year while allowing 10 or more 3s just 10 times all year.

But the Jayhawks were a step slow all night in San Antonio, the site of their last national championship a decade ago. They couldn't keep up as the Wildcats whipped the ball around the perimeter or on drive-and-kickouts for open looks, and they couldn't hit enough 3s of their own at the other end to stem the Wildcats' rampaging display.

Self, meanwhile, was irked from the moment Eric Paschall drained that open corner 3 less than 90 seconds into the game. Minutes later, the ball swung to Omari Spellman near the top and Self immediately pointed for 7-footer Udoka Azubuike to come out. Azubuike made it only to about the elbow before Spellman was knocking it down and leading Self to burn an immediate timeout.

At another point, Villanova pushed the ball ahead and found Paschall alone in the corner right in front of the Kansas bench for another 3. Marcus Garrett couldn't recover from the wing and Paschall buried that one, too, sending Self leaning back in his chair and raising both hands to his head.

Later in the half, Self was yelling to his team "Don't back off!" on the defensive end as though trying to re-emphasize a point from a scouting-report long since torn to shreds.

Nothing worked. And things got so bad that the Wildcats had tied the Final Four single-game record of 13 3-pointers by halftime, prompting the NCAA to post a highlight montage of each and every one on Twitter.