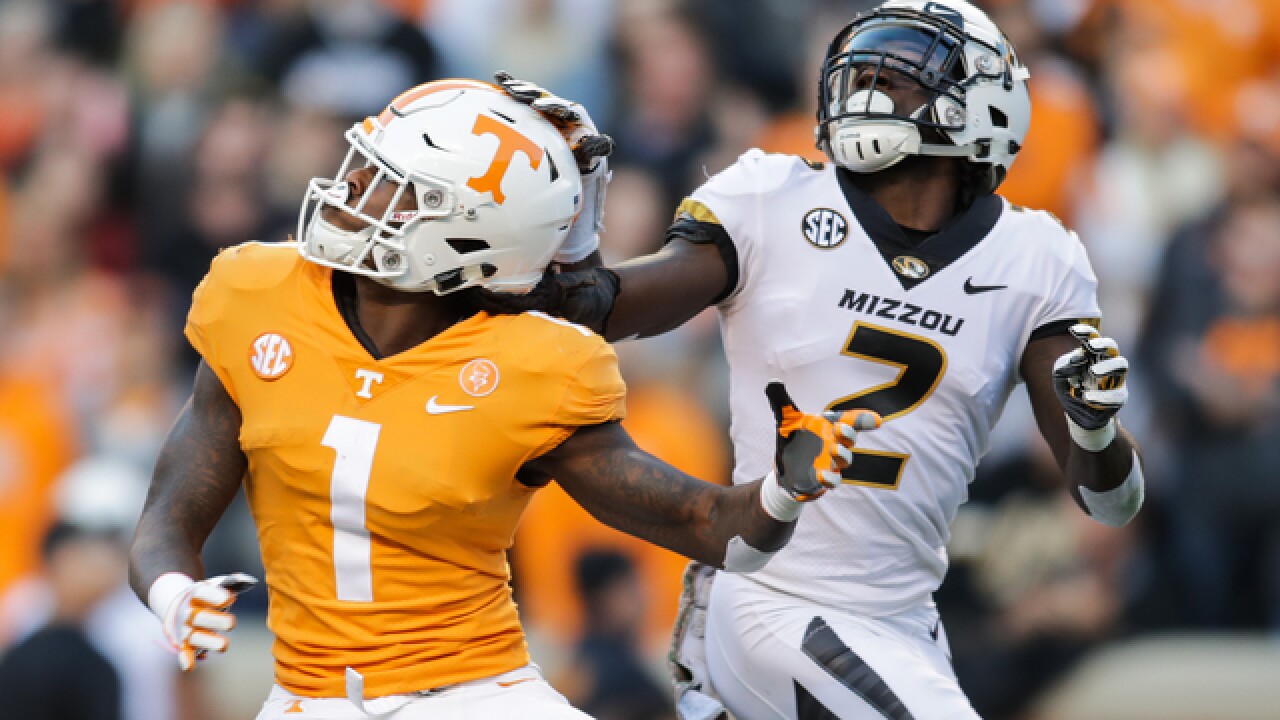 Copyright 2018 Scripps Media, Inc. All rights reserved. This material may not be published, broadcast, rewritten, or redistributed.
Donald Page
<p>KNOXVILLE, TN - NOVEMBER 17: Marquez Callaway #1 of the Tennessee Volunteers and DeMarkus Acy #2 of the Missouri Tigers compete for a pass during the first half of the game between the Missouri Tigers and the Tennessee Volunteers at Neyland Stadium on November 17, 2018 in Knoxville, Tennessee. (Photo by Donald Page/Getty Images)</p>

Drew Lock threw two touchdown passes and Larry Rountree rushed for 135 yards Saturday as Missouri trounced Tennessee 50-17 for its third straight victory. Lock went 21 of 30 for 257 yards and moved into second place on the Southeastern Conference's career passing yardage list. Lock has thrown for 11,599 yards in his career to overtake David Greene, who passed for 11,528 yards at Georgia from 2001-04.

The SEC record holder is Aaron Murray, who compiled 13,166 career passing yards for Georgia from 2010-13.

Ty Chandler had two touchdown runs for Tennessee (5-6, 2-5), which lost starting quarterback Jarrett Guarantano to an injury. Keller Chryst replaced Guarantano early in the second quarter and went 7 of 19 for 173 yards with two interceptions.

This marks the second consecutive year that Missouri has beaten Tennessee by a 50-17 score.

Missouri outgained Tennessee 117-(minus-17) in the first quarter but only had a 6-0 lead to show for it after two drives stalled in the red zone, forcing the Tigers to settle for Tucker McCann field goals from 35 and 23 yards away.

The momentum briefly changed after Chryst entered the game. Chryst's 41-yard completion to Jauan Jennings on a third-and-6 play set up a 5-yard touchdown run from Ty Chandler that put Tennessee ahead 7-6.

Missouri regained command by scoring touchdowns on its final three first-half possessions to grab a 26-10 lead at the intermission.

Tyler Badie scored Missouri's first touchdown on a 4-yard run. Tennessee had second-and-goal from the 2 on its next series but settled for Brent Cimaglia's 21-yard field goal. Missouri answered with Lock's 8-yard touchdown pass to Dominic Gicinto.

Tennessee reached Missouri's 28-yard line in the final minute of the half before DeMarkus Acy picked off a Chryst pass and delivered a 76-yard interception return. That turnover gave Missouri the ball at Tennessee's 11 and set up Lock's 3-yard touchdown pass to Johnathon Johnson with 15 seconds left until halftime.

After both teams reached the end zone on their opening possessions of the second half, another Tennessee turnover put the game out of reach. Tennessee's Carlin Fils-aime fumbled on his only carry of the night and

Joshuah Bledsoe picked it up and ran 39 yards for a Missouri touchdown that made it 40-17.

Missouri: Don't bet against the Tigers in November. Missouri improved its November record to 9-2 under third-year coach Barry Odom. The Tigers won easily Saturday even though an ankle injury limited Damarea Crockett to three carries for 10 yards after he rushed for over 100 yards each of the last two weeks. Missouri has won its last eight November games. Last year, the Tigers won their final six regular-season games before falling to Texas in the Texas Bowl.

Tennessee: The Vols still can become bowl eligible by winning at Vanderbilt next week, which would represent a giant step forward for a program that finished 4-8 and went winless in SEC competition last year. Tennessee would benefit if Guarantano returns for the Vanderbilt game after he had to miss the final three quarters of the Missouri matchup.