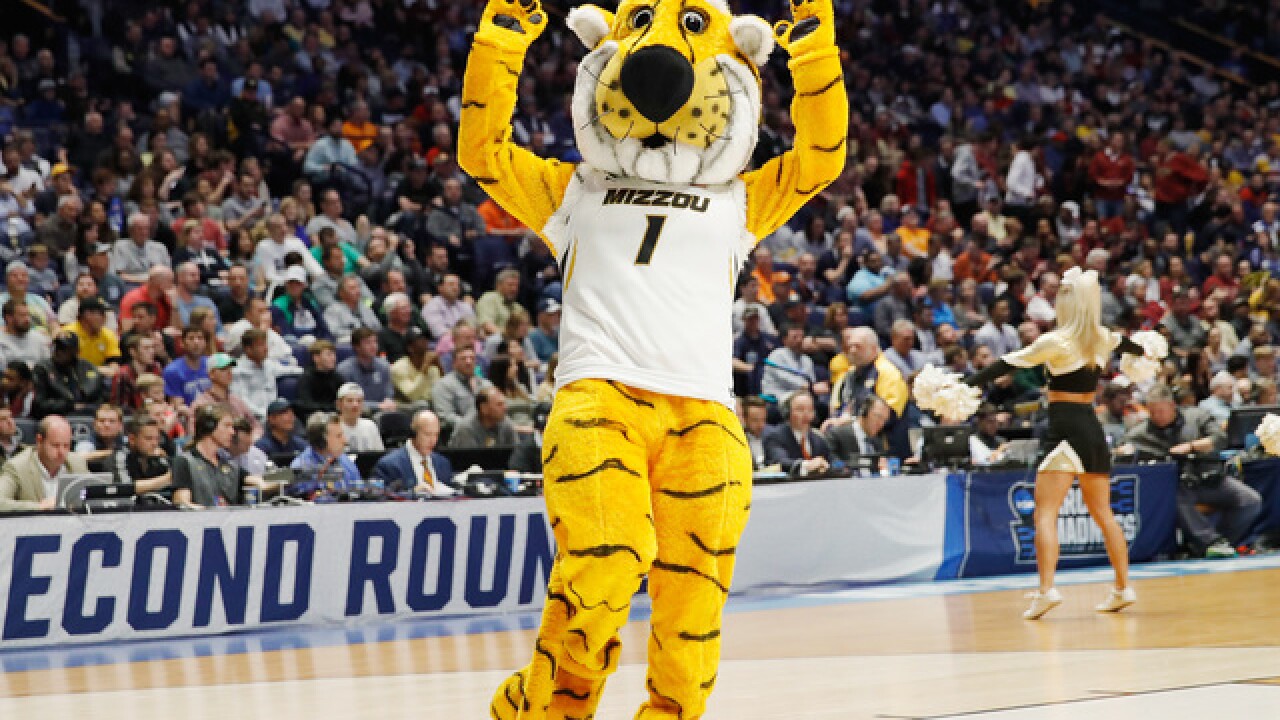 Copyright 2018 Scripps Media, Inc. All rights reserved. This material may not be published, broadcast, rewritten, or redistributed.
Frederick Breedon
<p>NASHVILLE, TN - MARCH 16: The Missouri Tigers mascot looks on against the Florida State Seminoles during the game in the first round of the 2018 NCAA Men's Basketball Tournament at Bridgestone Arena on March 16, 2018 in Nashville, Tennessee. (Photo by Frederick Breedon/Getty Images)</p>

Missouri looked to be in trouble after Oral Roberts' DeShang Weaver drilled a pair of 3s to cut the Tigers' lead to just three at the beginning of the second half.

Missouri hadn't been able to break Oral Roberts' zone defense and all of its big men were in major foul trouble.

But Missouri's offense came alive in the second half to defeat Oral Roberts 80-64 Friday night for its third win in a row.

The Tigers fed off the 3-point shot all game. Freshman Torrence Watson shot 4 for 4 from 3 and Mark Smith knocked in three from beyond the arc as well. He led the Tigers with 14 points. Missouri finished 12 for 26 from 3.

It wasn't all pretty for the Tigers, however. Missouri's bigs played with foul trouble all game. Forwards Jeremiah Tilmon, Mitchell Smith and Reed Nikko finished with four, three and four fouls, respectively.

As a result, the Golden Eagles had their way down low for most of the game. Emmanuel Nzekwesi took advantage of Missouri's foul situation and scored 17 points to lead Oral Roberts. Emir Ahmedic came off the bench for ORU to lead all players with 10 rebounds.

But nearly every time the Golden Eagles would cut a Tigers lead, Missouri would roar back with a big 3-pointer.

"What I was really disappointed in was our 3-point defense," Oral Roberts coach Paul Mills said. "Specifically with guys who could shoot. The two guys we knew could really shoot ended up going 7 for 10 from 3 and the rest of the team went 5 for 16."

The turning point of the game came around the 13-minute mark in the second half when Missouri senior Jordan Geist sprinted down the court for a fast break layup and stole the following inbounds pass. He converted an and-one after the swipe to put the Tigers up 10. The basket was in the midst of a 10-0 run.

The Tigers would extend their second-half lead up to 29 before putting Oral Roberts away.

Oral Roberts: The Golden Eagles now have nine losses. Credit to Oral Roberts for staying in the contest against Missouri, but its defense slowed down in the second half.

Missouri: The Tigers are carrying momentum from this three-game winning streak into a two-game stretch against more challenging opponents, Xavier and Illinois. They'll need to play how they did in the second half, rather than the first, to win both of those matchups.

TROUBLES WITH THE ZONE

Throughout the first half, Missouri had difficulty breaking Oral Roberts' zone defense. The Tigers had a handful of possessions where they tossed the ball around the perimeter without being able to penetrate into the lane.

"We've just got to move the ball better," Geist said. "We kind of just kept passing it back to each other, not doing much. The most we can do is try to get them out of it. The more shots you make, you've got to force them out of it."

SANTOS DEBUTS
Missouri guard K.J. Santos appeared in his first game for the Tigers after transferring from Illinois-Chicago in 2017 and dealing with a foot injury. Santos went scoreless in 11 minutes of play. He picked up a rebound and turned the ball over twice.

Oral Roberts has a break before playing Richmond on the road Dec. 15.

Missouri returns to Mizzou Arena on Dec. 18 for a matchup against Xavier.