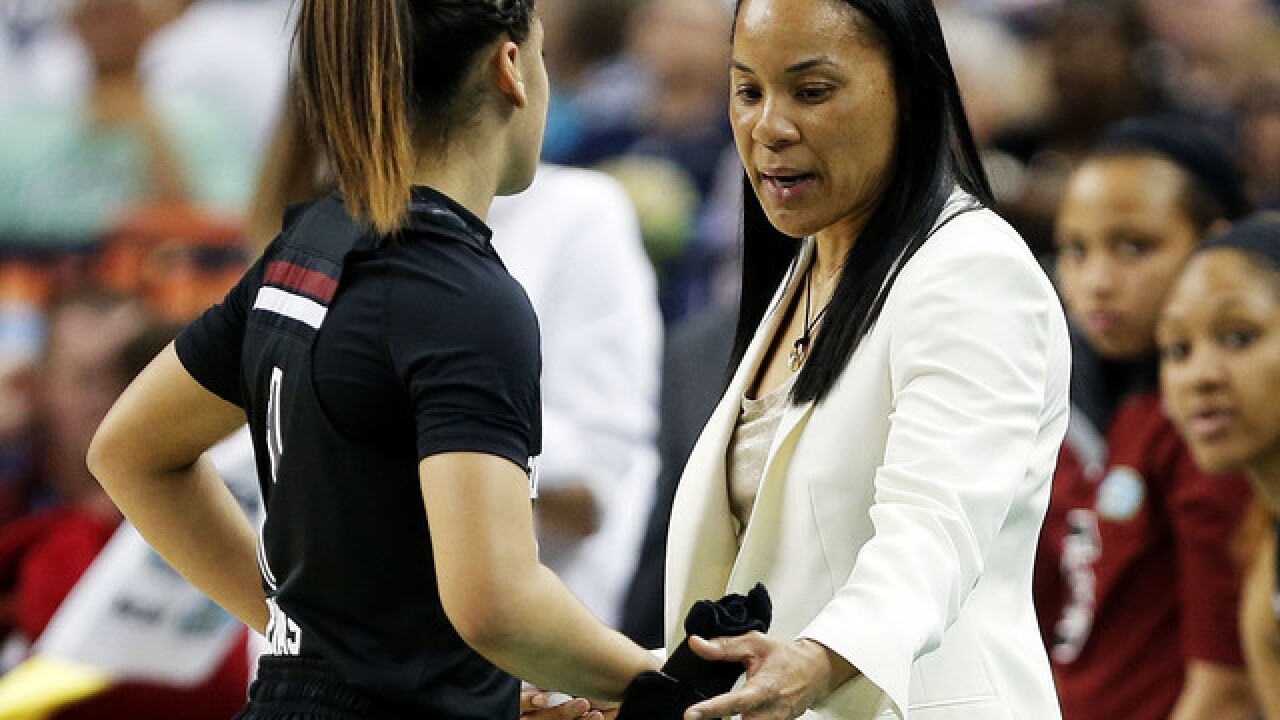 Copyright 2018 Scripps Media, Inc. All rights reserved. This material may not be published, broadcast, rewritten, or redistributed.
Mike Carlson
<p>TAMPA, FL - APRIL 05: Head coach Dawn Staley talks to Bianca Cuevas #1 of the South Carolina Gamecocks in the first half against the Notre Dame Fighting Irish during the NCAA Women's Final Four Semifinal at Amalie Arena on April 5, 2015 in Tampa, Florida. (Photo by Mike Carlson/Getty Images)</p>

COLUMBIA, S.C. (AP) — South Carolina women's basketball coach Dawn Staley is suing Missouri's athletic director, saying he slandered her when he suggested she created an atmosphere that encouraged fans to spit on his players and use racial slurs.

Staley's lawsuit filed Thursday in Richland County asks for no more than $75,000 in damages from Jim Sterk for disparaging her reputation.

Missouri officials said they planned to comment on the lawsuit later Thursday.

The problems started the day after South Carolina's 64-54 win at home on Jan. 28. The teams have played three tough, physical games in a row, and Sterk said in a radio interview the latest game had an unhealthy atmosphere.

"We had players spit on, and called the N-word and things like that. It was not a good environment and unfortunately, I think coach Staley promoted that kind of atmosphere," Sterk said on KTGR radio.

Staley called the accusations "serious and false" right after they were made and said she lost sleep over them.

South Carolina athletic director Ray Tanner investigated, interviewing security personnel and others at the arena and found no evidence of spitting or racial slurs. He asked Sterk to retract his comments.

Sterk then gave another radio interview where he did not take back his statement or apologize, but said he was moving on.

"And kind of like in the words of that famous philosopher Forrest Gump, that's about all I've got to say about that," Sterk told 101 ESPN in St. Louis.

Staley's suit said the comments from Sterk were especially painful because they were broadcast around the world.

"Because the Defendant will not retract the slanderous allegations and has flatly refused to admit the falsity of the same, Coach Staley has no choice but to bring this action to clear her good name and excellent reputation, along with the reputation of the South Carolina fan base," attorney Butch Bowers wrote in the lawsuit.

The suit also details a number of Staley's accomplishments from her three Olympic gold medals and choice to carry the American flag at the 2004 Olympics in Athens to her place in the Basketball Hall of Fame to her national championship for South Carolina in 2017 and her seven times selected as a WNBA all-star.