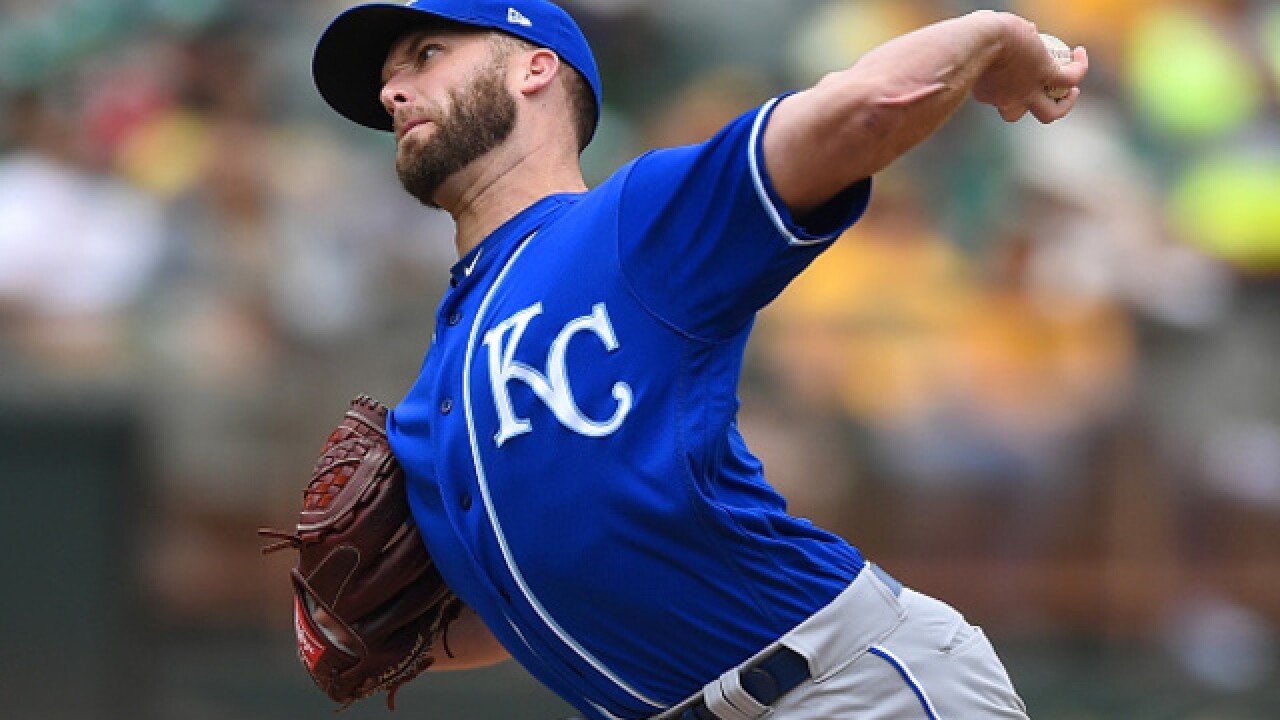 Copyright 2018 Scripps Media, Inc. All rights reserved. This material may not be published, broadcast, rewritten, or redistributed.
Thearon W. Henderson
OAKLAND, CA - JUNE 09: Danny Duffy #41 of the Kansas City Royals pitches against the Oakland Athletics in the bottom of the first inning at the Oakland Alameda Coliseum on June 9, 2018 in Oakland, California. (Photo by Thearon W. Henderson/Getty Images)

Danny Duffy  can blow away hitters with a mid-90s fastball.

He's learning that his softer stuff can be just as effective.

Duffy pitched seven innings of three-hit ball, and the  Kansas City Royals  snapped a six-game skid with a 2-0 victory over the  Oakland Athletics  on Saturday.

Royals catcher  Salvador Perez  noticed early his team's ace had a devastating change-up, and he wasn't shy about calling it -- even in fastball counts.

"You don't do that very often when you throw in the mid-90s, but it was enough to keep people off balance today."

Chris Bassitt (0-1) also allowed three hits in seven innings in his first appearance since undergoing Tommy John surgery on May 6, 2016. He struck out six and walked one, allowing one run -- on  Paulo Orlando 's RBI single in the second inning.

Orlando's hit snapped a 0-for-14 stretch.

The Royals scored again in the ninth on  Alex Gordon 's home run -- his fifth -- off  Yusmeiro Petit .

Kevin McCarthy  pitched the eighth and  Kelvin Herrera  worked a scoreless ninth to complete the four-hitter and earn his 14th save in 15 opportunities.

With the Royals' offense sputtering, manager Ned Yost shuffled the lineup, moving Gordon into the cleanup spot,  Mike Moustakas  from third to second and Perez from cleanup to third in the batting order. Gordon's homer was the only hit by the trio.

Moustakas played his 900th career game for the team -- becoming the 13th player in Royals history to reach that plateau -- and started at first base for the first time.

Bassitt was called up from Triple-A Nashville for a spot start in place of  Trevor Cahill , who is out with an Achilles injury. He didn't arrive in Oakland until late Friday night.

Bassitt is the seventh starter the A's have sent to the mound in as many days and the 11th different starter they've used this season.

The 29-year-old acknowledged he's had doubts about his baseball future.

The Royals beat Oakland for the second time in six tries this season.

Yost challenged two calls on the same play in the top of the fourth. With  Alcides Escobar  at second with two outs, Orlando hit a grounder to A's shortstop  Marcus Semien , who threw wide to first. Escobar tried to score from second on the play. First base umpire Bill Welke ruled that first baseman  Matt Olson  had applied a swipe tag on Orlando, and home plate umpire Tony Randazzo ruled that catcher  Josh Phegley  tagged out Escobar. The play at first was overturned and the play at home was upheld after a replay review that lasted 3 minutes, 37 seconds.