4th and 1: The number one ranked defense comes to town 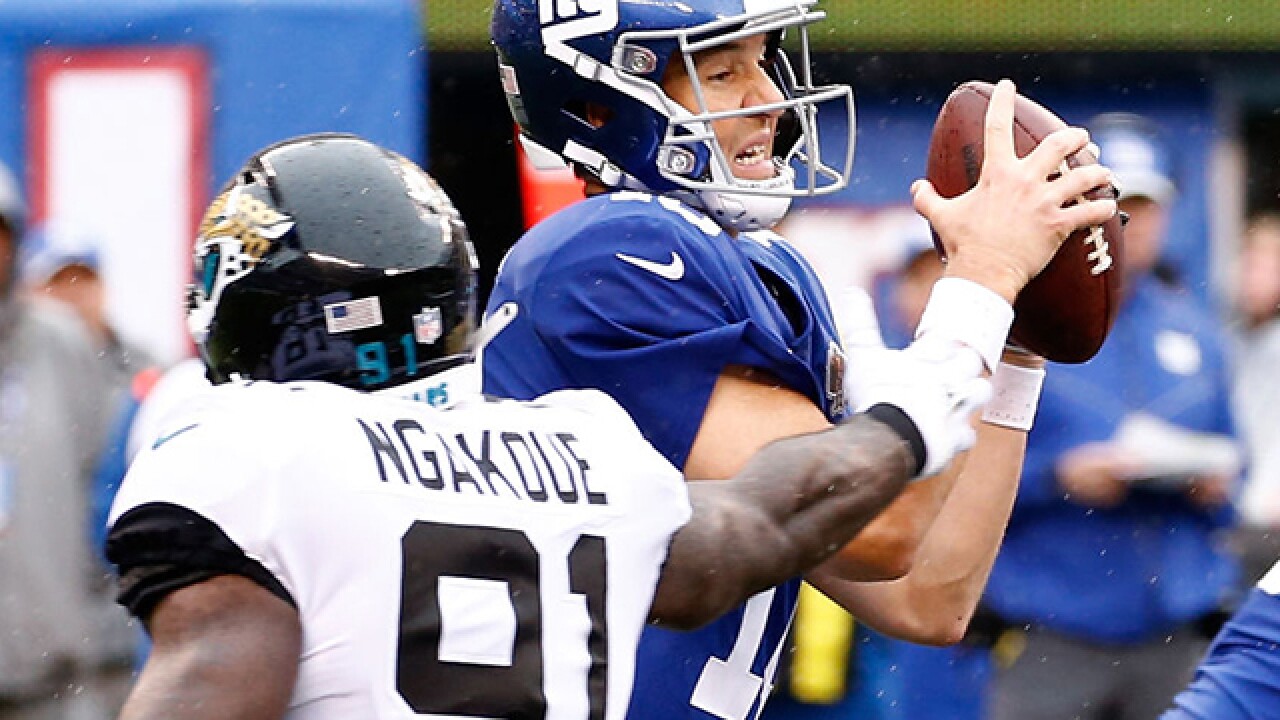 Copyright 2018 Scripps Media, Inc. All rights reserved. This material may not be published, broadcast, rewritten, or redistributed.
Jeff Zelevansky
<p>EAST RUTHERFORD, NJ - SEPTEMBER 09: Yannick Ngakoue #91 of the Jacksonville Jaguars defends Eli Manning #10 of the New York Giants in the second half at MetLife Stadium on September 9, 2018 in East Rutherford, New Jersey. (Photo by Jeff Zelevansky/Getty Images)</p>

KANSAS CITY, Mo. -- The Patrick Mahomes legend continues to grow after his come from behind victory in prime time.

It may have not been the Chiefs best overall performance but it is one that makes them battle tested if they are able to reach the playoffs in January.

Mahomes faced his most aggressive attack yet and the Broncos created another piece of the blueprint for how to slow down the Chiefs high-scoring offense.

Andy Reid and his first overall in point-per-game attack get to welcome arguably their toughest defensive challenge of the season in the number one ranked Jacksonville Jaguars this Sunday.

1. Testing Mahomes patience and speeding up his clock

The Jaguars have dropped back into a lot of zone coverage this season and trust their front four to reach the quarterback while they keep everything in front of them. Jacksonville has one of the most athletic back sevens in the NFL and leave little room for error. The Jaguars will likely take pages from the Bears, 49ers and Broncos attack of Mahomes. Denver was set on taking the offense out of their rhythm by taking away Travis Kelce and Tyreek Hill early.

The next phase was to bring overload blitzes, show looks where Mahomes didn't know if seven defenders were coming or four. Denver brought some delayed blitzes, showed overloads on both sides and schemed up some A gap blitzes to force Mahomes to make a decision before he was ready. The Jaguars will test if the Chiefs offensive line and Mahomes have improved on blocking those looks. The next thing Jaguars defensive coordinator Todd Wash might do is either add a contain or spy to Mahomes right side on potential scrambles.

They will want to take away his ability to make plays outside the pocket. This will be the next step in a defense attempting to bring the Chiefs offense and Mahomes back down to earth. Denver was a great test for the Chiefs in how to handle the rush and have patience because they are facing a front that is faster and more physical.

Blake Bortles is a quarterback that relies on his mechanics to keep him in rhythm and accurate. Offensive coordinator Nathaniel Hackett -- son of former Chiefs offensive coordinator Paul Hackett that worked under Marty Schottenheimer -- likes to utilize play-action and shotgun to get Bortles into a rhythm with check downs and intermediate crossing routes and dig routes over the middle before they build up to outside the numbers throws. Bortles wants to have the ball out of his hands by the time his back foot hits.

He has typically predetermined his throw based on his initial coverage read. He is just going through the motions to hold defenders in place. If his read was incorrect he will begin to have happy feet while standing in the pocket to attempt to keep his timing. Once it stops it is an indicator that he has made his decision of where he will be throwing. Why that is a great tell is because Bortles has a longer throwing motion than most quarterbacks to get accurate velocity on his throws.

Pass rushers have been able to use that to their advantage to time their jumps and get into his passing windows to knock down the pass or tip it for interceptions. Bortles also doesn't like the pocket collapsing in on him. He will fade back on his throws if it does. Their interior offensive line also struggles with twist and loops. If Bortles has the ball out once his back foot hits on a regular basis, the Chiefs secondary could be in for a long day.

Dede Westbrook has become Bortles' favorite target through the first four games. They love to connect on countless crossing routes. He had 13 targets, nine receptions and 130 yards in their last game against the Jets. When New York brought pressure, Bortles had Westbrook running a crossing route. He has become their most explosive play maker. Donte Moncrief and Austin Seferian-Jenkins are Bortles' second and third options, but Westbrook is his favorite target when things need a spark.

4. Respect Corey Grant and TJ Yeldon out of the backfield

Grant is their second most explosive weapon in the passing game. He will be a big mismatch for the Chiefs linebackers in coverage and if they get caught in a blitz, Bortles will check it down to Grant gleefully. Yeldon is a solid runner out of the shotgun on off-tackle runs but he is a better pass catcher in the flats and can cause problems with poor tackling and poor pursuit angles.

5.  Crossing routes and double moves will be there for the taking

The Jaguars like to drop back into zone coverage, but have been susceptible to crossing routes at the short and intermediate level when their zones are properly manipulated with certain route combinations. Teams have been able to gash them off play-action with crossing routes. A.J. Bouye also has a tendency to play aggressive and can easily be beat with the double move when he is playing off coverage. The Chiefs will need to be okay with a paper cut passing game and spacing out their opponent to create tight windows to throw into at the intermediate and deep levels. The defense also seems to ignore the fullback out of the flats.

6. Utilize misdirection, jet sweeps and screens for the run game

The Jaguars have a very athletic front seven that features a six-man rotation along the defensive line to keep their control of the line of scrimmage. They are stout on the edges and have the athletes to keep the stretch plays and sweeps from working. The Chiefs will have to treat their run game like they are playing the 2015 Denver Broncos. This front seven is just as good athletically and just as strong. They have been caught with the jet sweep. Teams have only run one screen at them but an additional one could go for some yardage because the Jaguars do lose some discipline. The cutbacks won't be there early but could come later in the game if the Chiefs have spaced them out enough in the passing game and worn them down a bit.

This is the toughest challenge the Chiefs will potentially face this season in terms of an overall AFC Championship caliber defense. It is a fantastic barometer to show what Mahomes learned from his Denver experience but also challenges the offensive line early enough in the season to help them make necessary improvements if they make the playoffs.

The passing offense will likely need to be quick and will lack a lot of explosiveness it showed in the first three games. That is the trade off in playing the number one defense in the NFL.

Bob Sutton and the defense will need to keep this game manageable from a points perspective because the Jaguars are giving up an average of 14 points per game. Kansas City has exceeded the expectations of many with their 4-0 start but a win against Jacksonville could solidify them in the eyes of many around the league.

Nick Jacobs can be found on Twitter: @Jacobs71 and can also be heard on the 4th and 1 podcast brought to you by 41 Action News. 4th and 1 is available on iTunes, Google Play  and TuneIn.