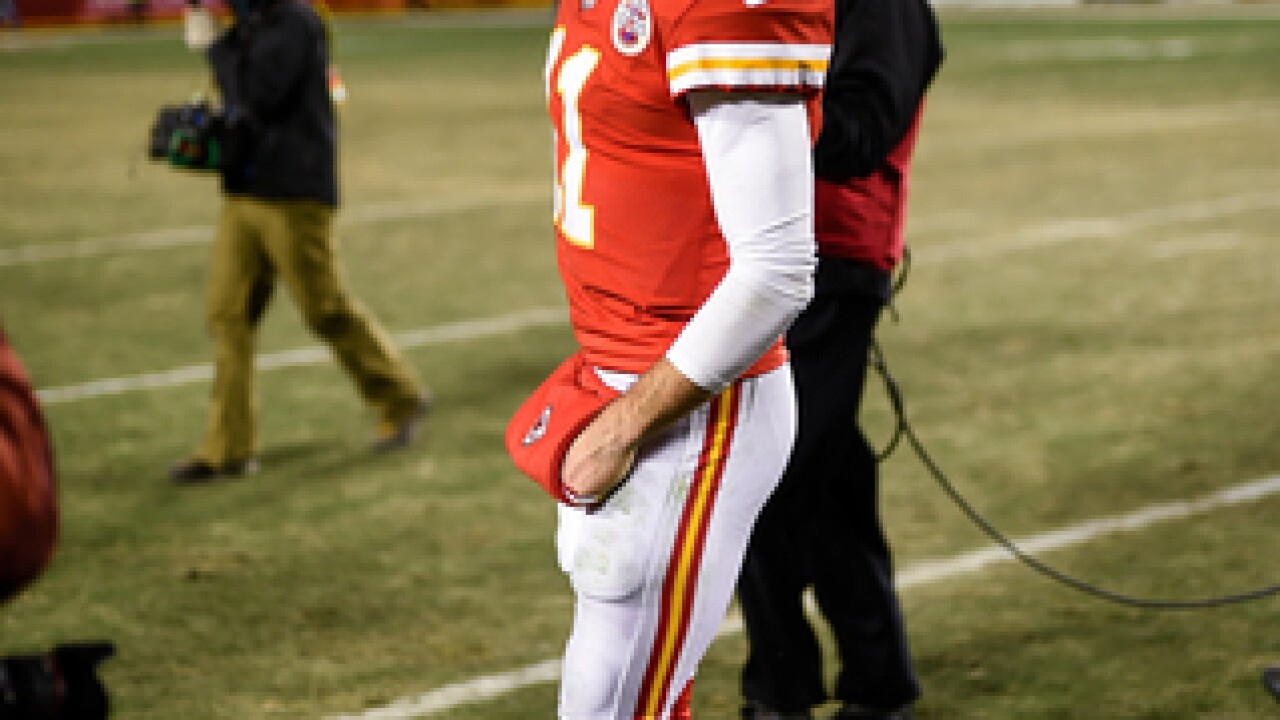 Copyright Getty Images
Jason Hanna
<p>KANSAS CITY, MO - JANUARY 6: Quarterback Alex Smith #11 of the Kansas City Chiefs waves to the crowd as he walks off the field following the loss to the Tennessee Titans in the AFC Wild Card Playoff Game at Arrowhead Stadium on January 6, 2018 in Kansas City, Missouri. (Photo by Jason Hanna/Getty Images)</p>

Delanie Walker held the ball in the end zone and waited for his teammates to celebrate.

They came from every direction: Left, right and even the bench.

The Tennessee Titans tight end caught two touchdown passes, including an 18-yarder with 1:31 remaining , and the AFC beat the NFC 24-23 in a rain-soaked Pro Bowl on Sunday.

"That's as real as it gets in football," Oakland quarterback Derek Carr said. "You always want to win, especially with money on the line."

"You've got guys on the sidelines saying, `I need that money,"' Carr said.

Carr completed 11 of 15 passes for 115 yards and connected with Walker on a skinny post for the winning score.

Denver's Von Miller sealed the victory when he caused and recovered a fumble by Los Angeles Rams quarterback Jared Goff. Miller posed problems all afternoon for the NFC.

"I go all out all the time," Miller said.

Although the game was more two-hand touch than hard-nosed football, there were plenty of defensive gems.

None of those plays compared to Miller's game-clinching strip-sack.

"I knew Von was going to do it," Broncos teammate Aqib Talib said. "When it's clutch time, crunch time, that's what he does. We needed a play, and Von went and did what he does."

The AFC overcame a 17-point halftime deficit and four turnovers to win the annual all-star game.

Heavy downpours were partly to blame for the sloppiness.

The rain prompted some fans to leave Camping World Stadium and others to break out ponchos. It also caused players on both sidelines to scramble to protect cellphones.

Jordan, New Orleans running back Mark Ingram and others had their phones in hand during introductions, and dozens more could be seen using them on the sidelines early in the game. They shoved them in plastic bags as the rain started.

Carr made up for his mistake by completing a 12-yard pass to Miami's Jarvis Landry on a fourth-and-7 play in the waning minutes. He found Walker down the middle three plays later.

Walker was voted the offensive MVP, and Miller was the defensive MVP. Both got luxury cars to go along with trophies.

"He's a Super Bowl MVP and now a Pro Bowl MVP as well," Talib said of Miller. "Another accolade for him. The more accolades you get, the more people expect from you."

The NFC looked like it would coast to a victory early as two Minnesota Vikings made big plays a week earlier than they wanted (Super Bowl) and a week later than they needed (NFC championship game).

Adam Thielen had a touchdown reception on the opening drive, and Smith returned an interception 79 yards for a score as the NFC opened up a 20-3 lead at halftime.

But the NFC failed to hold onto the lead. Goff threw incomplete on two fourth-down passes late as Saints coach Sean Payton tried to keep drives alive and milk the clock.

That was the opening Carr, Walker and Miller needed.

"I think it makes it more exciting for the fans for us to put on a show like that and go down to the last minute and win the game," said Walker, who also caught a 4-yard TD pass from Smith in the third.