ANALYSIS: Two long-time Chiefs WRs could be on the way out 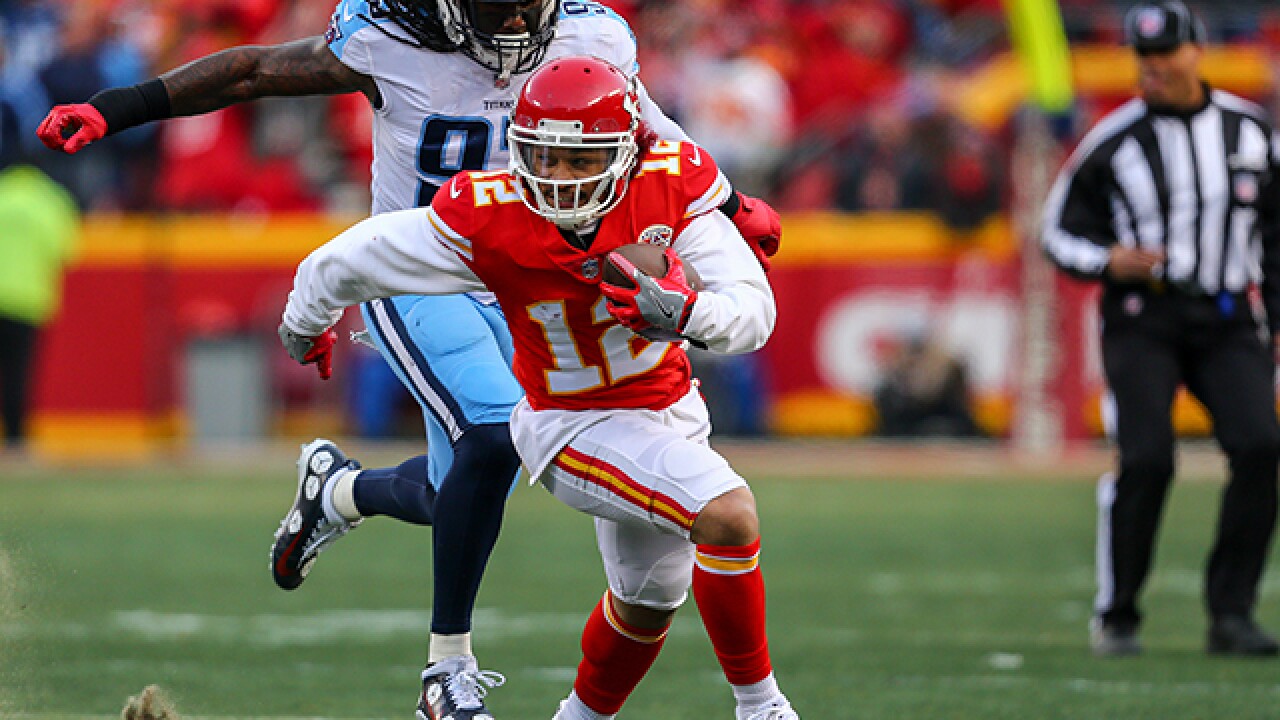 Copyright 2018 Scripps Media, Inc. All rights reserved. This material may not be published, broadcast, rewritten, or redistributed.
Dilip Vishwanat
<p>KANSAS CITY, MO - JANUARY 6: Wide receiver Albert Wilson #12 of the Kansas City Chiefs runs away from would be tackler linebacker Erik Walden #93 of the Tennessee Titans after a reception during the first quarter of the AFC Wild Card Playoff game at Arrowhead Stadium on January 6, 2018 in Kansas City, Missouri. (Photo by Dilip Vishwanat/Getty Images)</p>

KANSAS CITY, Mo. — Following the combine, the Chiefs turn their focus to their free agents. The team may not sign everyone.

Dustin Colquitt, Punter - Colquitt has been with the Chiefs since the 2005 draft but his status is currently in jeopardy. He had some inconsistencies by his standard punting the football this season. Colquitt had a handful of shanked punts and lacked his consistent hang time during his previous 12 seasons. Colquitt is still a high quality punter but the price will need to likely be less than his $4.9M cap number last season otherwise a cheaper replacement will be joining in the near future at a fourth of that price.

Anthony Sherman, Fullback - The emergence of Kareem Hunt could provide the Chiefs with a strong reason to keep Sherman on the roster. He is a solid run blocking fullback and good pass protector when given the opportunity. The seven-year veteran is very effective on special teams seeing more than 74% of the total snaps.

Jarvis Jenkins, Defensive Line - Jenkins saw a steady increase of snaps down the final stretch of the season. He was solid against the run and showed a burst of athletic ability when used in a rotational purpose.

The Chiefs begin the next phase of the off-season. There is a little over a week until free agency officially begins at 3pm CT on March 14th. The contracts below will expire at that time and all the players will become free agents unless a new deal is agreed upon before then or a tender is placed on the two restricted free agents listed as RFA below.

Here are the potential chances some of these familiar faces return.

Zach Fulton, Center  - Fulton provided the Chiefs with arguably their best option at center. He maintained the integrity of the pocket on his sets. Fulton was strong in his run blocking and violent in his combination blocks. All the traits you would like in a power blocking center. He lacked the desired athletic ability to pull in space and play the guard positions with the Chiefs blocking requirements. Fulton would be a desirable addition for a power run blocking team if he hits the open market.

Rakeem Nunez-Roches, Defensive Line (RFA) - The Chiefs will need to tender the restricted free agent with a 1st round tender ($4.1M) , second round tender ($2.9M) or a low tender ($1.9M). What the tender means is that if another team signed the player to an offer sheet, the Chiefs could elect not to match it and receive immediate draft compensation at the level the player was tendered. A low tender would be the compensation a player was originally drafted which in Nunez-Roches case would be a sixth round pick. Nunez-Roches originally came into the league with the ability to shoot gaps as a pass rusher in sub-package situations. He has since grown into a well-rounded defensive lineman with improved strength, solid against the run and a combination of pass rushing moves. He struggles to consistently split double teams which will need to be improved if the Chiefs utilize him as a regular starter in sub-packages.

Bennie Logan, Defensive Line - The Chiefs were looking for a short term replacement at the nose tackle position. Logan was solid against the run initially but wore down as the season stretched on. He likely belongs as a rotational player in a 43 scheme.

Albert Wilson, Wide Receiver - The undrafted free agent has his opportunity to earn his biggest payday yet on the open market. Wilson's career in Kansas City can be described best as inconsistent. He performed well enough to earn a spot on the active roster his first season but never really mastered the finer points in technique as a receiver. Wilson moves around as both an outside and slot receiver but never really found a consistent home where he looked comfortable. The veteran came on strong during a contract season but the biggest concern will likely be if goes into another lull once he receives his new contract.

Tyler Bray, Quarterback - The Chiefs developmental quarterback unfortunately never panned out despite five seasons of investment from the organization. Bray has a big arm to throw the deep ball and great velocity when the ball comes out of his hand. Unfortunately he appears to struggle at reading a defense five seasons later and its likely best for the organization to head in a different direction.

C.J. Spiller, Running Back - Spiller was known more for the amount of times he was waived or re-signed to the roster than plays on the field. He showed occasional burst in training camp but appeared to lack the ability to maintain the burst consistently throughout games.

Stefan Charles, Defensive Line - Charles was signed just before the Chiefs' wildcard playoff game so there isn't much tape to go off of in their scheme.

Phillip Gaines, Cornerback - Gaines showed promise during his rookie year in the league but after his torn acl during his second season derailed that promise. The fourth-year veteran appeared to lack closing speed after recovering from his injury and never appeared to be comfortable as a corner. Teams regularly threw his way when they saw him on the field.

Jordan Devey, Offensive Line - Devey has the versatility the Chiefs like in his ability to play at both guard spots and center but he is veteran minimum depth with minimal upside.

De'Anthony Thomas, Wide Receiver - Thomas has yet to consistently make impact on the roster. He has not seen 200 offensive snaps during any of his four seasons with the team. Tyreek Hill cleared that bar by more than 200 snaps his rookie season. Thomas reportedly broke his tibia in the Chiefs' final regular season game against the Broncos. Thomas was a great gunner on punts but lacks in a majority of other positions to contribute on a routine basis.

Kevin Pierre-Louis, Inside Linebacker - The Chiefs needed to find a coverage linebacker that had the speed to help in sub-packages but also shed blocks. Pierre-Louis was brought over in a trade because of that skill set. Unfortunately the defensive line's inability to keep offensive linemen from reaching the second level on blocks hurt Pierre-Louis from being able to utilize his speed chasing down defenders. The fourth-year veteran struggled to get off blocks and didn't blitz a great deal in the scheme. Pierre-Louis is a solid special teams performer but will likely need to look for a new home in a 43 scheme.

Terrance Mitchell, Cornerback - Mitchell saw himself rotated with Gaines, Acker and Revis at the outside cornerback position throughout the season. That unfortunately is never a good sign when the team lacks a number two corner.

Kenneth Acker, Cornerback - Acker was a solid special teams performer during his time in Kansas City but the Chiefs likely need to upgrade the depth overall.

Ramik Wilson, Inside Linebacker (RFA) - Wilson was given the opportunity to grab hold of the starting inside linebacker position next to Derrick Johnson. The Chiefs allowed him to compete in OTAs, mini-camp, training camp and three preseason games before they upgraded with the addition of Reggie Ragland through a trade with the Bills. Wilson struggled to get off blocks during his defensive snaps on the field and looked stiff at times turning his hips and dropping into coverage. Wilson is likely better suited for a 43 middle linebacker position in another town.

Other teams can officially begin negotiating with pending free agents on Monday, March 12th at 11am CT until free agency begins on Wednesday, March 14th at 3pm CT. Chiefs General Manager has a potentially busy month ahead of him.