Chiefs draft board geared toward days 2, 3 of draft 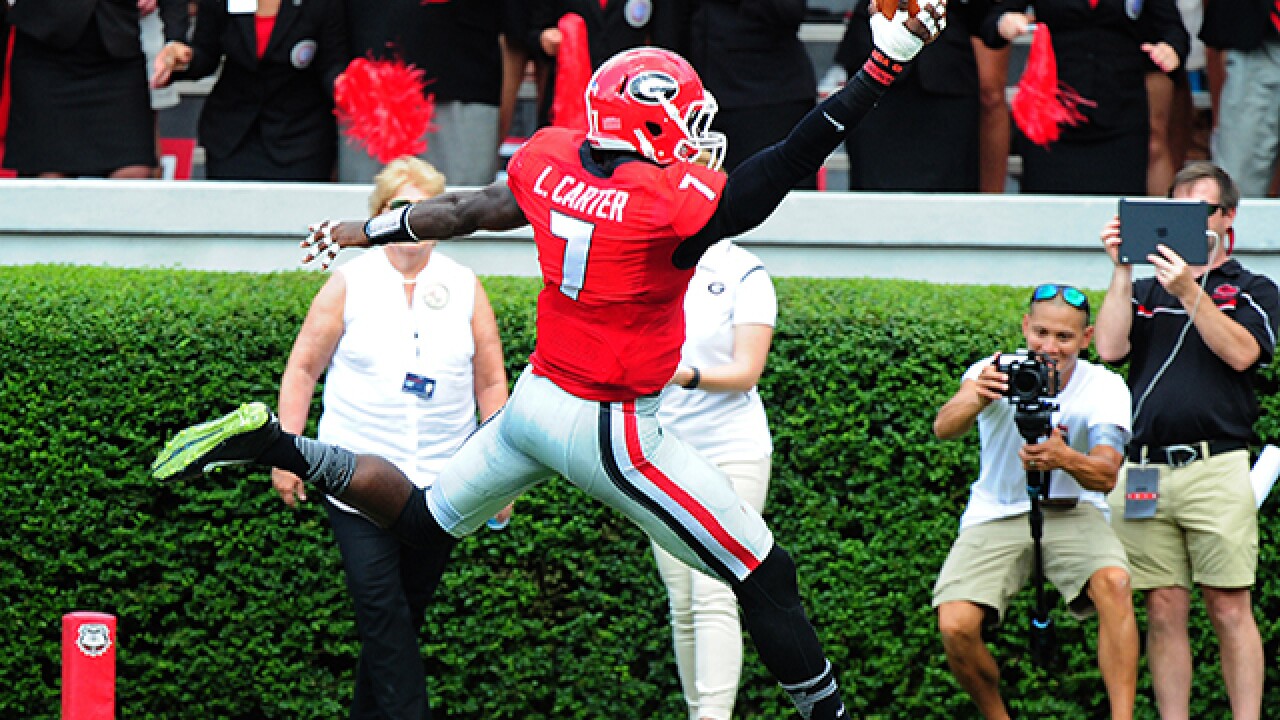 Copyright 2018 Scripps Media, Inc. All rights reserved. This material may not be published, broadcast, rewritten, or redistributed.
Scott Cunningham
<p>ATHENS, GA - SEPTEMBER 10: Lorenzo Carter #7 of the Georgia Bulldogs celebrates as he scores a touchdown on a fumble recovery against the Nicholls Colonels at Sanford Stadium on September 10, 2016 in Athens, Georgia. (Photo by Scott Cunningham/Getty Images)</p>

KANSAS CITY, Mo. – Tonight marks the opening night of the 2018 NFL draft, and while the Chiefs have a seat at the table, they may not order anything from the menu right away.

The Chiefs lack a first round pick after trading it away in 2017 to move up to select quarterback Patrick Mahomes from Texas Tech.

Several other moves opened up additional draft picks later on in the draft:

Here is a snapshot of what Chiefs General Manager Brett Veach could do if they stay at their current position with their eight picks:

2nd Round, 54th overall: OLB Lorenzo Carter, Georgia
With their initial pick, the Chiefs are able to grab an edge rusher with a high ceiling. Carter does not quit on plays and will sprint downfield to catch the ball carrier. He has good bend, even better close and solid power to go with his punch. Carter reads the backfield well and is willing to set the edge to force plays back inside. The former Bulldog plays with the necessary attitude needed and is solid in coverage for his size.

3rd Round, 78th overall: DE Maurice Hurst, Michigan
Hurst’s heart condition will determine how far he drops in the draft from the 20 range in the first round. He has great size and athletic quickness on tape. Hurst is smooth on his loops and twist as well as his timing of when to correctly hit it. The former Wolverine closes well for his size. He has a powerful bull rush and a savvy dip and rip technique to get off blocks and disrupt opposing offenses.

3rd Round, 86th overall: CB MJ Stewart, North Carolina
Stewart is a slot or nickel corner. He is good in coverage and doesn't panic in the circumstances. Stewart trusts his technique and doesn't start to grab. He is a great blitzer off the edge and has closing speed that is a problem for opponents. The former Tar Heel plays with an attitude and approaches every play with the same intensity.

4th Round, 122nd overall: OG Braden Smith, Auburn
Smith was one of the top recruits coming out of the Kansas City area four years ago out of Olathe South. Smith's strength and athletic ability translated well into college. He plays with a mean streak and wants to bury his opponents into the ground with pancake blocks. Smith has quick feet in pass protection. He is a good pulling guard and drives defenders off the ball with his strength.

4th Round, 124th overall: S Armani Watts, Texas A&M
Watts closing speed is a unique trait. The amount of ground he can cover in an urgent situation is impressive. He looks natural in coverage and has the range to be moved all over the field. The former Aggie is also an effective blitzer with his closing speed.

6th Round, 196th overall: C James Murray, Holy Cross
Murray is a versatile offensive lineman. He played both left tackle and center at Holy Cross. Murray has the athletic ability the Chiefs have typically been drawn to. He gets out into space quickly on screens and pulls. Murray is a violent blocker - he wants to pancake defenders on every play or viciously chip block them into the ground. He continually attempts to get into better position on his reach blocks and performs combination blocks very well. Murray with the right strength coach and development could be a steal for any NFL team.

7th Round, 233rd overall: TE Jordan Akins, UCF
Akins has a combination of great size and good athletic ability. He isn't stiff in and out of his breaks, but he is smooth for his size and stature. Akins has would provide another mismatch to the Chiefs offense with his combination of speed and explosiveness.

7th Round, 243rd overall: OLB Darius Jackson, Jacksonville State
Jackson has good speed around the edge and a solid bend combined with his dip and rip technique. He isn't a finished product which is why he will likely last this long, but he has the athletic ability to be effective in Bob Sutton's system.