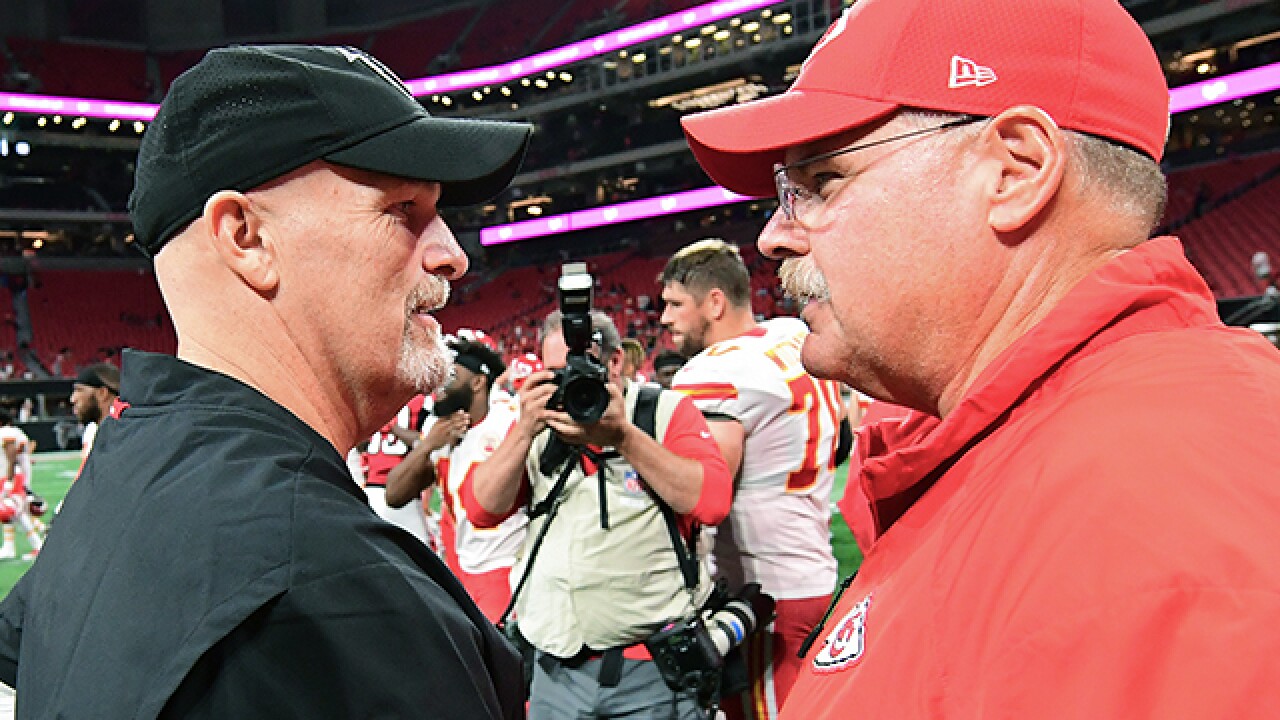 Copyright 2018 Scripps Media, Inc. All rights reserved. This material may not be published, broadcast, rewritten, or redistributed.
Scott Cunningham
<p>ATLANTA, GA - AUGUST 17: Head Coach Andy Reid (R) of the Kansas City Chiefs is congratulated after the game by Head Coach Dan Quinn of the Atlanta Falcons after a preseason game at Mercedes-Benz Stadium on August 17, 2018 in Atlanta, Georgia. (Photo by Scott Cunningham/Getty Images)</p>

ATLANTA (AP) — Friday night’s preseason game in Atlanta featured the veteran – Falcons quarterback Matt Ryan – and the newbie – Chiefs quarterback Patrick Mahomes - and both had positives to take away from the game.

Ryan guided the Atlanta Falcons right down the field for a touchdown on their first possession, hooking up with Austin Hooper on a 4-yard scoring pass , and led another impressive drive before calling it a night in a 28-14 loss to the Kansas City Chiefs.

Alex Smith's replacement was intercepted on a deep throw by Falcons safety Damontae Kazee , who drifted over from the middle of the field to pick a ball intended for Sammy Watkins. Mahomes caught a break when another ill-advised throw into the end zone was dropped by Falcons cornerback Blidi Wren-Wilson, allowing the Chiefs to salvage a field goal.

But, with just 17 seconds left in the first half, Mahomes made the most of his final pass. Three Atlanta defensive backs inexplicably allowed Tyreek Hill to get behind them, and Mahomes delivered the pass in stride for a 69-yard touchdown .

"I don't think I've ever thrown one that far in a game," said Mahomes, who finished 8 of 12 for 138 yards. "I don't know many people that would be able to catch that ball going that far in a game. I told (Hill) if I had thrown a spiral, he wouldn't have been able to get to it. He disagreed with that."

Chad Henne took over for at quarterback to begin the second half. He connected with Gehrig Dieter on a 27-yard touchdown that put the Chiefs (1-1) ahead for the first time, capping a 10-play, 76-yard drive.

Ben Niemann finished off the scoring with a 26-yard interception return for a touchdown after picking off a horrible throw by Atlanta's third-string quarterback, undrafted rookie Kurt Benkert.

"He overthrew it and gave me a gift," said Niemann, also an undrafted rookie.