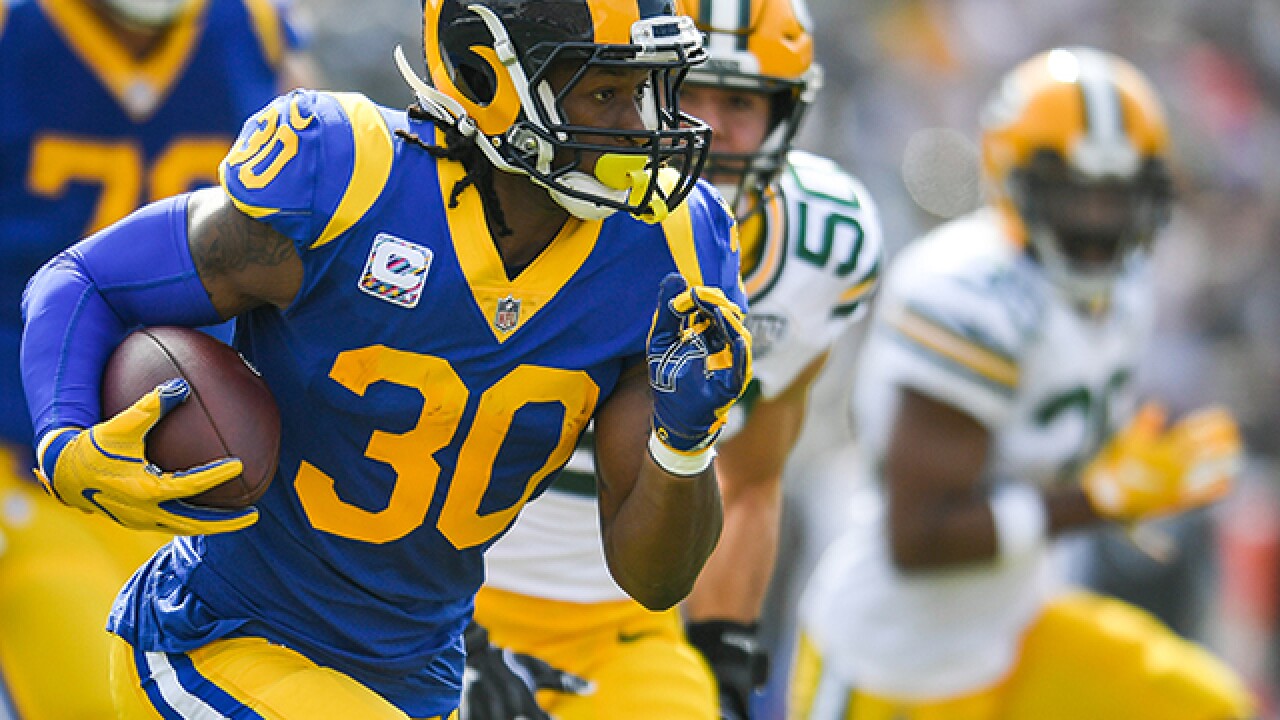 KANSAS CITY, Mo. — Finally, the game that’s been marked on many calendars for the past few months has arrived.

The Kansas City Chiefs head to Los Angeles for a primetime matchup against the Rams as Monday Night Football returns to the LA Memorial Coliseum for the first time since Oct. 28, 1985.

That was one day after the Royals won their first World Series for some perspective.

The matchup between a pair of 9-1 teams pits the second- and third-best scoring offenses in the NFL.
Here’s what the Chiefs must do to emerge with the victory:

Running back Todd Gurley is the difference maker in the Rams’ offense.

Athletically, he can cover 10 yards very quickly, but he also can also be effective catching passes in the flats. The Rams probably will want to isolate the Chiefs’ linebackers on Gurley in the passing game with pick routes and the angles of the route.

Gurley is at his best when he can run north and south, but teams have had success when they stretch him out from sideline to sideline.

The Chiefs’ defense has struggled against double teams and maintaining gap discipline on the interior, so the Rams’ rushing attack likely will be used to maintain ball control and limit the number of possessions for the Chiefs’ offense.

The combination of Aaron Donald, Ndamukong Suh and Michael Brockers presents a tough task for the Chiefs’ interior three along the offensive line.

The Arizona Cardinals were able to get consistent pressure by running twists at the center and guards along with isolating left guard Cameron Erving and center Austin Reiter.

Expect Rams defensive coordinator Wade Phillips to try and collapse the interior of the pocket on Chiefs quarterback Patrick Mahomes.

The Chiefs’ passing offense will only be as effective as their interior protection allows them to be.

Otherwise, the Chiefs will have to counter by getting the ball out quick in shotgun or moving the pocket and running bootlegs to gain traction if the interior offensive line struggles.

Los Angeles quarterback Jared Goff has a good feel for the pocket. He knows where to step up and is comfortable moving around and resetting his feet before making throws when necessary, but teams have had success collapsing the pocket around him with five defenders.

Opposing defenses have had the most success using wide nine and wide three tech to accomplish that goal effectively with a down-and-distance of more than 7 yards. Opponents often show a look that may include six or seven defenders but rarely do they bring more than five.

Rams left tackle Andrew Whitworth struggles against speed rushes and is susceptible to getting beat around the edge, but he rarely gets beat inside one-on-one.

Whitworth and left guard Rodger Saffold do not have the best chemistry picking up and passing off twists. Defenders either spilt them or get around Whitworth when he is trying to pass off the defender.

Kansas City also can run loops at the left guard from two shades over.

If the Chiefs’ pass rush can play with the same intensity as last week and attack the Rams’ weak points described above, they could be looking at another four- to five-sack game.

To run the ball against the Rams, teams have found success by doubling Suh and running away from the strong side. Some teams also have brought in an additional offensive lineman as the right end to provide six reliable blockers.

Runs with a pulling offensive lineman can be effective if Donald and Suh are down blocked for them to work.

The Chiefs also can utilize a two-tight-end set to double Donald, Suh and Brockers on the interior and there’s an opportunity to run some trap plays on Suh. The draw will be there if the Chiefs widen out Donald and Suh when they are getting up field.

5. Hit CB Marcus Peters with the double move, run at him

Former Chiefs cornerback Marcus Peters, who was traded to the Rams in the offseason, isn’t seeing the same safety help over top that he was given in Kansas City. He still likes to take the same chances but risks giving up big plays when using double move on routes.

The Rams play Peters a blend of off and soft coverage, which he routinely played in Kansas City, along with some press coverage. But he struggles with his jams at the line of scrimmage and will get beat on a more routine basis if he isn’t in off coverage.

The key on the double move is the pump fake by the quarterback when the receiver plants and adds in the head and shoulder fake. Peters bites and cannot recover.

Troy Hill is also seeing more time at the outside cornerback position opposite Peters and is struggling with his press coverage. There is an opportunity to attack deep on either side because the Rams’ safeties lack range in coverage.

The Chiefs also can run effectively at Peters on jet sweeps and pitches.

6. Be on alert with P Johnny Hekker

Rarely does a punter make the game plan, but Johnny Hekker is one of the few who does. Special teams coordinator John Fassel likes to use his punter like a quarterback in certain situations.

If the Rams feel the need to change a game’s momentum, they often look to Hekker. He has taken off on runs, thrown a fade route and completed a pass for a first down.

Hekker has surprising accuracy and good zip on the ball for a punter.

For the Chiefs, this game offers a preview of a high-stakes playoff experience. The teams are evenly matched overall, so the team that best isolates the matchups listed above will come away with their 10th victory of the season.

Nick Jacobs can be found on Twitter:  @Jacobs71  and can also be heard on the 4th and 1 podcast brought to you by 41 Action News. 4th and 1 is available on  iTunes ,  Google Play   and  TuneIn . You can check out all the 41 Action News podcasts  here .