Love at first sight? Mahomes, Watkins hit it off early in Training Camp 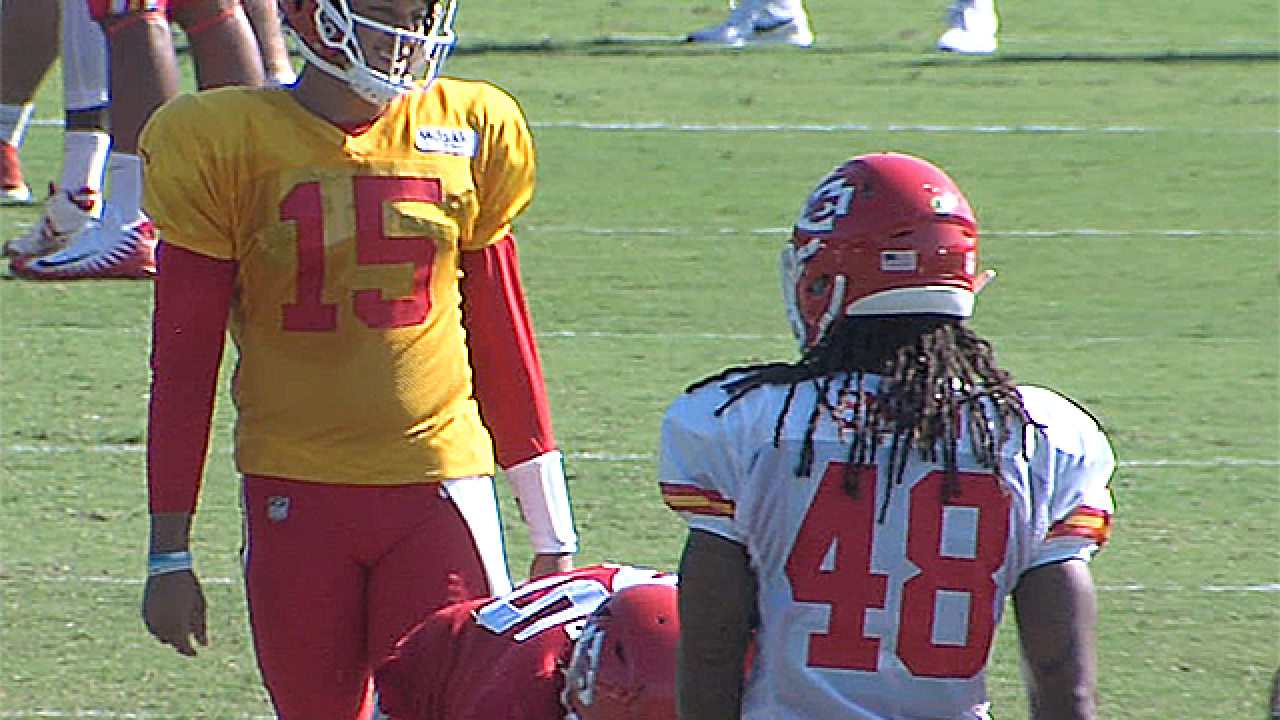 Copyright 2018 Scripps Media, Inc. All rights reserved. This material may not be published, broadcast, rewritten, or redistributed.
<p>Chiefs quarterback Patrick Mahomes is developing good chemistry with the offense so far in Training Camp. Photo by KSHB.</p>

ST JOSEPH, Mo. -- The Chiefs have completed their initial week of training camp. Their first preseason game on August 9th against the Houston Texans is inching closer. Football season is back in full swing.

There are still plenty of questions to be answered about the identity of this team and who will make the final roster but here are some impressions that jumped out during the three day venture to Missouri Western.

Chemistry in full swing
The chemistry between Patrick Mahomes and Sammy Watkins is well ahead of schedule. Watkins has an impressive catch radius and a unique ability to snag the football from difficult angles. The second-year quarterback found the 25-year-old receiver on Saturday in between two defenders with the cornerback defending in front of Watkins and still found a way to play the ball near the dirt, where either Watkins would catch it or it would be incomplete. It was a difficult catch that Watkins made look routine. Mahomes has good timing with Watkins on most of their routes and trusts the receiver to battle for any pass thrown. The chemistry they are showcasing on the field already typically takes most tandems a couple of years to develop.

The running group is stacked
Spencer Ware looks to be a little quicker than the previous seasons and appears to have confidence in his knee based on his cuts and explosion. Charcandrick West looked slower than last season and had some hiccups in pass protection before sustaining a concussion this past weekend. Damien Williams saw some opportunities with the first team offense as a pass catcher out of the flats, strong in pass protection and running in the shotgun formation. He showed a good burst, an impressive juke on Daniel Sorensen and looked comfortable in open space. Kerwynn Williams might be the Chiefs smallest back but he is arguably one of their fastest running backs on the roster. The numbers will be interesting on the final roster but Charcandrick West will be need to shine in preseason to maintain a roster spot.

The return from Achilles
Eric Berry had a good back pedal. It looked natural and confident. He appeared to trust his surgically repaired achilles based on his cuts, change in direction and lack of hesitation. The burst once he explodes looks like it is starting to return as well. Chris Conley on Saturday had a couple of cuts that showed he looks comfortable. On Sunday, he ran a deep post route thrown by Mahomes, showing an explosion on his cut that was very encouraging in terms of his progress.

Two linebackers stand out
Anthony Hitchens looked smooth in coverage on the field all three days and he is able to close quickly and loves to deliver a big hit once he arrives. Hitchens almost had an interception in redzone work and also tipped another pass that was close to being an impressive leaping interception. Tanoh Kpassagnon had a strong Saturday and Sunday. The game appears to be slowing down for the former second-round pick. Kpassagnon had two sacks against the second team when he beat the tackle off the edge with a good combination of hand fighting, a swim move and a smart dip of the shoulder. He also picked off Mahomes in zone coverage on a crossing route.

First team defense with a couple twists
Bob Sutton brought out one of his sub-packages early:

Keeping an eye on the special teams
Dustin Colquitt put on a clinic during the Monday practice. He placed the directional punts inside the 10-yard-line with ease on more than fifteen attempts. His gunners always had an opportunity to make a play. Colquitt's kick looked much stronger than how he finished the season.

The top three rotation of gunners included the following combination.

Camp may already be in full swing but the position battles are just beginning to find their footing. The Saturday and Sunday practices this weekend will be very intriguing as the Chiefs gear up for their first preseason game next Thursday.