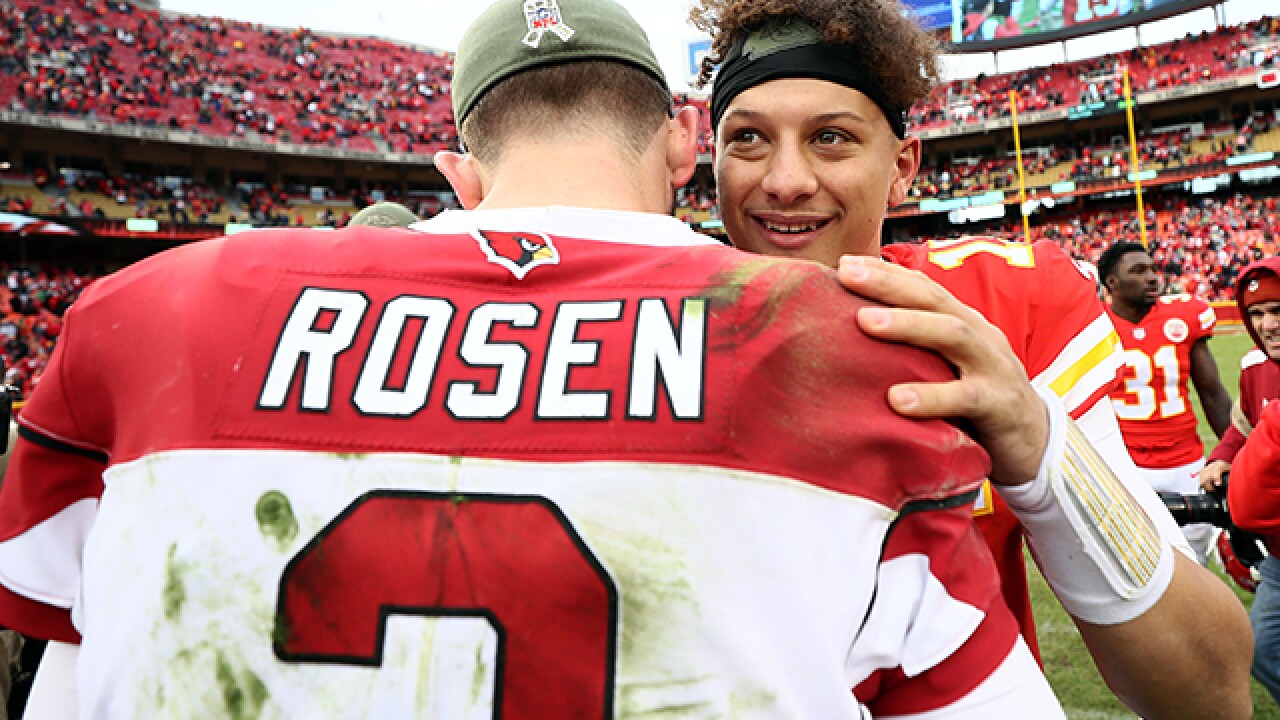 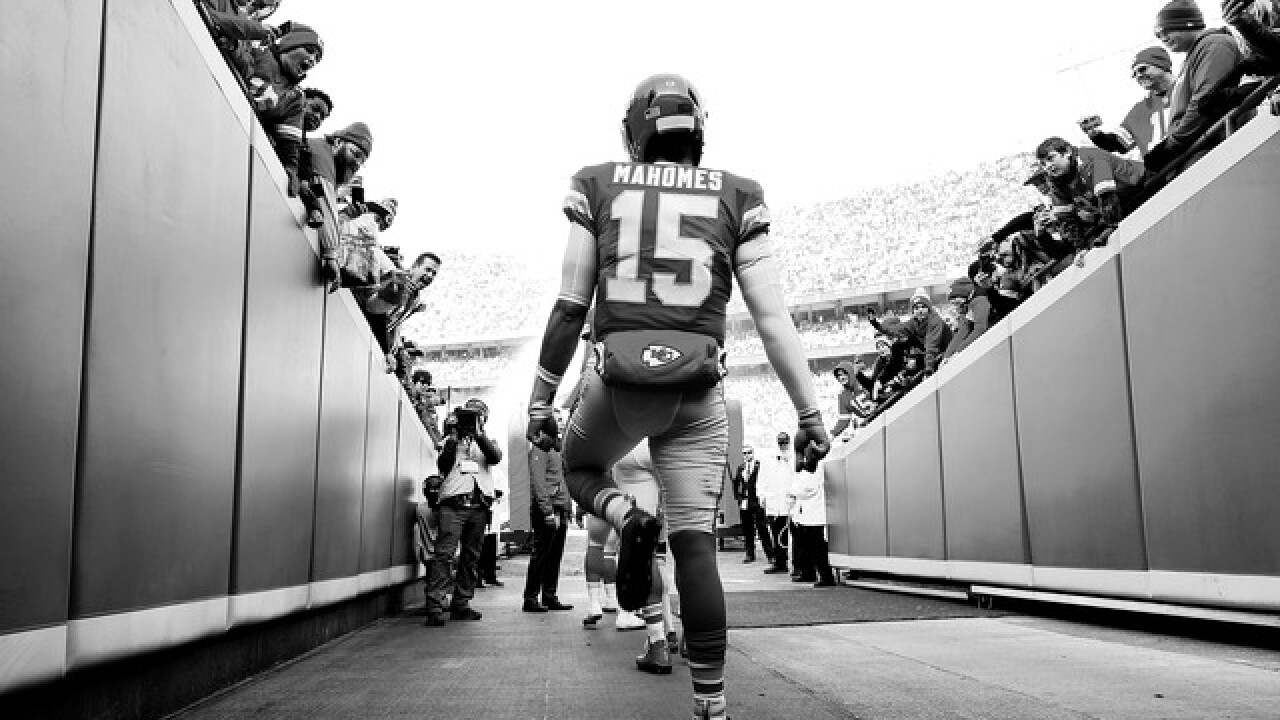 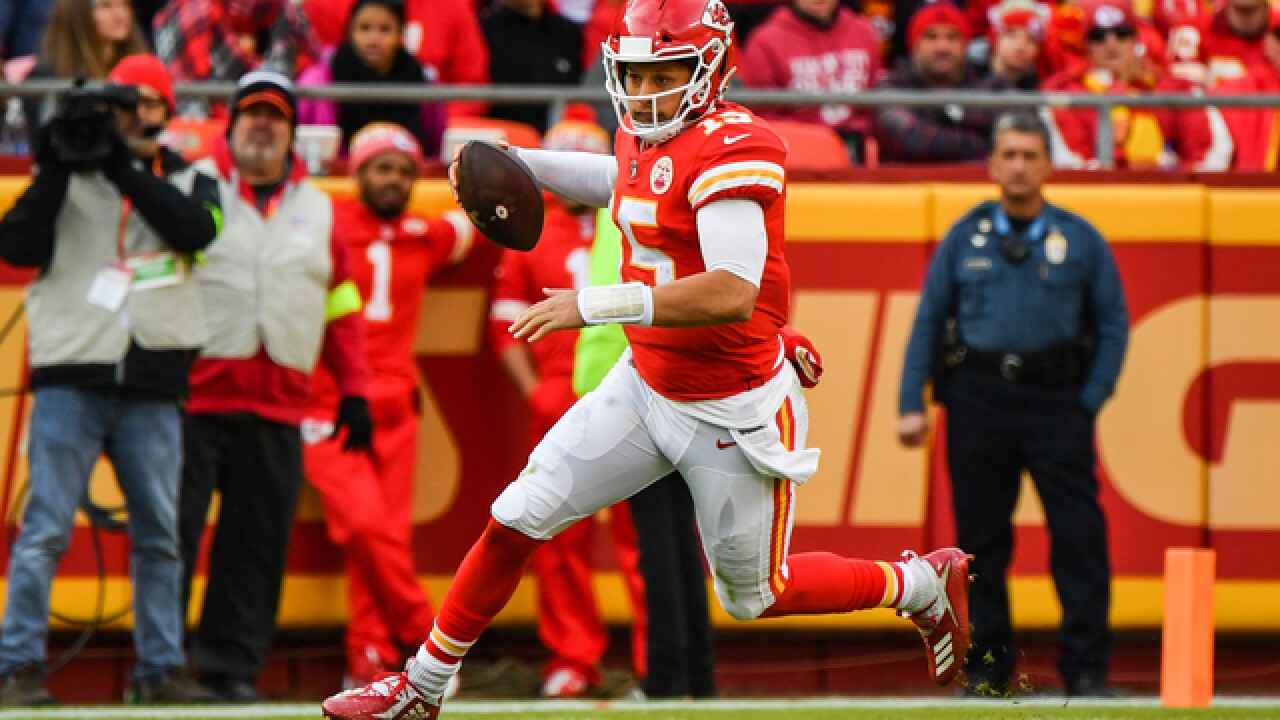 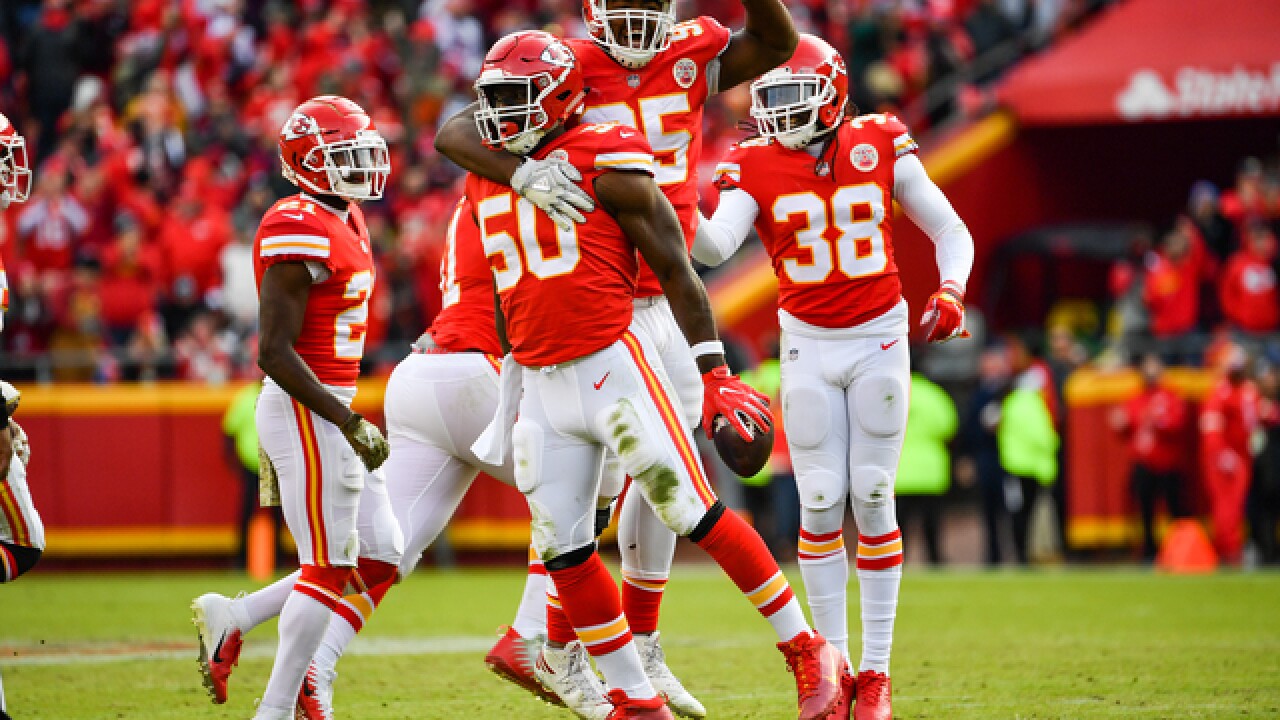 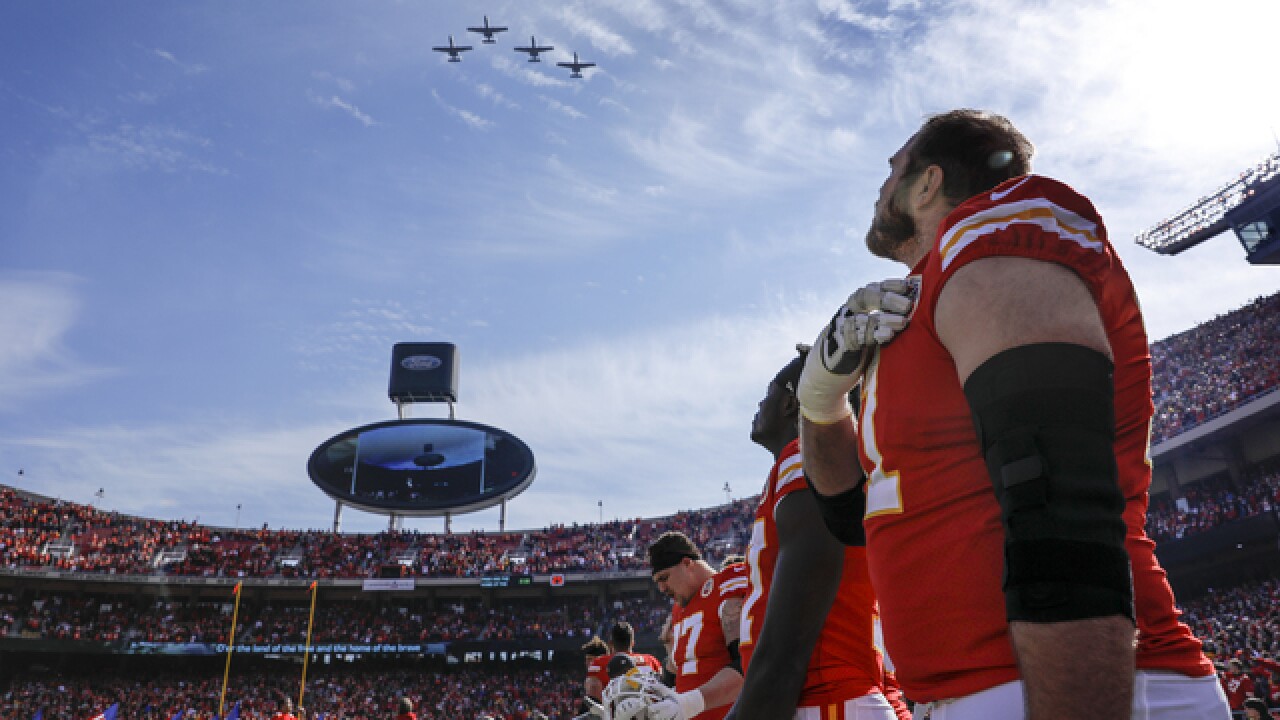 KANSAS CITY, Mo. — Patrick Mahomes will always have some special TV footage of the Kansas City Chiefs celebrating his record-setting touchdown pass in a win over the Arizona Cardinals on Sunday.

That's because Tyreek Hill was the one recording it.

Mahomes threw for 249 yards at was too with two TD strikes to Hill, but it was the second one that sent the Chiefs' first-year starter past Hall of Famer Len Dawson for the single-season TD record. It was the 31st for Mahomes — with six games yet to play — and it helped lift Kansas City to a 26-14 victory over the Cardinals and another game closer to the No. 1 seed in the playoffs.

Hill celebrated the score by leaping into the stands, then commandeering the CBS camera — earning him an unsportsmanlike conduct penalty from the officials and a sharp rebuke from coach Andy Reid.

Hill had seven catches for 117 yards. Kareem Hunt pounded his way for 71 yards rushing. The defense came up with five sacks and two picks. And the Chiefs' special teams were nearly perfect, helping to keep the Cardinals (2-7) winless in six meetings at Arrowhead Stadium.

"It was definitely a grind out there," Hunt said, "and definitely a team that was trying to come up big in a big-time win to get their program back on track, but most importantly we got the win."

Josh Rosen had 195 yards passing with a touchdown, but two interceptions and several brutal hits in the fourth quarter no doubt left a lasting impression. David Johnson ran for 98 yards with TDs on the ground and through the air, while Larry Fitzgerald had six catches for 50 yards and passed Terrell Owens for No. 2 on the NFL's career receiving yardage list in the closing minutes.

Fitzgerald has 15,952 yards in 15-year career, trailing only Hall of Famer Jerry Rice.

"I'm pretty close to T.O. His friendship and my relationship with him is valuable to me. He means a great deal to me," Fitzgerald said. "It's frustrating that it comes in another loss."

The Chiefs' weekly air show got started on the game's first play, when Hill ran right past Patrick Peterson to haul in a 38-yard reception. Two plays later, Hill ran past the rest of the Arizona defense and Mahomes found him streaking into the end zone for a 37-yard scoring catch.

Arizona answered with a time-consuming 75-yard touchdown drive of its own.

Both defenses fared better the rest of the half, with the Cardinals sacking Mahomes four times and the Chiefs' rejuvenated defense getting enough pressure to keep Rosen uncomfortable.

The Chiefs finally reached the end zone again when Mahomes zipped a third-and-goal pass into double coverage to Hill, who cradled it for his quarterback's record-setting score.

"Listen, he's had a heck of a year," Reid said of Mahomes, who was not available after the game because of a family emergency. "He's played his heart out and I love the backside of that, how he goes about his business. He has a lot on his plate as far as responsibility goes to run the offense."

As for Hill's touchdown celebration?

The Cardinals stuck with Johnson in the second half, and they slowly grinded their way to another touchdown. He carried it six times and finished a 12-play, 61-yard drive with a TD plunge to get Arizona within 20-14 midway through the third quarter.

But after the Cardinals got the ball back early in the fourth, Rosen had a screen pass picked by Justin Houston at the line of scrimmage. And instead of marching for a go-ahead TD, the Cardinals watched Spencer Ware dive in for a touchdown to extend a lead the Chiefs would never relinquish.

"Thought the guys fought to the end," Cardinals coach Steve Wilks said. "There are no moral victories in this game. All credit goes to Kansas City. Well-prepared, good football team."

"I think we did a couple things really well. We've just got to duplicate it. Our opening drives were pretty long and sustainable, and kept our defense off the field. We had pretty well-timed possessions. A little good nugget here and there, but some bad things to clean up." — Rosen.

The Chiefs lost their first coin toss all season when the Cardinals successfully called tails. They deferred to the second half, forcing Kansas City to start on offense for the first time.

Arizona hosts the Raiders next Sunday, while Kansas City faces the Rams next Monday night in Mexico City.