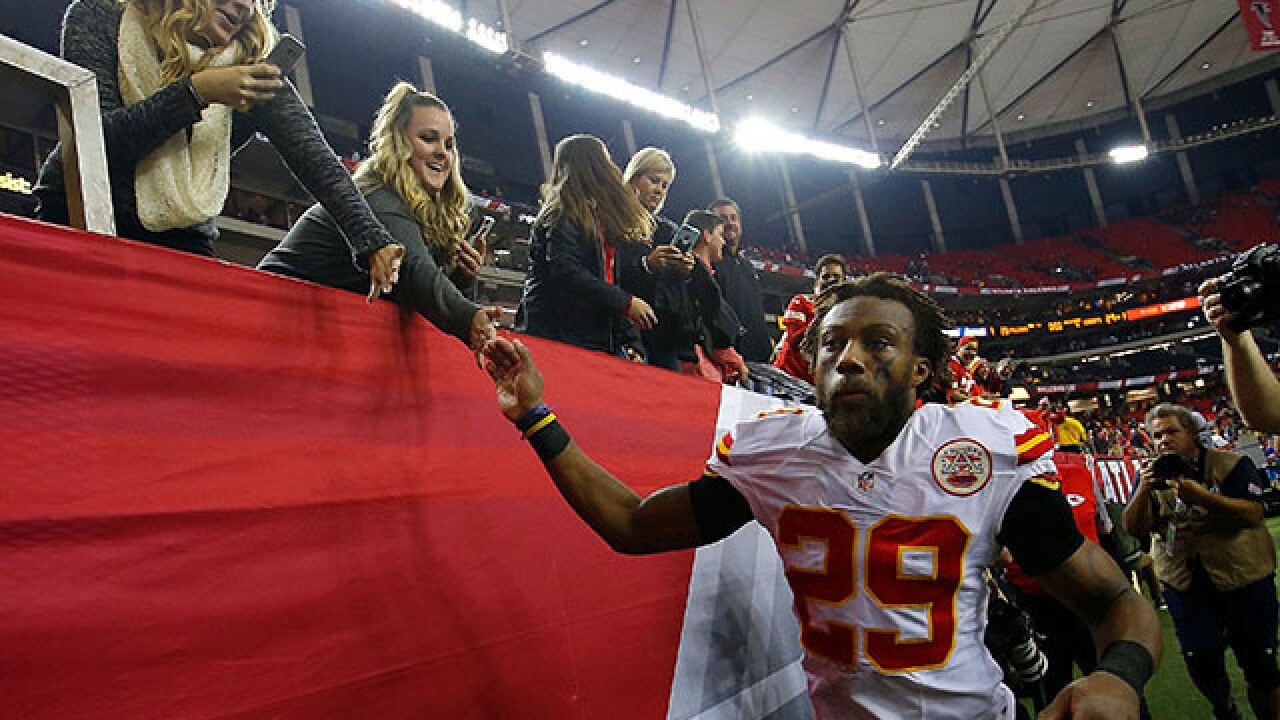 Copyright 2018 Scripps Media, Inc. All rights reserved. This material may not be published, broadcast, rewritten, or redistributed.
Kevin C. Cox
<p>Kansas City Chiefs safety Eric Berry walked off the field after a 2016 game at the Atlanta Falcons in this file photo. Berry hasn't played since suffering a torn Achilles' tendon in the Chiefs' opener last September at the New England Patriots. His status for the 2018 opener Sunday at the Los Angeles Chargers remains uncertain after missing most of training camp.</p>

KANSAS CITY, Mo. — The Kansas City Chiefs headed into training camp in late July content with a pair of veterans in Daniel Sorensen and Eric Berry as their starting safeties.

Now, there's a good chance neither will start in their season opener Sunday.

Sorensen broke a bone in his lower leg during training camp and had surgery about a month ago, and is starting the season on injured reserve. Berry has been dealing with a heel injury that not only kept him out most of training camp but sidelined him during practice on Wednesday and Thursday.

The exact nature of his injury hasn't been disclosed, but Chiefs trainer Rick Burkholder put a positive spin on it Wednesday by saying the five-time Pro Bowl selection is "getting better every day."

"We'll see if he can practice and we'll just go from there," Chiefs coach Andy Reid said. "I want to see what he's got, if and when he does that. But then I'll make the decision, what I see there."

Berry may be the only player on the entire Chiefs roster who could conceivably play without having practiced in a month. But even for him, Reid conceded, that would be asking a bit much, especially with the season opener coming on the road against Philip Rivers and the Los Angeles Chargers.

"If he doesn't practice today, which he's not, we go with the next man up and they roll. That's how we go," Reid said. "We're used to that here, just philosophically, at all positions."

So instead of having a pair of veteran starters in Sorensen and Berry, the Chiefs are poised to start Ron Parker — who was cut by the Falcons last week and re-signed with Kansas City over the weekend — and either Eric Murray or fourth-round draft pick Armani Watts.

Parker spent the past four seasons with the Chiefs before signing with Atlanta as a free agent, so he's at least familiar with defensive coordinator Bob Sutton's scheme. But he admitted it's a challenge to get up to speed in such a compressed timeframe for a division rival.

"I'm just preparing myself like I do any other time. Whatever the coaches ask, whatever they need," he said. "I feel like especially being in Bob's system and knowing what's going on, that's going to maximize my abilities. That's the good thing coming back to Kansas City."

Parker played well his first three seasons with the Chiefs but appeared to take a step back last year, and that's part of why he was released. He said a high ankle injury sustained in training camp played a part in that, and that he's glad to begin a season healthy again.

He just hopes it will be with Berry by his side.

"I've been playing with Eric," Parker said, "so I can just look over there and I don't have to say a thing. We know what each other is doing. With the other guys, we have to communicate with each other, of course. But everything is coming together."

Murray has appeared in 30 games over his first two seasons, starting twice, so he at least lends a bit of experience to the defensive backfield. Watts showed flashes in the preseason — he picked off two passes in the finale against Green Bay — but hasn't been in the regular-season fire.

It speaks volumes that Parker, who just rejoined the team, already has been peppered with questions by the rest of the young guys in the defensive backs room.

"It's difficult," he said, "but the trust those guys have in me, and the trust I have in those guys, everything will take care of itself. We'll handle our business."

NOTES: WR Byron Pringle, who hurt his hamstring in the Chiefs' preseason finale and was put on injured reserve, had an MRI exam that also revealed a hernia. Burkholder said the rookie underwent surgery Tuesday. "He has an extended recovery ahead of him, and in the meantime the hamstring will heal," Burkholder said. ... Burkholder said Sorensen continues to do rehab work in the pool, but it will be a couple more weeks before the Chiefs have a timetable for his return. "He's where he's supposed to be right now," Burkholder said.