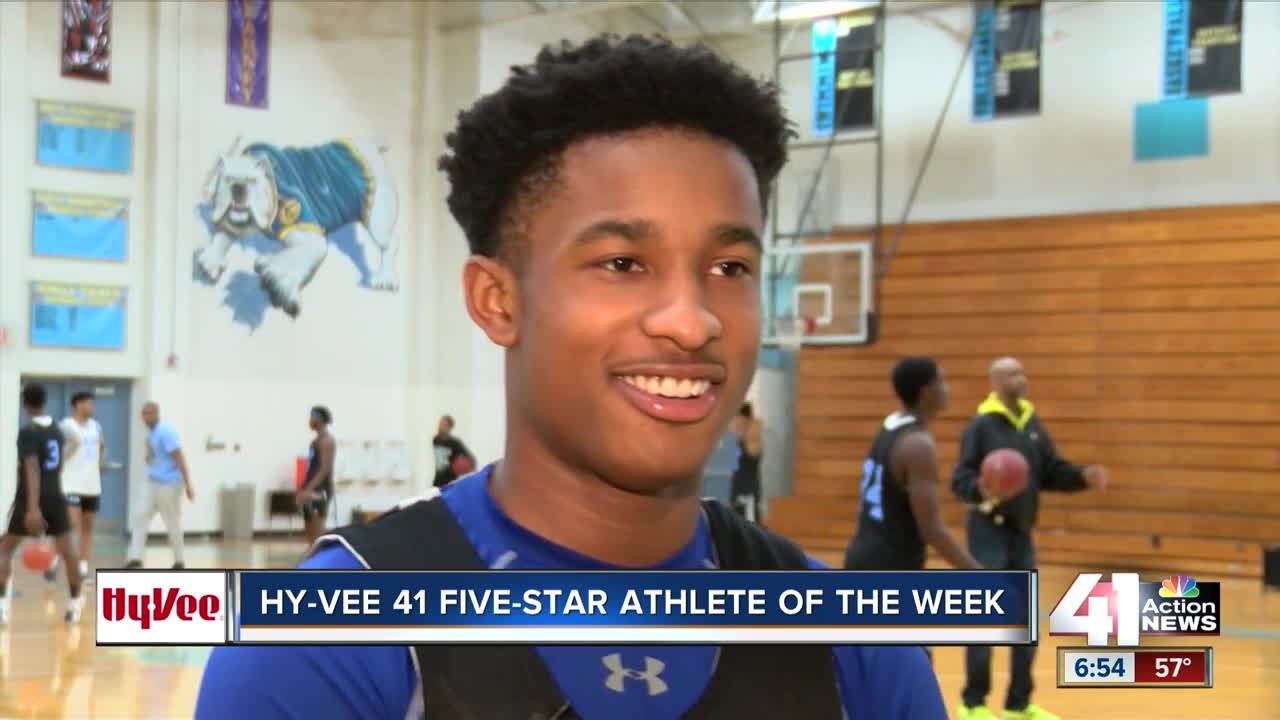 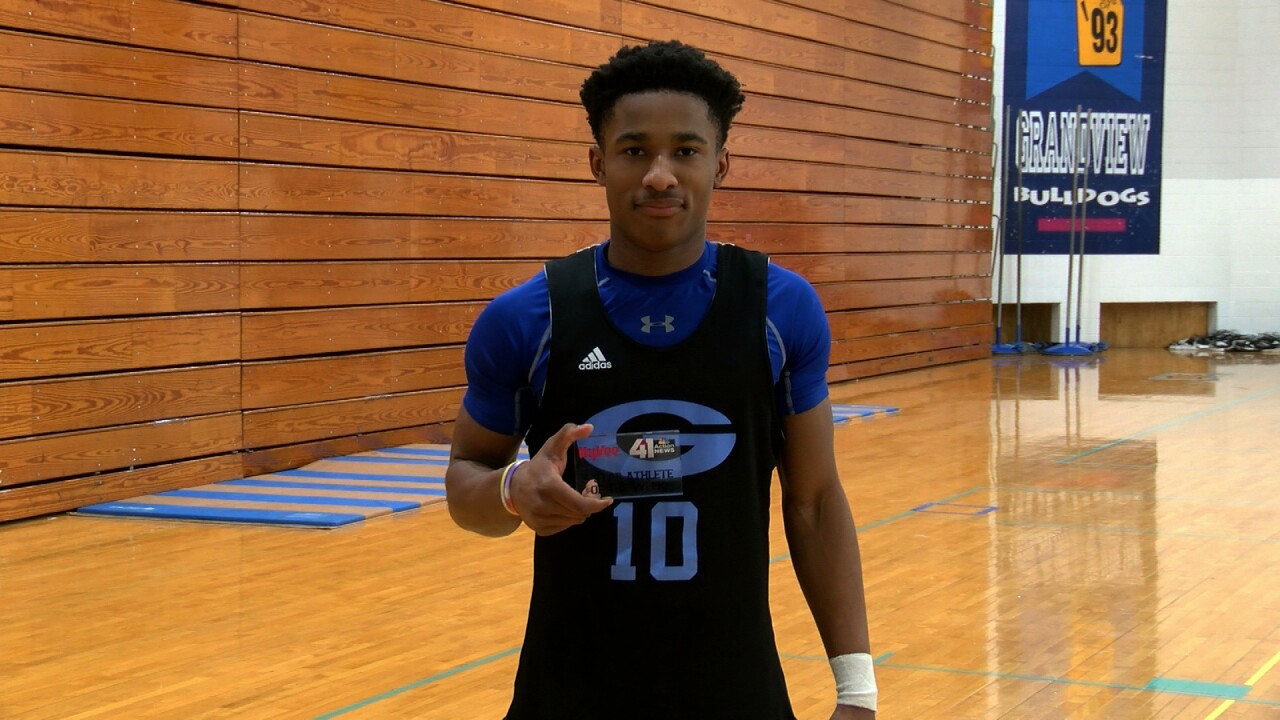 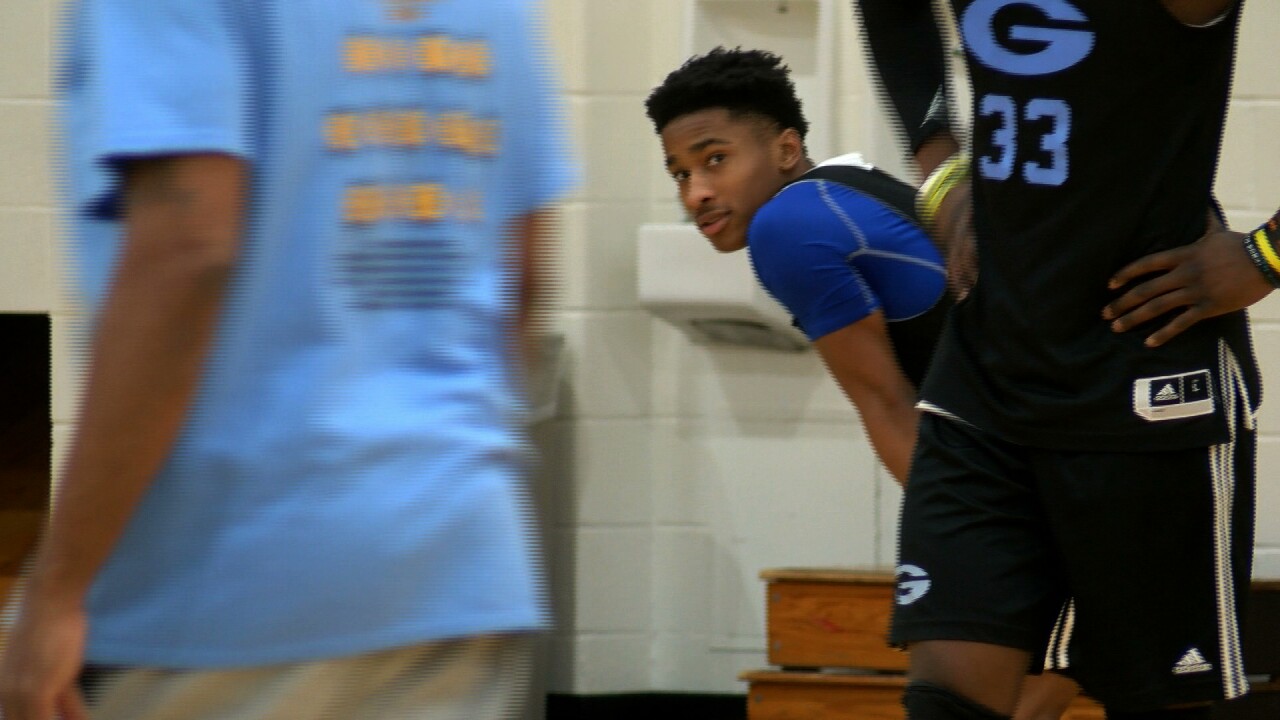 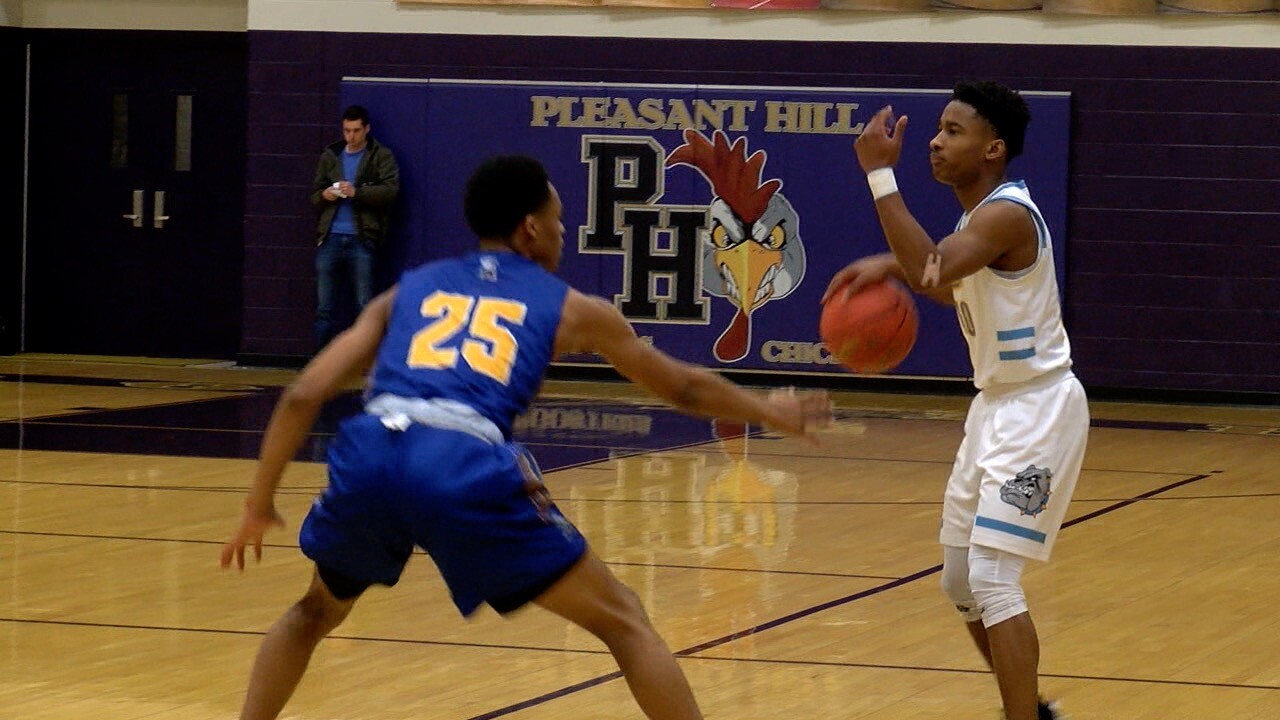 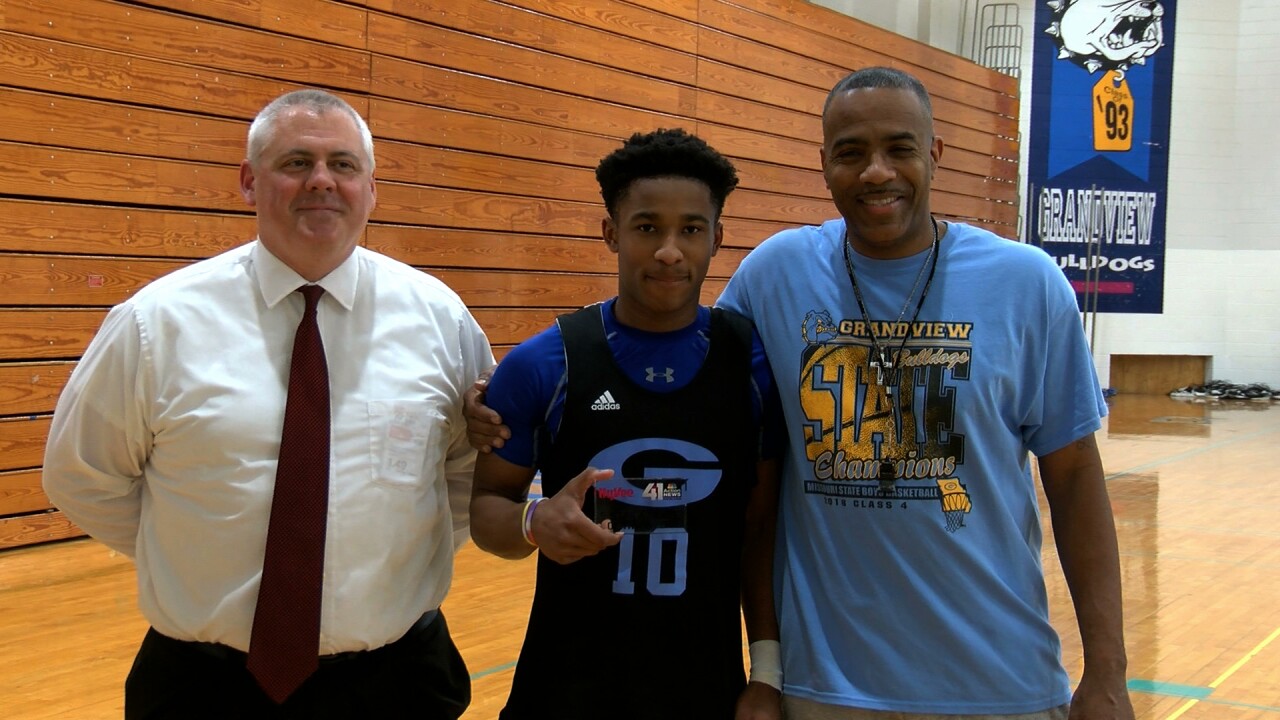 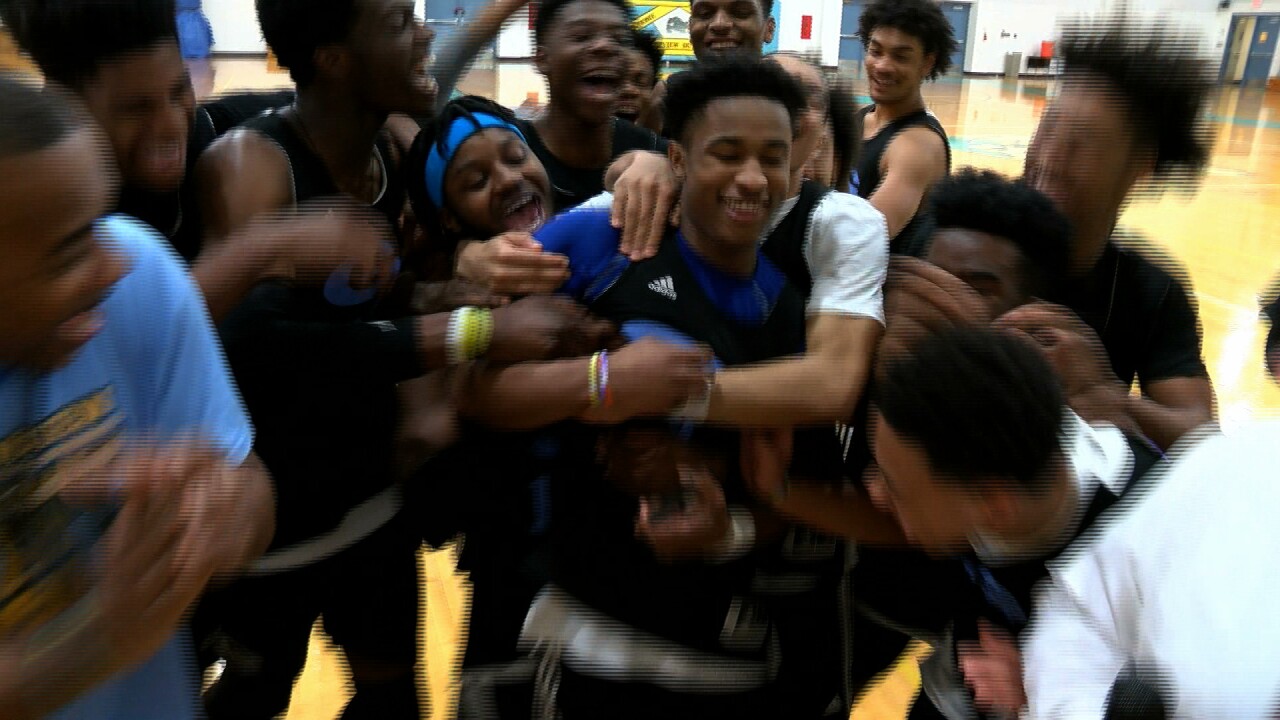 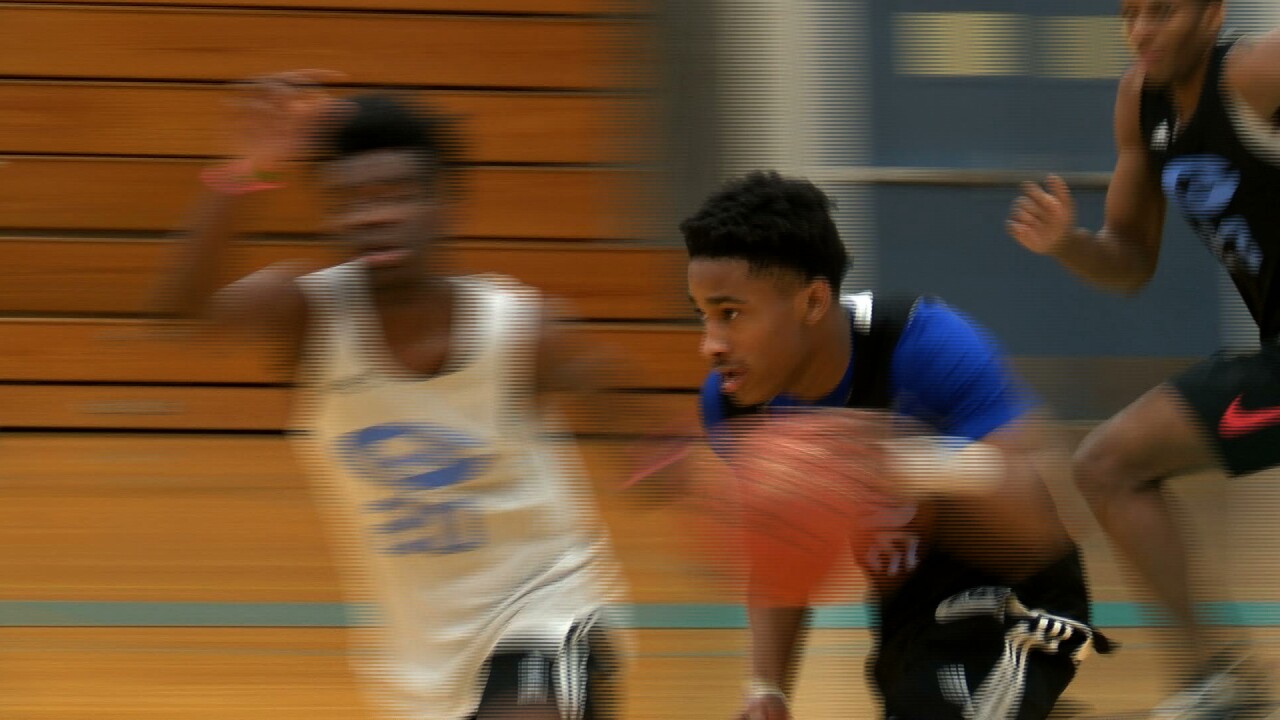 GRANDVIEW, Mo. — Grandview's DeAndre Sorrells was a security blanket for head coach Reggie Morris during much of the regular season.

Sorrells' contribution and leadership on the floor helped the Bulldogs win back-to-back state championships over the weekend. He scored a team-high 26 points in Grandview's 69-64 win over St. Mary's in the Missouri Class 4 Championship game in Springfield on Saturday.

The victory capped off 20 straight wins for the Bulldogs, who finished their season with a record of 29-2.

"Oh, it feels great," Sorrells said of being named the Hy-Vee 41 Five-Star Athlete of the Week. "It caught me by surprise because I didn't know it was coming. But, it just shows how much work I've put into this game every day. And for my teammates, my coaches, my family, they all helped. And they all just tell me to stay motivated and just keep working hard."

Sorrells was actually presented the Athlete of the Week award on March 11 after his 19-point performance in the team's 69-61 win over Southeast in the Missouri Class 4 state quarterfinals. Morris was certainly pleased with his performance.

"We were able to get some easy baskets in the post [against Southeast]," Morris said. "DeAndre hit some big shots for us too in transition. And [we] just got stops when we needed to."

Sorrells watched former Grandview standout Jordan Lathon lead the team to the school's first-ever state championship in 2018. Lathon now plays collegiate basketball at Division 1 Texas-El Paso. However, Sorrells took over as the team's leader and moved to point guard in the process.

He also recently scored his 1,000th career point and is the school's all-time leader in three-point baskets. It's that type of dedication that has allowed Sorrells to blossom into one of the best players in the Kansas City metro.

"It means that he's learned a lot," Morris said. "He had a great guy in front of him [in Lathon] last year that kind of, you know, ran the show for us. And he knew he had some shoes to fill. And he's fulfilled [that task] tremendously through his leadership, through his ability to run the point guard [position] after having not run the point guard [position] after four years.

"So, just getting the ball back into his hands, being the true all-around basketball player that he's been capable of because primarily, he's been known just as a shooter. But he's an all-around player. [His] on-the-ball defense has improved tremendously. [His] leadership and for us to be back in Springfield [winning a title], a lot of the credit goes to him," the coach said.

Sorrells was certainly happy to finish his high school career with a championship. He said that was the ultimate goal for him and the entire team.

"It's been very special," Sorrells said. "From the start, before the season started, I always told myself and the other seniors, 'We gotta go out with a bang.'"

Here are some additional notes about DeAndre Sorrells: