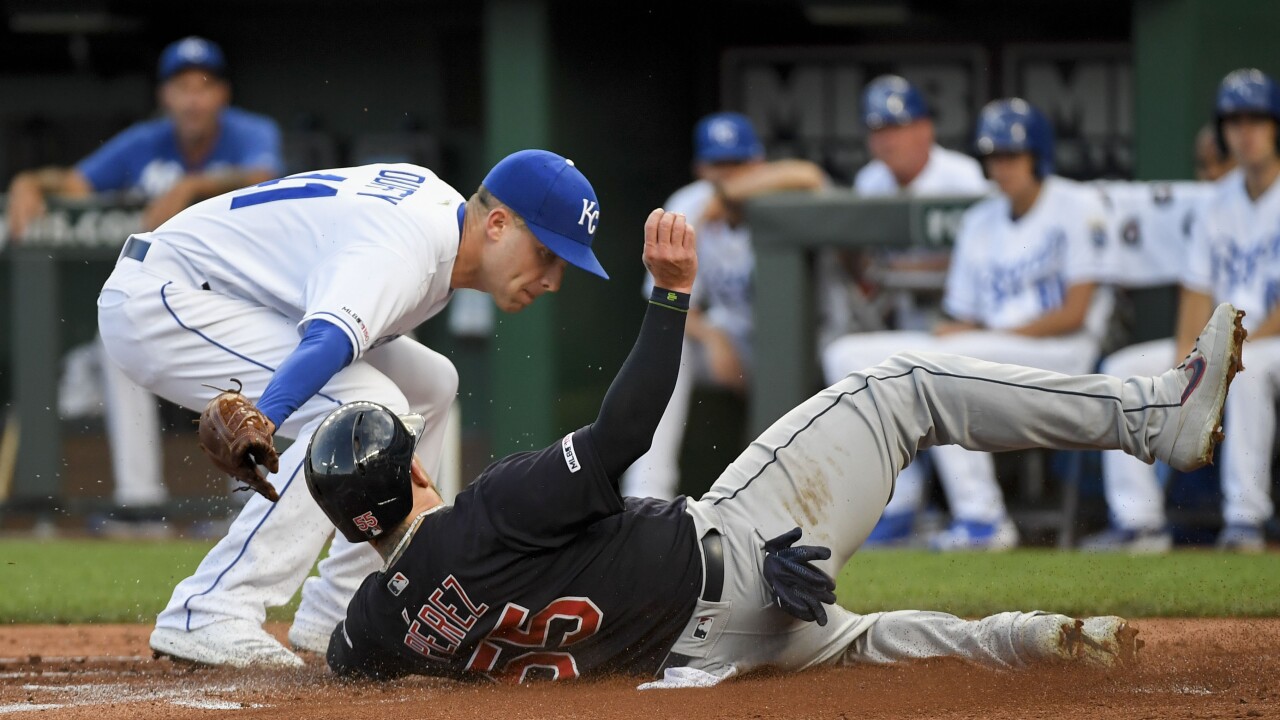 Clevinger (2-2) struck out nine without a walk in his second start since a balky back forced him into a lengthy stay on the injured list. He struggled in his first game back but dominated the Royals on a picture-perfect night, improving to 7-0 with a 2.03 ERA in his career against them.

Both starters had stumbled into the game, and the teams had combined for 25 hits in the series opener. So of course that rarest of treats these days would unfold: an old-school pitchers' duel.

Duffy retired the first six batters he faced, then kept grinding outs when he couldn't seem to find the plate. And he did it despite two defensive miscues that cost him a run in the third.

The first came when Perez appeared to be caught stretching a double into a triple, but Hunter Dozier's high tag allowed him to sip underneath safely. The second flub came when Perez should have been caught trying to score on a wild pitch but again the tag was missed.

There was no one to blame but Duffy for Santana's homer in the fourth.

The veteran first baseman cranked a 1-2 pitch into the bullpen in left field to extend his Major League-leading on-base streak to 26 games. It was also the 193rd home run for Santana with the Indians, breaking a tie with Al Rosen for the ninth-most in club history.

Duffy was finally lifted after loading the bases with two outs in the seventh inning, but Kevin McCarthy got Santana to ground into an easy putout to keep the Royals in the game.

He left trailing 2-0, thought that's hardly new. Only once in the eight starts since Duffy's last win May 19 have the Royals scored more than two runs while he was in the game.

Meanwhile, two runs were plenty for Cleveland with Clevinger and Co. on the mound.

The right-hander with the funky delivery worked around singles in the first and second, then watched his defense cut down Alex Gordon stretching a single in the fourth. The other hit Clevinger allowed came in the sixth, and he responded with a pair of punch-outs to end the frame.

The Indians' bullpen took care of the rest.

The Royals signed 16-year-old outfielders Erick Pena and Roger Leyton, one day after Major League Baseball's international signing period began. Pena, a native of the Dominican Republic, was considered among the five best prospects on the international market. Leyton is from Nicaragua.

The Indians acquired utility man Andrew Velazquez from Tampa Bay for international pool money and assigned him to the Triple-A Columbus injured list, where he will rehab left thumb and right hamstring injuries. In a corresponding move, right-hander Chih-Wei Hu was designated for assignment.

The Royals send Homer Bailey (7-6, 4.87 ERA) to the mound and the Indians counter with fellow right-hander Zach Plesac (3-3, 3.61) as the clubs wrap their three-game set with a Thursday matinee.