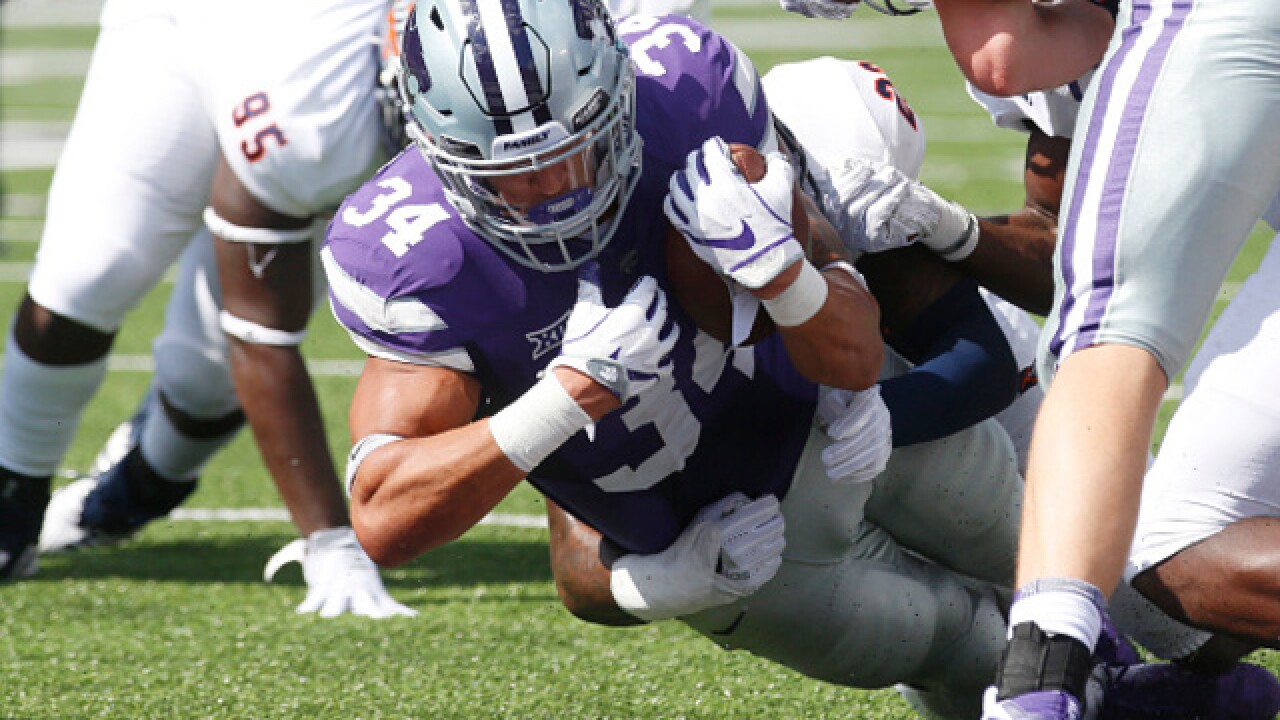 Copyright 2018 Scripps Media, Inc. All rights reserved. This material may not be published, broadcast, rewritten, or redistributed.
Wichita Eagle
Kansas State running back Alex Barnes (34) scores a touchdown in the first quarter on a short run against UTSA at Snyder Family Stadium in Manhattan, Kan., on Saturday, Sept. 15, 2018. (Bo Rader/Wichita Eagle/TNS via Getty Images) 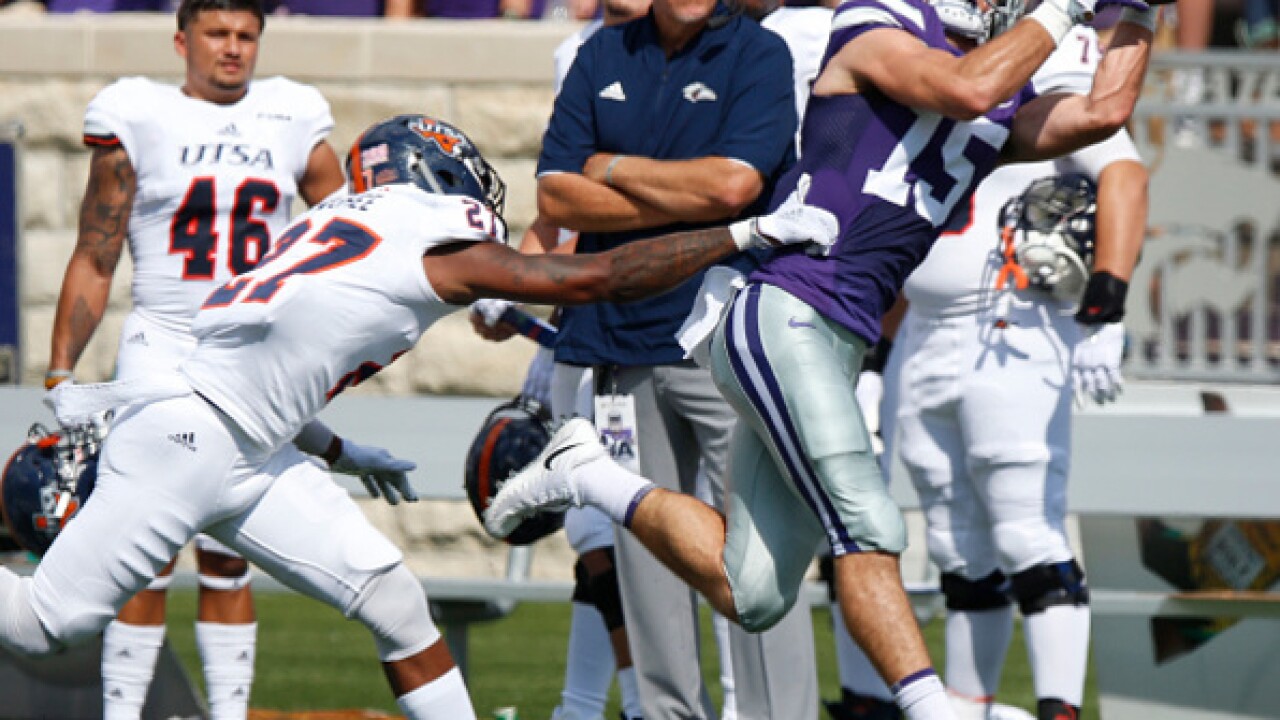 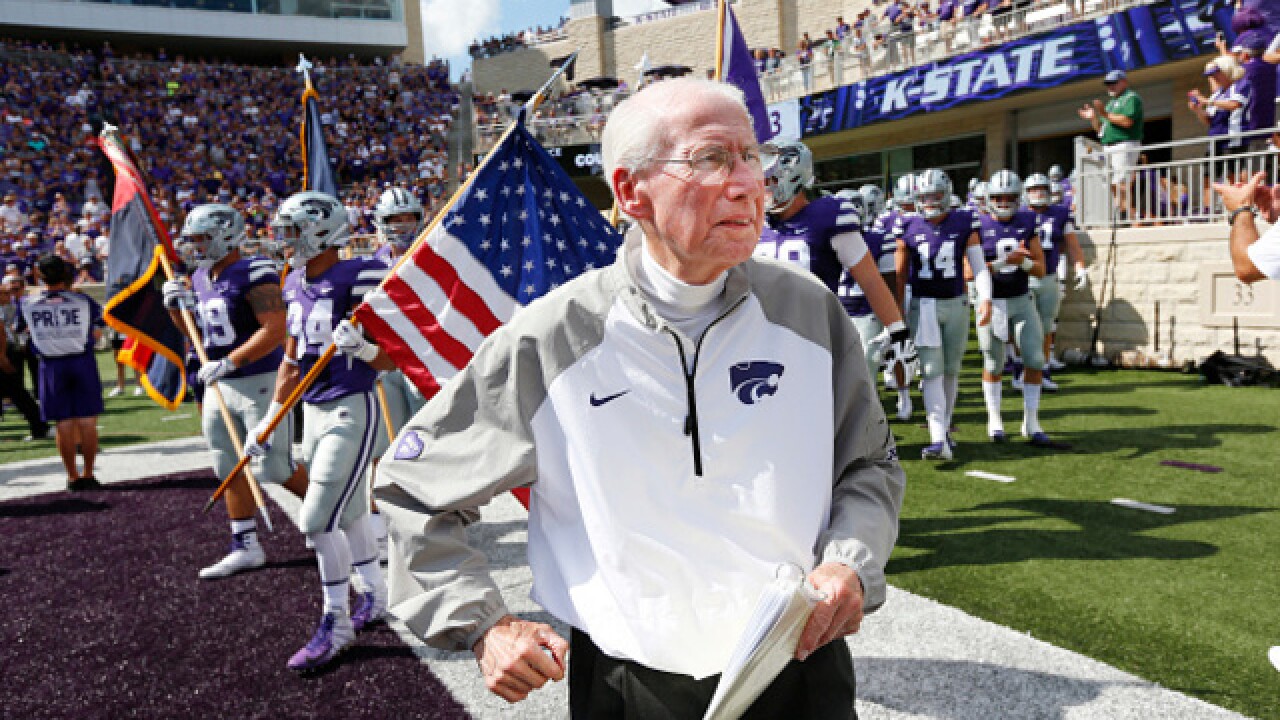 MANHATTAN, Kansas (AP) — Skylar Thompson threw for two scores and ran for another and Kansas State ran away from UTSA 41-17 on Saturday.

Thompson, who had been in a much-discussed quarterback battle with Alex Delton through the spring and early part of fall camps, stood out with some stellar play and might have sealed up the starting job. Thompson was tough to tame through the air and on the ground.

The Kansas State (2-1) signal caller threw for 213 yards on 13-of-18 passing and connected on long aerial bombs to Dalton Schoen and Isaiah Zuber. Thompson also was lethal on the ground with 66 yards rushing highlighted by a 27-yard scamper for a touchdown midway through the third quarter.

The Wildcat defense held the UTSA (0-3) offense at bay for most of the afternoon and limited quarterback Cordale Grundy to 108 yards passing.

UTSA: The loss drops UTSA to 0-3 on the season and yet another game where the defense gave huge chunks of yardage. This time, the Roadrunners gave up more than 400 yards to a Kansas State offense that entered the game struggling to gain offensive consistency.

Kansas State: Despite the 72-yard TD pass from Alex Delton in the second half, Skylar Thompson more than likely ended the much-debated topic of who will be the Jayhawks' starting quarterback. From the first series of the game, the Wildcats were much more efficient and balanced than they had been in their first two matchups of the season.

STAT OF THE DAY: It took the Wildcats three games, but they finally scored their first rushing touchdown of the season after running back Alex Barnes rushed in from 3-yards out to give Kansas State its first score.