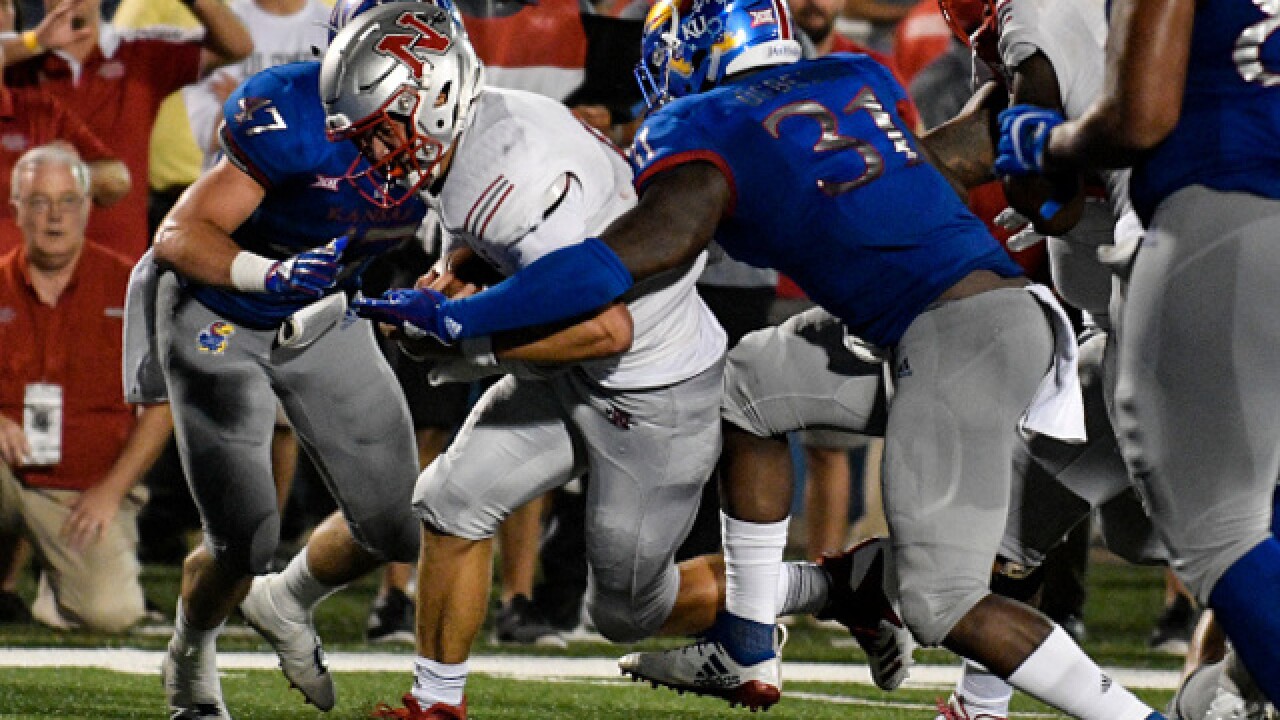 Copyright 2018 Scripps Media, Inc. All rights reserved. This material may not be published, broadcast, rewritten, or redistributed.
Ed Zurga
<p>LAWRENCE, KS - SEPTEMBER 1: Quarterback Chase Fourcade #9 of the Nicholls State Colonels goes into the end zone for a touchdown against linebacker Keith Loneker Jr. #47 and linebacker Osaze Ogbebor #31 of the Kansas Jayhawks in overtime at Memorial Stadium on September 1, 2018 in Lawrence, Kansas. Nicholls State won 26-23. (Photo by Ed Zurga/Getty Images)</p>

LAWRENCE, Kan. --  Chase Fourcade ran in a 4-yard touchdown in overtime and Nicholls upset Kansas 26-23 on Saturday night in the season opener for both teams.

When the Colonels' Damion Jeanpiere's muffed punt return led to the Jayhawks taking the lead late in the fourth quarter, it seemed as though their resilient upset attempt could go to waste. But Nicholls then marched down the field to tie the game with under a minute left and outplayed Kansas in overtime to secure the road victory.

"Big win for the football program, for the school, for the whole community," Nicholls coach Tim Rebowe said. "I told the guys, I'm always proud of them, but I've never been more proud of them than tonight, how they came in and fought. It's a group of guys who believe."

Nicholls came into an optimism-filled David Booth Kansas Memorial Stadium and spoiled Kansas' home opener in a game few expected them to win. The Colonels, of course, belong to that few.

"None of our players thought, `Well, since we're playing an FBS team, we don't have a chance to win," Fourcade said. "I feel like everybody on this team, we've always got that confidence and that mentality that we can win every game."

After holding the Jayhawks to a field goal in overtime, Fourcade answered with a five-play touchdown drive aided by a pass interference call. He finished with just 142 yards passing and no scores in the air but rushed for 51 yards and the late touchdown.

Kendall Bussey added 123 yards rushing and a touchdown out of the backfield, and Dontrel Taylor punched in a score as well.

The Colonels got the ball rolling early, marching down the field for a nine-play, 78-yard touchdown drive on their first possession. Kansas' defense buckled down for the rest of the first half with the only other score coming after a 55-yard completion by Fourcade to Jeanpiere to set up a 28-yard field goal from Lorran Fonseca.

It was a struggle for Nicholls to string together much in the beginning of the second half, but it finally broke through when Bussey burst through the line to find nothing but green in front of him en route to a 40-yard touchdown run.

Kansas' offense had some success early as Peyton Bender found Steven Sims for a touchdown on the second drive to cap an efficient effort that included two nice runs for first downs. But then Sims dropped an easy score in the end zone next time out, and Kansas had to settle for a field goal.

Bender finished 19-of-35 passing for 187 yards and two touchdowns. Miles Kendrick also saw some time under center, leading one series that resulted in a punt early in the second quarter.

Kansas falls to an FCS school in what was expected to be its least-challenging game of the season -- not a good start to a make-or-break season for coach David Beaty.

Nicholls grabs a statement victory over the Big 12-trained Kansas, a promising sign for what looks to be a promising season.

Kansas travels to Central Michigan on Saturday for its only non-conference road game. The Jayhawks haven't won a game on the road since Sept. 9, 2009.

Nicholls heads to nearby Tulane for another road test on Saturday.