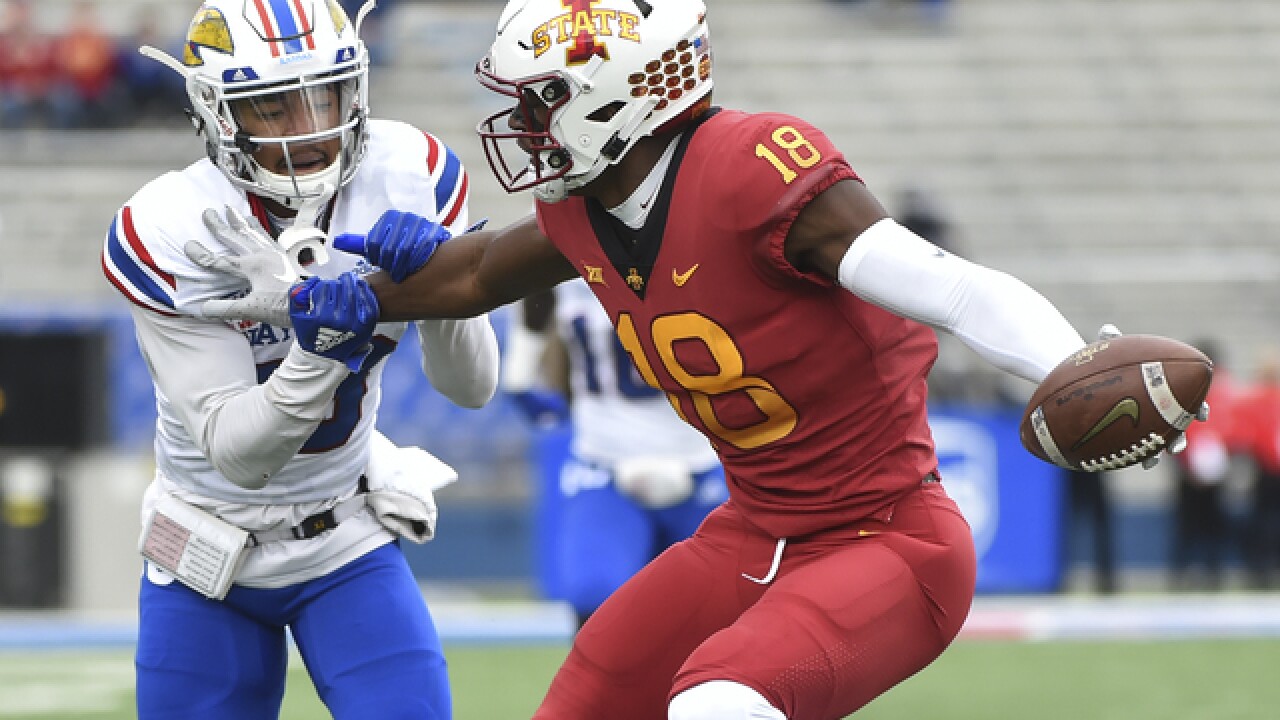 Copyright 2018 Scripps Media, Inc. All rights reserved. This material may not be published, broadcast, rewritten, or redistributed.
Ed Zurga
<p>LAWRENCE, KS - NOVERMBER 3: Wide receiver Hakeem Butler #18 of the Iowa State Cyclones slips past cornerback Hasan Defense #13 of the Kansas Jayhawks as goes for a 51-yard touchdown pass in the first quarter at Memorial Stadium on November 3, 2018 in Lawrence, Kansas. (Photo by Ed Zurga/Getty Images)</p>

They make sure to put points on the board when they venture inside the 20-yard line, and they have the ability to turn teams back when their defense has its back against the wall.

That proved to be the case Saturday.

Brock Purdy threw a short touchdown pass to cap a three-TD performance, and the Cyclones kept stopping Kansas on fourth down on the doorstep of the end zone, allowing them to cruise to a 27-3 win -- their fourth straight since installing their freshman quarterback under center.

"There's a lot of confidence down there," Campbell said of the red zone. "We don't have a ton of five-star players so our margin for error is very small."

The margin of victory Saturday was plenty big.

Purdy finished with 263 yards passing in another stellar performance, and his other two TD tosses were big-play strikes to Hakeem Butler. David Montgomery ran for 67 yards and Purdy added 53 more on the ground as the Cyclones (5-3, 4-2) kept alive their hopes of playing in the Big 12 title game.

The Jayhawks' Peyton Bender was just 19 of 40 for 185 yards, though he had several passes dropped, including one for a certain TD by Stephon Robinson early in the game. Khalil Herbert added 91 yards on the ground in what amounted to the only bright spot for coach David Beaty's team.

Now, the calls for his job are sure to grow louder.

The Jayhawks (3-6, 1-5) upset TCU last week to give Beaty a week's reprieve, but his team looked woefully unprepared Saturday. Substitution mistakes, four failed fourth downs and a myriad other issues made for an ugly showing in front of a sparse crowd made up of about 50 percent Iowa State fans.

At least Purdy and Butler gave those wearing red a chance to cheer.

After forcing an early three-and-out, the Cyclones needed three plays for their young quarterback to hit his tall, lanky wide receiver deep downfield. Butler was so far behind the coverage on their 83-yard TD strike that the Jayhawks gave up and jogged behind him to the end zone.

Then, after another three-and-out, the Cyclones needed only two plays for Purdy to hit his big-play target downfield. Butler leaped over Hasan Defense to snare the jump ball, then turned and coasted 51 yards for another touchdown and a 14-0 lead.

The Cyclones tacked on a pair of field goals as they built a 20-3 halftime lead.

"Coach had a great gameplan, he had us in position to make many plays, and we ain't do it," Defense said. "So we shouldn't have been down to where we felt we had to bounce back."

Purdy added his third touchdown toss when he found Matthew Eaton open early in the third quarter to make it 27-3, and Iowa State merely coasted the rest of the way.

"We had plenty of opportunities. We weren't able to make those opportunities count when we needed them," Beaty said. "They just kind of have progressed a little bit faster than we have offensively. We got to be better than what we were."

For its "Salute to Service" weekend, the Jayhawks honored Kansas alumni and Marine Corps veterans Rob Riggle and Billy Mills during the game. Riggle has gone on to a successful acting career while Mills won gold at the 1964 Summer Olympics in the 10,000 meters before becoming a humanitarian.

Iowa State: Purdy has gained confidence with each start, and it showed in the way he toyed with the Jayhawks' defense. He deftly picked apart a bunch that played well a week ago against the Horned Frogs, and his ability to extend plays with his legs make the Cyclones a challenge to stop.

Kansas: New athletic director Jeff Long will no doubt take a close look at Beaty's future with the program. The fact that the Jayhawks appeared uninspired and unprepared was bad enough, but the ocean of empty seats at Memorial Stadium each Saturday has become too difficult to ignore.

Iowa State tries to become bowl-eligible against Baylor next Saturday.

Kansas heads down Interstate 70 to face Kansas State next Saturday.