Kansas ordered to turn over materials about Adidas, recruit 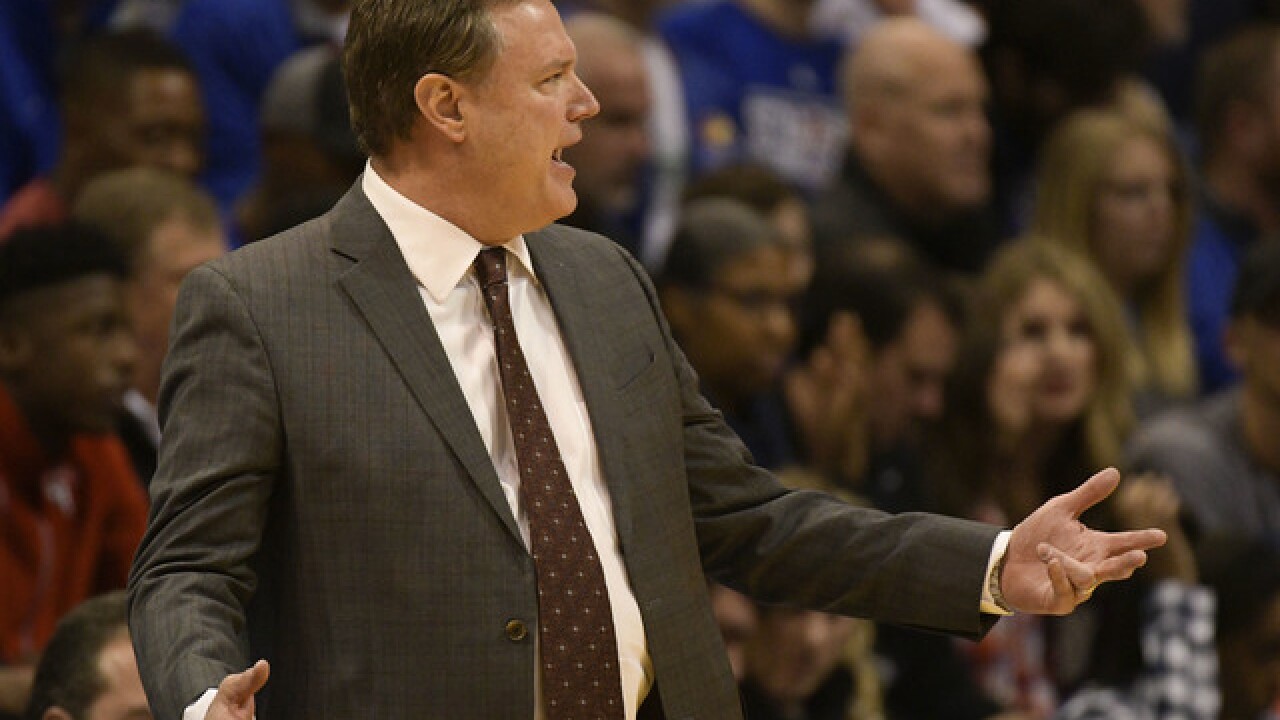 Copyright Getty Images
Reed Hoffmann
<p>LAWRENCE, KS - DECEMBER 18: Head coach Bill Self of the Kansas Jayhawks tales to a referee during the first half of their game against the Nebraska-Omaha Mavericks on December 18, 2017 at Allen Field House in Lawrence, Kansas. (Photo by Reed Hoffmann/Getty Images)</p>

The federal grand jury in New York also demanded copies of any agreements with apparel manufacturer Adidas and communications between the basketball coaches and company representatives.

"These documents do not suggest any wrongdoing by the university," spokesman Andy Hyland said in an email Wednesday to The Associated Press, referring to the two subpoenas, which were sent in January and March. "We are cooperating fully with investigators in this matter."

The university released edited copies of the subpoenas Tuesday. Each demands documents and communications regarding "the recruitment and enrollment" of a person whose name is blacked out, so that it is not clear whether both subpoenas refer to a single person or different people, or whether they involved someone who ultimately enrolled at Kansas.

The subpoenas were part of a multi-year investigation into the alleged payment of hundreds of thousands of dollars in bribes and kickbacks designed to influence recruits in choosing a school, agent or apparel company.

Multiple schools are enmeshed in the investigation, including Kansas, Louisville, North Carolina State and Maryland, which earlier this month released copies of subpoenas it received. The fallout has included the ouster of Louisville's Hall of Fame head coach Rick Pitino, who was not charged criminally.

"Because this is an active investigation, it is not appropriate for us to comment further at this time," Hyland said in his email.

The first subpoena to Kansas was issued Jan. 8 and demanded the production of records by Jan. 22. It sought documents, including emails and texts, from Jan. 1, 2016, going forward.

It included documents and communications between men's basketball coaching staff or any other athletic department member regarding the recruitment or enrollment of the unnamed person, family or representatives.

It also demanded all "application and/or enrollment forms, financial aid forms, eligibility forms including any NCAA student athlete statements, and/or any national letter of intent" submitted by or on behalf of the unnamed person "whether completed or in draft form."

The same subpoena also demanded contracts and other agreements between Kansas and Adidas effective after the start of 2016 and any communications between the athletic department and men's basketball coaches with current or former Adidas employees.

The second subpoena to Kansas was issued March 14 and demanded the production of documents by March 23. It covered only documents regarding the recruitment and enrollment of an unnamed person.