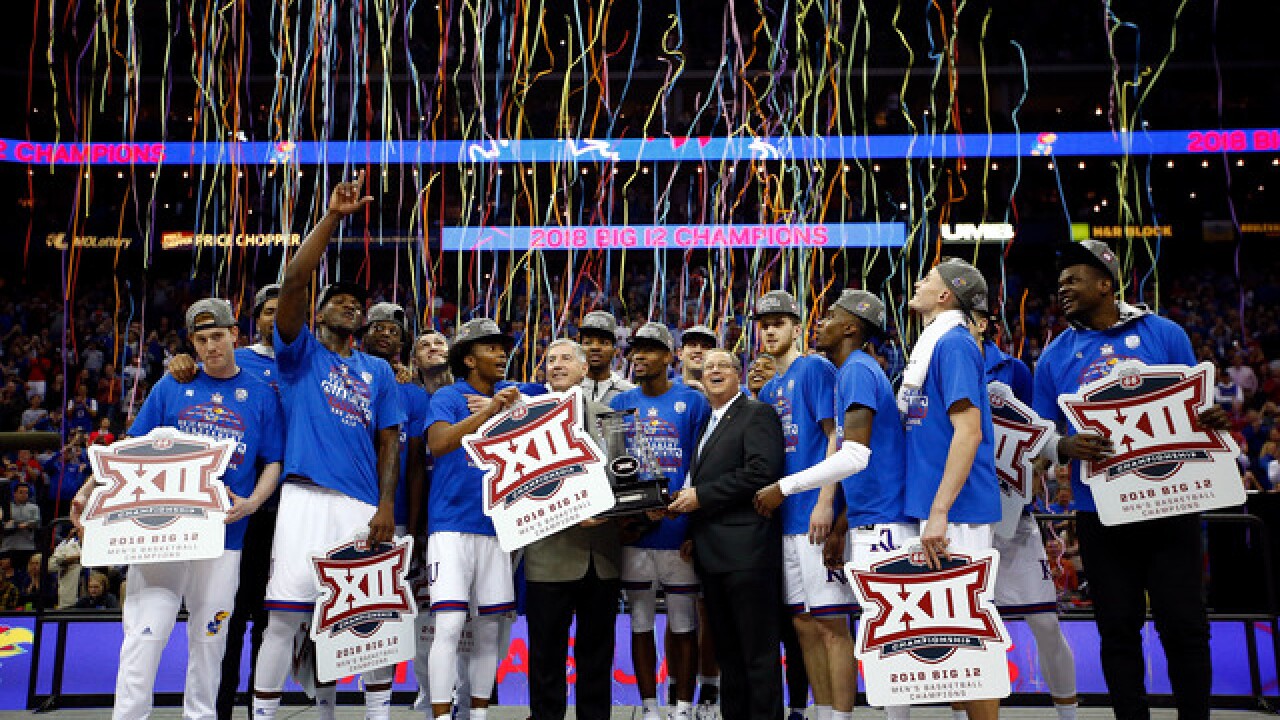 KANSAS CITY, Mo. (AP) - Devonte Graham ripped off the shooting sleeve he was wearing and tossed it into the crowd, then took the two-time Big 12 defensive player of the year baseline for a pullup jumper.

Talk about unflappable. Unstoppable, too.

The league's player of the year finished with 18 points and 13 assists, most of them during the decisive second half, and Graham led ninth-ranked Kansas to an 81-70 victory over Jevon Carter and No. 18 West Virginia in the Big 12 Tournament championship game Saturday night.

Malik Newman added 20 points on his way to tournament MVP, and freshman Silvio De Sousa had 16 points on 8-for-8 shooting in place of injured big man Udoka Azubuike, lifting the Jayhawks (27-7) to their 11th tournament title and a likely No. 1 seed in the NCAA Tournament.

It was the second time in three years they've beaten West Virginia (24-10) for the championship.

"We just locked on and starting plays and kept competing, and it was just fun. It was fun to be out there," Graham said with a smile. "It helped that we were able to make shots."

Modest understatement there. The Jayhawks shot 72 percent from the field in the second half, and 56 percent for the game, while going 15 of 27 from beyond the 3-point arc.

"They have a lot of guys who can make shots," West Virginia coach Bob Huggins said. "Let's be honest, all of those guys out there, if they're not McDonald's All-Americans it's because they're from another country. They have good players and their guy can coach, you know?"

Daxter Miles Jr. hit five 3s and had 25 points to lead West Virginia, which has lost the last three Big 12 title games. Sagaba Konate added 18 points while Carter, the best defender in the league, finished with 17 points and nine assists.

West Virginia still has not won a postseason league tournament since the Big East in 2010.

"They just did a real good job of knocking down shots," Carter said. "Seemed like every shot they put up, it went in. When we went cold, they kept hitting."

The Mountaineers controlled most of the first half, picking and choosing when to employ their full-court press. And they caught a break when Mykhailiuk and Mitch Lightfoot picked up two fouls apiece, allowing Konate to score nearly at will in the paint.

Then the Mountaineers' big fella picked up his second foul and took a seat on the bench.

The Jayhawks roared back to briefly tie the game, and trailed 34-33 at the break after De Sousa threw down an alley-oop dunk in transition in the closing seconds of the first half.

One of the hallmarks of Kansas over the years, especially under Bill Self, has been tenacious half-court defense -- and the Mountaineers shredded it early in the second half. They scored their first eight possessions, and Miles' layup gave them their biggest lead at 51-43 with 15:08 left.

From there, the game turned into a back-and-forth prizefight: Kansas scored 10 straight, West Virginia answered with eight in a row and the Jayhawks responded with 10 more.

"They got control of the game. We made a run. They got control in the second half, we made a run," Self said, "and that was the difference. When they had a chance to distance themselves we got back in it, and we played almost flawless down the stretch."

The Jayhawks' last run was part of a larger 17-3 charge to finally take control.

Graham capped it with his fadeaway baseline jumper over Carter -- after shedding a bit of clothes -- and a 3-pointer from the wing that made it 73-66 with 3:49 to go.

West Virginia got it to 76-70 on Carter's two free throws moments later, but Miles missed a 3-pointer and Carter missed a circus-style layup, then turned the ball over with a minute left.

That allowed the Jayhawks to seal their latest Big 12 championship from the foul line.

"We had open shots, didn't make them. They had contested shots, made them," Huggins said. "If they can do that for three weeks, they could win a national championship."

Azubuike will be evaluated again Sunday, and Self expressed hope that he would be ready for the Jayhawks' NCAA Tournament opener. The 7-foot sophomore hurt a ligament in his left knee during practice Tuesday, but he appeared to be moving well with a brace on before the game.