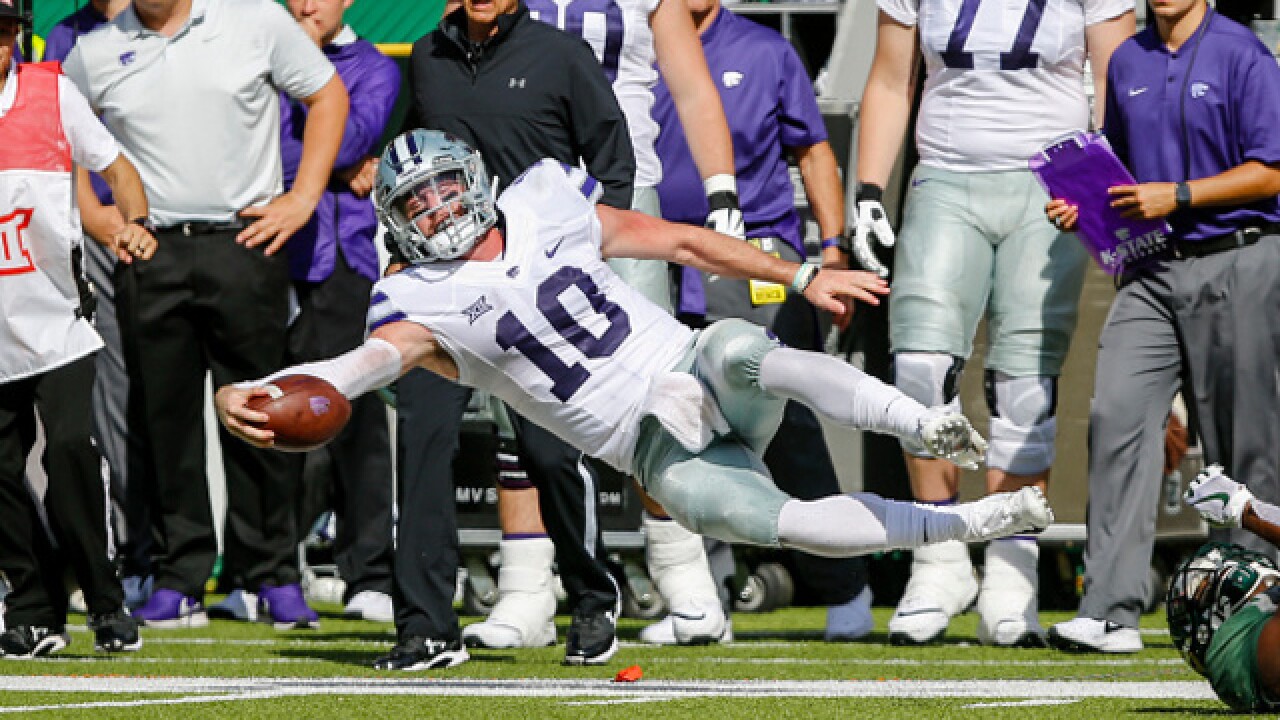 Copyright 2018 Scripps Media, Inc. All rights reserved. This material may not be published, broadcast, rewritten, or redistributed.
Icon Sportswire
<p>WACO, TX - OCTOBER 06: Kansas State Wildcats quarterback Skylar Thompson (10) stretches for a first down during the game between the Baylor Bears and the Kansas State Wildcats on October 6, 2018 at McLane Stadium in Waco, Texas. (Photo by Matthew Pearce/Icon Sportswire via Getty Images)</p>

MANHATTAN, Kan. (AP) -- Skylar Thompson accounted for two touchdowns and sparked a late game-winning drive as Kansas State beat TCU 24-17 on Saturday for the Wildcats first win in over a month.

With eight minutes to play and the game tied 17-17, Thompson had a 61-yard run during an 11-play, 95-yard drive, capped by his 3-yard touchdown run with 2:45 to play. TCU drove to the Kansas State 37 on the ensuing series, but couldn't convert on fourth-and-11.

Thompson threw for 172 yards, including a 21-yard touchdown pass to Nick Lenners in the first quarter.

The Wildcats (4-2, 1-2 Big 12) finished with only 266 yards of offense and was stifled most of the game. One of their scores came off a blocked punt in the first quarter.

Max Duggan ran for 115 yards and a touchdown and added 132 yards passing for TCU (3-3, 1-2 Big 12), which lost their second straight conference game. Duggan had only 46 career yards rushing coming into the contest. Duggan's 46-yard touchdown run tied the game at 17-17 midway through the third quarter.

Sewo Olonilua and Darius Anderson each added 56 yards rushing for the Horned Frogs.

This was a game that felt like TCU should've won. They have lost two straight and will be in for a tough matchup next week against No. 15 Texas.

Kansas State scratched and clawed for their first win since beating Mississippi State on Sept. 14. They will need to carry this momentum into next week when they face fifth-ranked Oklahoma.