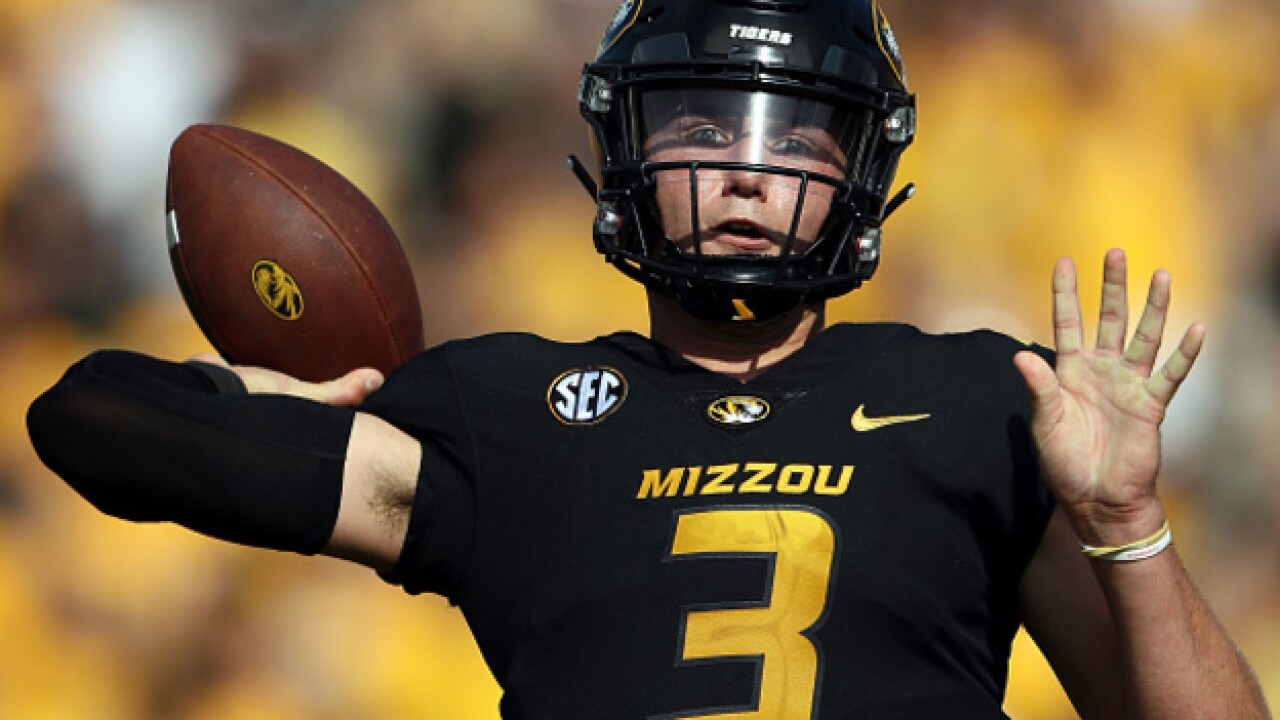 Copyright 2018 Scripps Media, Inc. All rights reserved. This material may not be published, broadcast, rewritten, or redistributed.
Jamie Squire
<p>COLUMBIA, MO - SEPTEMBER 01: Quarterback Drew Lock #3 of the Missouri Tigers passes during the game against the Tennessee Martin Skyhawks at Faurot Field/Memorial Stadium on September 1, 2018 in Columbia, Missouri. (Photo by Jamie Squire/Getty Images)</p>

Lock, who set a Southeastern Conference record with 44 touchdown passes last year, completed 19 of 25 passes for 289 yards and four TDs against the Skyhawks. It was his first game with new offensive coordinator Derek Dooley, the third coordinator in Lock's four-year career.

"The efficiency of our offense today was awesome to see," Lock said. "It was a different feel. I enjoyed it, I think everybody on the offense enjoyed it and I definitely know the defense enjoyed getting a little break on the sideline once in a while."

The Tigers slowed their tempo a bit from the frantic pace they used under Dooley's predecessor, Josh Heupel, and deployed more double-tight end formations. Lock continued last year's trend of throwing it deep to Emanuel Hall, who finished with four catches for 171 yards and two touchdowns.

A bright spot for the Skyhawks, an FCS program, was the play of their run defense. They held Missouri to 3.7 yards per carry. Linebacker James Gilleylen had three tackles for loss. But that commitment to stopping the run came at a price.

"We're not a man coverage team, but you saw us have to play it to get enough in the box in order to stop the run, and then the ball's 60 yards down the field and they run past us," UT Martin coach Jason Simpson said. "We're not the only ones they do that to. They've done it for the last couple of years."

The Skyhawks managed 277 total yards. Jamiee Bowe scored on a 1-yard run with 9:34 left in the second quarter. In the third quarter, LaDarius Galloway slipped out the backfield unnoticed and caught a 51-yard touchdown pass from Dresser Winn. Winn completed 15 of 24 passes for 168 yards.

Missouri led 38-7 at halftime. Lock exited the game after the first series of the third quarter. He left on a high note. His final attempt was a 70-yard touchdown pass to Kam Scott.

"The cleanliness of the game for us — no turnovers, minimal penalties — that's the way I wanted to start," Missouri coach Barry Odom said. "The kids did a good job of buying into that."

Missouri: Two true freshman wide receivers made big plays that suggested they might be significant contributors this season. On Lock's final pass, Scott made a leaping catch and stepped out of a tackle on his way to the end zone. Jalen Knox outjumped a defender and hauled in a 38-yard pass from backup QB Taylor Powell in the third quarter.

UT Martin: The Skyhawks dropped to 1-25 all-time against FBS opponents, but their coach said the players remain eager to play against the best competition.

"Every one of them would still line up and do it again," Simpson said. "That's the largest group, biggest crowd they're going to play against this year."

Missouri: The Tigers will play host to Wyoming.