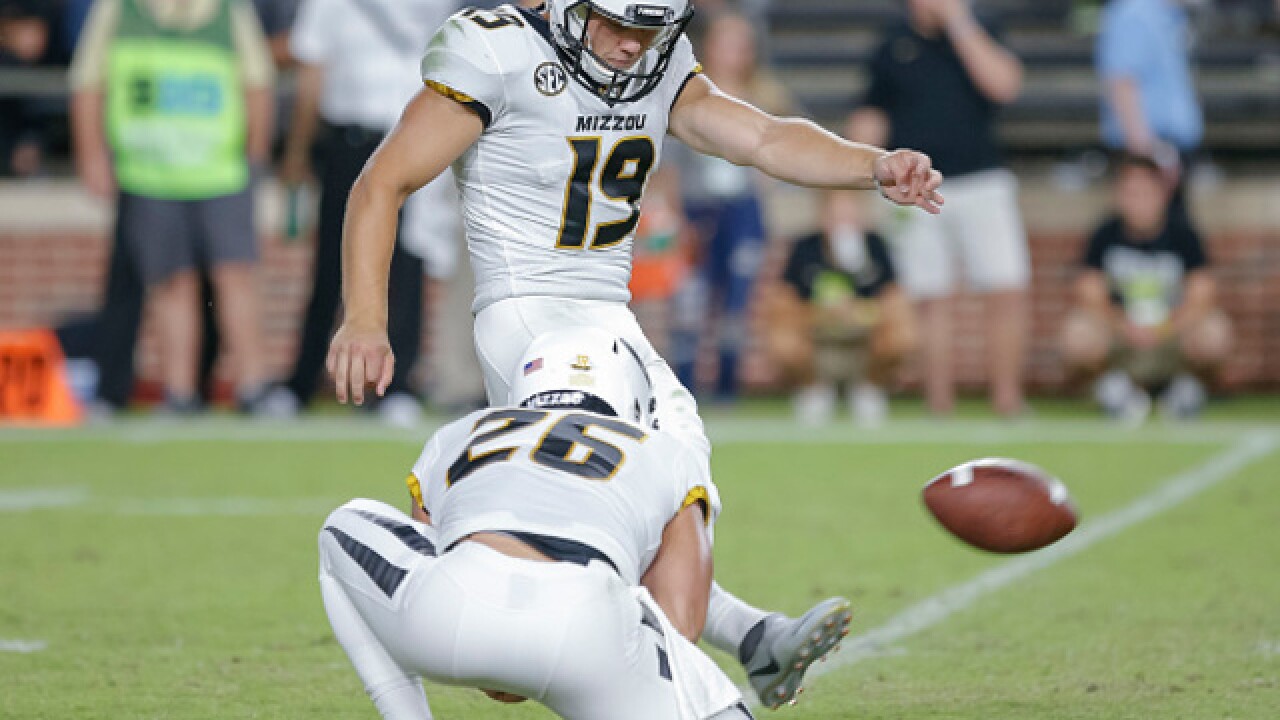 Copyright 2018 Scripps Media, Inc. All rights reserved. This material may not be published, broadcast, rewritten, or redistributed.
Michael Hickey
WEST LAFAYETTE, IN - SEPTEMBER 15: Tucker McCann #19 of the Missouri Tigers kicks the game winning field goal against the Purdue Boilermakers at Ross-Ade Stadium on September 15, 2018 in West Lafayette, Indiana. (Photo by Michael Hickey/Getty Images) 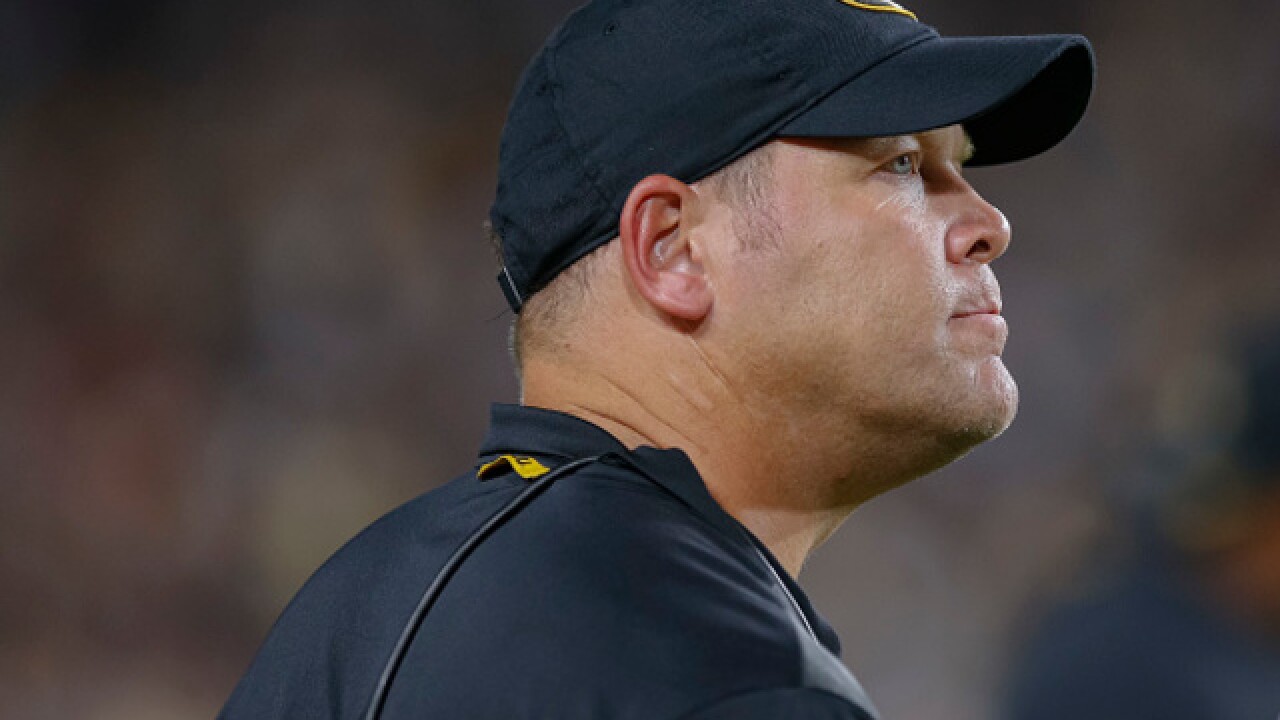 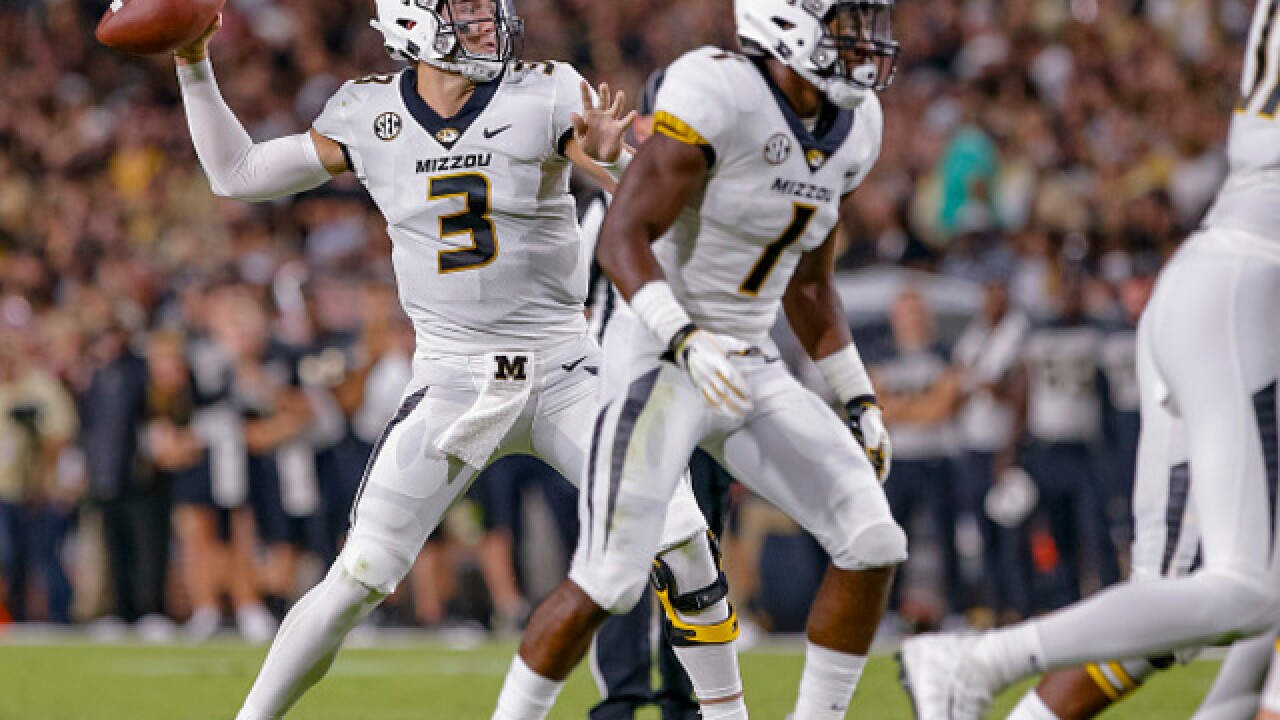 Missouri (3-0) is off to its best start since 2015 while Purdue (0-3) faces its worst beginning of the season since 1996 when they last opened with three losses.

The Tigers turned to McCann often to help stay ahead of the Boilermakers. McCann was 4 of 5 on field goals, including the game-winner from 25 yards.

Drew Lock finished 26-of-43 passing for 375 yards with three touchdowns and an interception for Missouri. He ran for negative-10 yards and a TD.

David Blough was 39-of-55 passing and had a career-high and program record 572 yards passing for the Boilermakers. He threw three touchdown passes and an interception, and ran for 18 yards on six carries with a touchdown.

The Boilermakers also relied on their kicker. Spencer Evans was 3 of 4 on field goals, including a 26-yarder with 3:28 remaining to tie the game at 37.

That came at the end of a thrilling and chaotic finish after the Boilermakers came back from 17 points down in the first half. They tied it 27-27 with Evans’ 29-yard field goal early in the third quarter.

“More than anything, (we) mentally stayed on track to line up and play the next snap,” Missouri coach Barry Odom said. “That’s something we’ve focused on over and over and over. No matter how good or bad the last snap is, refocus and let’s get on to the next one.”

Missouri built a 27-10 lead after scoring twice in the second quarter, both on touchdown passes from Lock, including one from 59 yards to Jalen Knox, and a 2-yard pass to Albert Okwuegbunam with 7:10 remaining in the half.

Blough completed passes of 34 and 14 yards before scoring from a yard out to make it 27-17 with 2:42 left in the second quarter. Then Jacob Thieneman blocked Missouri’s 50-yard field-goal attempt and Blough threw a 3-yard TD pass to Brycen Hopkins to cut Missouri’s lead to 27-24 at halftime.

“There was a time in the game you felt like the game was almost opened up in our favor and then Purdue made plays,” Odom said. “We just kept battling back. Obviously, it wasn’t pretty a lot of times but we found a way to win a game on the road when things didn’t always go our way.”

Missouri: The Tigers’ offense continues to be dominant. They finished with 608 yards on offense and extend their regular-season winning streak to nine games in which they have scored 40 or more points.

Purdue: The Boilermakers saw another game slip away. They’ve now lost on a last-second field goal for the second time in three games.

Missouri: The Tigers open SEC play against No. 3 Georgia on Saturday.

Purdue: The Boilermakers host Boston College on Saturday in the first meeting between the programs.