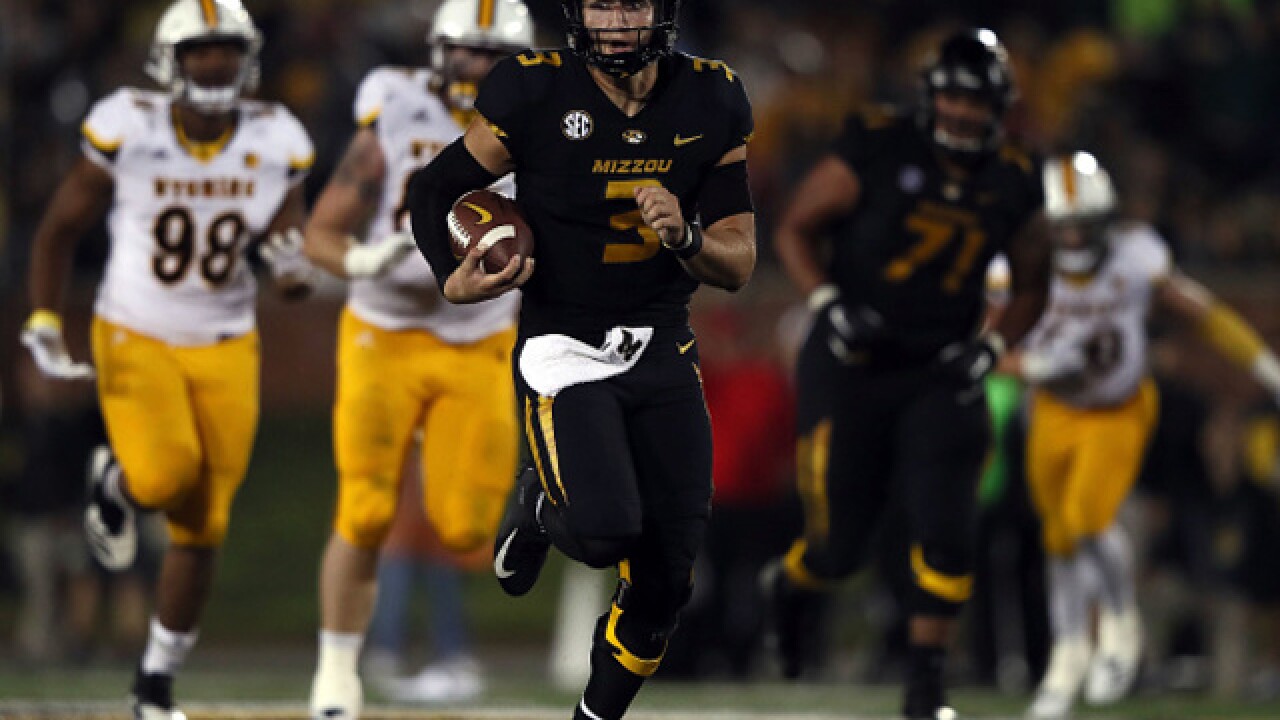 Copyright 2018 Scripps Media, Inc. All rights reserved. This material may not be published, broadcast, rewritten, or redistributed.
Jamie Squire
<p>COLUMBIA, MO - SEPTEMBER 08: Quarterback Drew Lock #3 of the Missouri Tigers carries the ball during the game against the Wyoming Cowboys at Faurot Field/Memorial Stadium on September 8, 2018 in Columbia, Missouri. (Photo by Jamie Squire/Getty Images)</p>

COLUMBIA, Mo. (AP) — Missouri quarterback Drew Lock usually dissects defenses with his arm. Wyoming learned the hard way that his legs have a little juice, too. Lock threw four touchdown passes and ran for another TD as the Tigers won 40-13 on Saturday night.

The senior quarterback is known for his gaudy passing numbers, and he added to them against the Cowboys, completing 33 of 45 passes for 398 yards. He added a career-high 51 rushing yards, which was almost half of his total for all of last season.

"I'm glad I could put that on film to show people I am athletic, even though I knew I was athletic the whole time," Lock said with a laugh.

In the second quarter, Lock showed nifty footwork dodging defenders on a 12-yard touchdown scramble. He bowled over cornerback Antonio Hull to convert a third-and-7 play on the ensuing drive. He finished that possession with a 19-yard touchdown pass to tight end Albert Okwuegbunam that gave the Tigers a 16-0 halftime lead.

Missouri (2-0) scored on its first four possession of the second half to put the game out of reach.

After a fruitless first half full of misfired pass attempts and stuffed runs, Wyoming (1-2) looked better offensively in the second half. Jevon Bigelow scored on a 7-yard touchdown run, and Cooper Rothe connected on field goals of 51 and 36 yards. Tyler Vander Waal completed 13 of 28 passes for 160 yards.

Wyoming: Senior running back Nico Evans, who had rushed for 279 yards in the first two games, didn't make the trip to Missouri. Without Evans, who injured his ribs in the third quarter of Wyoming's loss to Washington State on Sept. 1, the Cowboys rushed for 88 yards against the Tigers.

Missouri: Emanuel Hall didn't even start the first four games of last season, but since then he has established himself as one of the nation's most productive wide receivers. Hall caught 10 passes for 171 yards and a touchdown against Wyoming, giving him 14 catches for 342 yards in two games. "He's matured as a competitor," Missouri coach Barry Odom said. "He's matured in his ability to prepare the right way during the week. He has grown up. He has the ability at times to take over a game."

Wyoming: The Cowboys will host FCS opponent Wofford on Saturday.

Missouri: The Tigers will try to avenge last year's 35-3 loss to Purdue when they play the Boilermakers in West Lafayette, Ind.