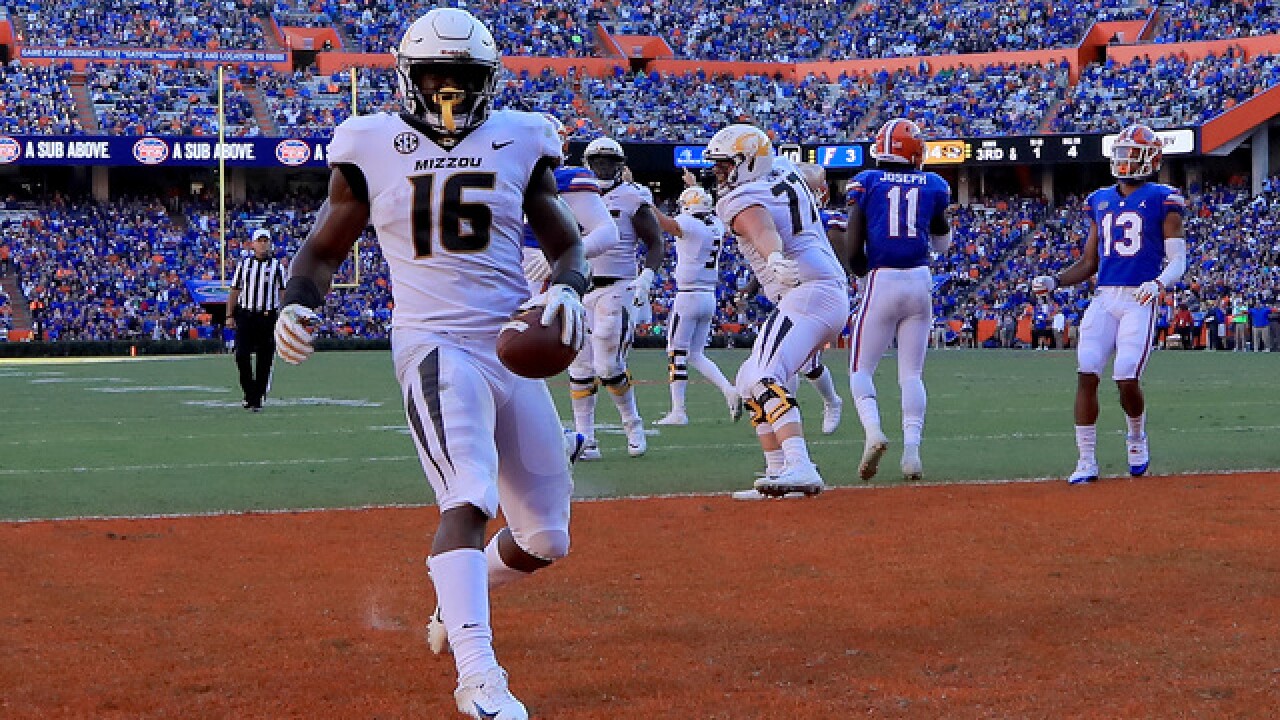 Copyright 2018 Scripps Media, Inc. All rights reserved. This material may not be published, broadcast, rewritten, or redistributed.
Sam Greenwood
<p>GAINESVILLE, FL - NOVEMBER Damarea Crockett #16 of the Missouri Tigers crosses the goal line for a touchdown during the game against the Florida Gators at Ben Hill Griffin Stadium on November 3, 2018 in Gainesville, Florida. (Photo by Sam Greenwood/Getty Images)</p>

Lock completed 24 of 32 passes for 250 yards, with scoring throws to Albert Okwuegbunam, Kam Scott and Emanuel Hall that stunned the Swamp.

Fortunately for the Gators (6-3, 4-3 Southeastern Conference), they won't have to face the senior and possible first-round draft pick again.

They might have seen the last of Feleipe Franks, too.

Coach Dan Mullen benched Franks late in the third quarter -- the home crowd cheered wildly -- and backup Kyle Trask promptly directed a 75-yard touchdown drive in which he converted two fourth downs. Trask found Josh Hammond in the end zone on the second one for a 7-yard score that made it 35-17.

The Tigers (5-4, 1-4) responded with a field goal that essentially sealed their first SEC win of the season and sent fans scrambling for the exits.

Lock and Missouri also torched Florida last year, winning 45-16 just days after the team parted ways with coach Jim McElwain. The Gators went into that one with an array of emotions.

They had no excuses this time around.

But Florida, which was eliminated from the SEC East race with a 36-17 loss against Georgia last week, came out flat and didn't find a spark until it was too late.

Lock had a lot to do with the lopsided affair, showing why he's considered a top NFL talent. His 41-yard throw to Hall down the sideline was perfect, setting up a touchdown run in which Lock held the defensive end before pitching the ball.

And his TD throw to Okwuegbunam came after a pre-snap read and adjustment.

Lock got plenty of help from his experienced offensive line and running backs.

Damarea Crockett ran for 114 yards and a touchdown, and Larry Roundtree added 72 yards and a score.

Roundtree scored three times against the Gators in 2017. Lock completed 15 of 20 passes for 228 yards and three TDs in that one.

He hadn't been nearly as good against the SEC this season, completing 50 percent of his passes for 732 yards, with one touchdown and five interceptions, against Georgia, South Carolina, Alabama and Kentucky.

Missouri: The Tigers beat Florida for the fourth time in the last six meetings, including twice on homecoming. All six have been blowouts, with Florida's 21-3 victory in 2015 being the closest contest.

Florida: The Gators opened a three-game homestand with a dud and looked lost on both sides of the ball, ending with the worst loss in Dan Mullen's first year.

Florida could drop out of the Top 25 poll after back-to-back lopsided losses to Georgia and Missouri.

Mizzou ruled out Okwuegbunam after halftime because of a bruised right shoulder. The Tigers also ruled out backup running back Tyler Badie because of a sprained right foot. ... Florida receiver Freddie Swain was helped off the field at halftime but returned after the break.

Missouri: Hosts Vanderbilt with a chance to become bowl eligible.