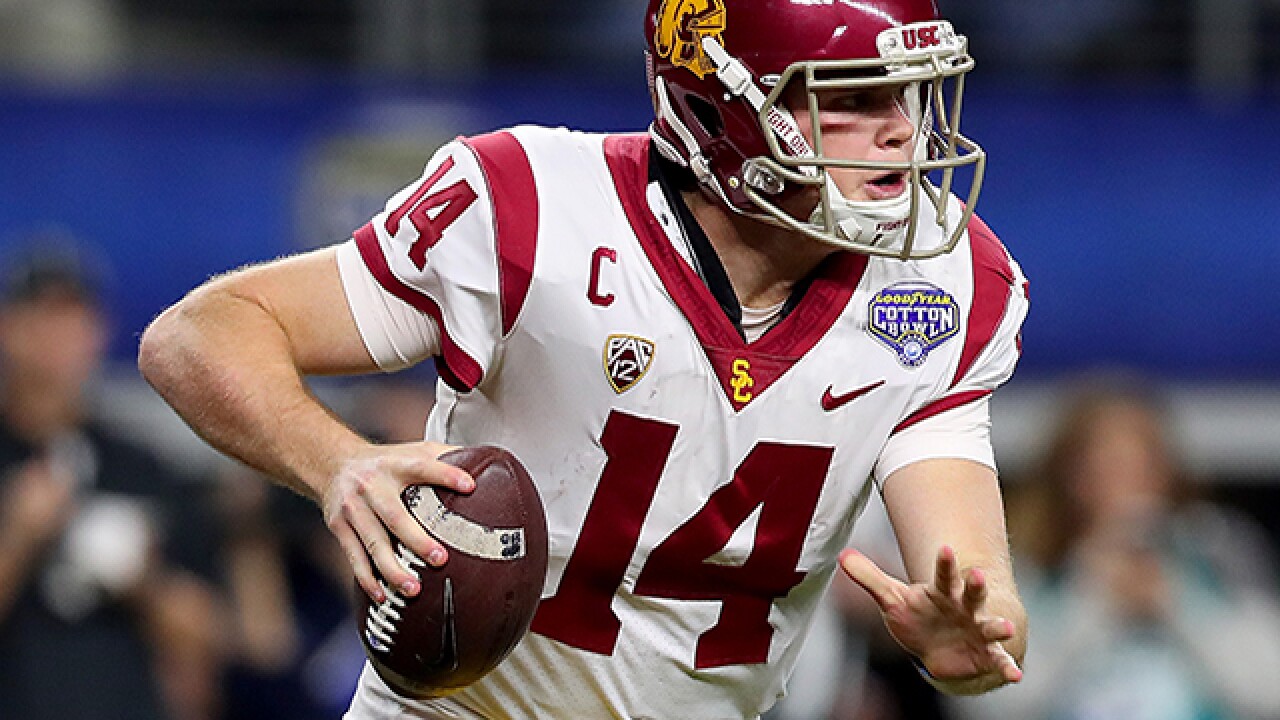 Copyright 2018 Scripps Media, Inc. All rights reserved. This material may not be published, broadcast, rewritten, or redistributed.
Tom Pennington
<p>ARLINGTON, TX - DECEMBER 29: Sam Darnold #14 of the USC Trojans looks for an open receiver against the Ohio State Buckeyes during the Goodyear Cotton Bowl Classic at AT&T Stadium on December 29, 2017 in Arlington, Texas. (Photo by Tom Pennington/Getty Images)</p>

KANSAS CITY, Mo. – Diehard football fans get a dose of pigskin tonight with the start of the 2018 NFL Draft.

The first round arrives at 7 p.m., and there’s a unique unpredictability to this year’s draft.

Former Chiefs General Manager John Dorsey, now GM of the Cleveland Browns, has kept his decision close to the vest. His decisions at one and four could create a potential domino effect that ripples through the entire first round.

Although the Chiefs are currently not slated in the first round, don't be surprised if Chiefs GM Brett Veach were to trade up if the right player falls in the 20 to 32 range.

Barring any trades, here’s the best guess of what teams will do in the first round:

2. New York Giants: RB Saquon Barkley, Penn State
Giants GM David Gettleman has a history of drafting for the front seven and skill position players. Barkley would provide the Giants one of the most dynamic offensive weapons in the draft. The former Nitty Lion can take it the distance on any play.

3. New York Jets QB Baker Mayfield, Oklahoma
The Jets need to invest highly in a long term play at quarterback. Josh McCown is 39 years-old and Teddy Bridgewater is coming off a serious injury sustained in Minnesota. Mayfield provides the Jets with an athletic and accurate quarterback prospect. If Darnold were to drop though, he likely wouldn't make it past the Jets.

4. Cleveland Browns: DE Bradley Chubb, NC State
Dorsey back on the board again gets to take the top quarterback and pass rusher in the same draft. There are worse ways to start off a draft tenure.

6. Indianapolis Colts: LB Roquan Smith, Georgia
The Colts missed out on Anthony Hitchens when he signed with the Chiefs. For the scheme that defensive coordinator Matt Eberflus runs, he needs an athletic inside linebacker. Hitchens fit the bill but ended up in Kansas City during free agency. Smith also checks the boxes for Colts general manager Chris Ballard who wants players with unique traits.

7. Tampa Bay Buccaneers: S Derwin James, Florida State
James is a tempo setter with his style of play and would provide the Bucs a much needed jolt in range and hard hitting ability.

9. San Francisco 49ers: LB Tremaine Edmunds, Virginia Tech
With the cloudy future of Reuben Foster on the horizon, the 49ers have to address their linebacker position quicker than they would probably like.

10. Oakland Raiders: CB Denzel Ward, Ohio State
Jon Gruden is in need of secondary help and Ward provides the team an athletic corner who can do just that.

11. Miami Dolphins: OT Kolton Miller, UCLA
The Dolphins will have to decide between their need for a future quarterback, offensive line, defensive tackle and inside linebacker. Miami goes with an offensive lineman that has very good technique overall with a flaw in his footwork in pass protection.

12. Buffalo Bills: QB Josh Allen, Wyoming
The Bills can't take the next step as a franchise without investing in a quarterback. Allen provides Buffalo with a strong armed quarterback that will need quarterback's coach David Culley to fix his footwork and aiming points to improve his accuracy.

14. Green Bay Packers: CB Josh Jackson, Iowa
The Packers have needs at receiver, edge rusher and cornerback. Jackson provides defensive coordinator Mike Pettine with a ball-hawking corner that always seems to be around the football and in good position.

15. Arizona Cardinals: QB Josh Rosen, UCLA
The Cardinals end up finishing last in the quarterback musical chairs game. Rosen has a lot of inaccuracy issues but the Cardinals need to have a backup plan with Sam Bradford at the helm.

16. Baltimore Ravens: WR Calvin Ridley, Alabama
Ozzie Newsome's receiver make-over project would be complete with the selection of speed receiver Ridley. Baltimore has two possession receivers in Willie Snead and Michael Crabtree. They added a speed receiver with John Brown but Breshad Perriman's injury history will likely force them to make this selection.

17. Los Angeles Chargers: DL Taven Bryan, Florida
The Chargers are set on the outside with Joey Bosa and Melvin Ingram. Bryan provides the pass rushing tandem an inside presense that could take advantage of the attention the edge rushers would demand and help the Chargers consistently win inside.

20. Detroit Lions: DE Harold Landry, Boston College
Lions head coach Matt Patricia needs to find a pass rush to pair on the opposite side of Ezekiel Ansah. Landry is a polished pass rusher in his bend, rush moves and hand fighting ability.

21. Cincinnati Bengals: C James Daniels, Iowa
Daniels has the athletic ability and proper technique to provide the Bengals with a much needed jolt along the interior of their offensive line.

22. Buffalo Bills: OG Isaiah Wynn, Georgia
The Bills need a violent blocker along the offensive line and Wynn provides them one with his punch.

23. New England Patriots: QB Lamar Jackson, Louisville
The Patriots surprise the world and take the next heir apparent to Tom Brady. Jackson needs coaches like Bill Belichick and Josh McDaniels to bring out his full potential as a quarterback. Sitting behind Tom Brady isn't a bad way to learn the game early on.

24. Carolina Panthers: WR DJ Moore, Maryland
Cam Newton needs more weapons at wide receiver. Moore would provide the Panthers a receiver that has good footwork, clean cuts and keeps his speed consistent during the route before pushing it in high gear.

25. Tennessee Titans: LB Rashaan Evans, Alabama
Head coach Mike Vrabel begins to build the defense in his image with an athletic inside linebacker to pair with Wesley Woodyard.

26. Atlanta Falcons: CB Jaire Alexander, Louisville
The Falcons need help at the cornerback position. Alexander would provide them with an explosive corner. He was recruited by Louisville as a wide receiver and transitioned to cornerback in college. He has a great feel for the routes.

27. New Orleans Saints: TE Dallas Goedert, South Dakota State
Quarterback Drew Brees lost out on his reunion with Jimmy Graham. Goedert would provide Sean Payton and Brees with the next chapter of their tight end journey. He has athletic ability that rivals Travis Kelce on tape. Goedert is dangerous with the ball in his hand in the open field.

28. Pittsburgh Steelers: S Minkah Fitzpatrick, Alabama
The Steelers need help in their secondary. Fitzpatrick is the best player on the board who played a cornerback, safety and nickel during his time at Alabama. Mike Tomlin would be getting a defensive back with smooth hips, good speed and range to go with it.

29. Jacksonville Jaguars: WR DJ Chark, LSU
The Jaguars don't have many needs overall on the roster outside of quarterback. Chark allows the team to add a big body wide receiver to replace Allen Robinson. Keenan McCardell has done an impressive job working with the receivers down in Jacksonville and would get the most out of this pick.

30. Minnesota Vikings: OG Will Hernandez, UTEP
The Vikings must protect Kirk Cousins. Hernandez gives them a strong and athletic guard to do just that.

31. New England Patriots: OT Connor Williams, Texas
The loss of Nate Solider makes the need for a long term plan at left tackle pressing. Wiliams might end up being the best offensive tackle in this draft.

32. Philadelphia Eagles: RB Ronald Jones, USC
The Super Bowl champions have needs at inside linebacker but the chance to draft Jamaal Charles part two could be hard to pass up for Doug Pederson.