Muhammad Ali exhibit opens in venue of "Thrilla in Manila" 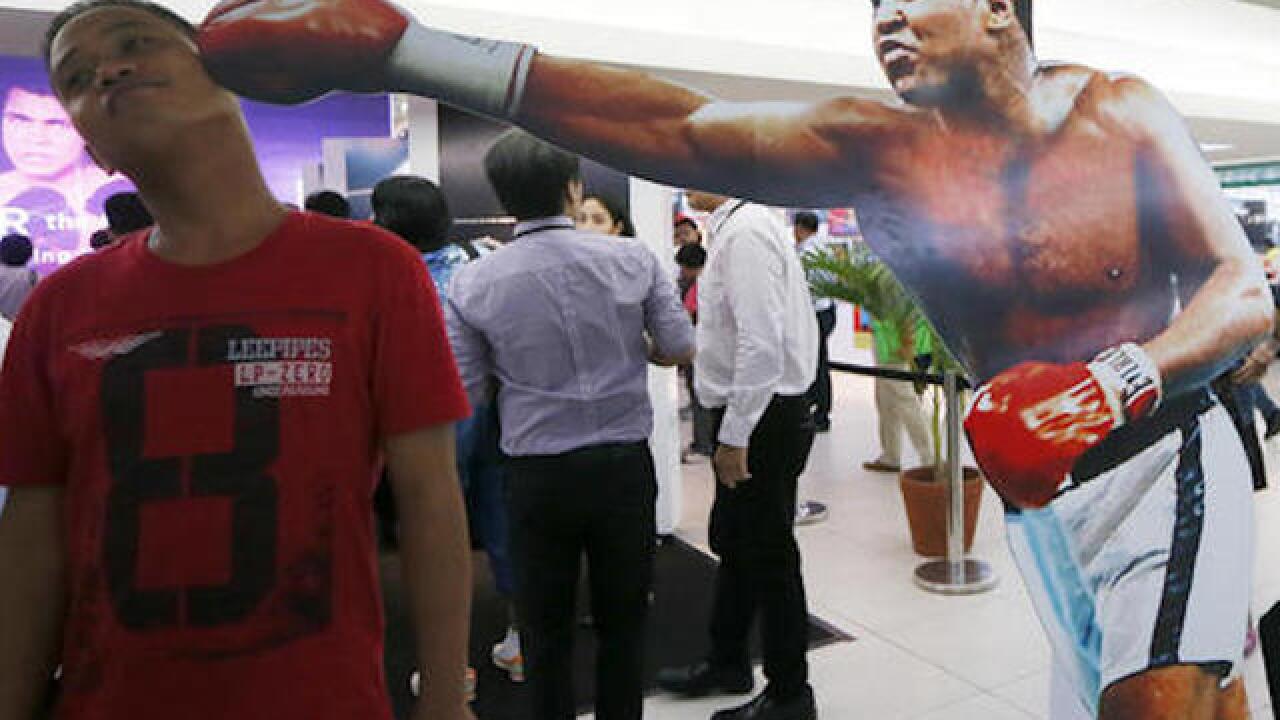 Copyright Associated Press
Bullit Marquez
<p>A Filipino fan poses before a standee of Muhammad Ali during the launch of an exhibit of photos and memorabilia of the "Thrilla in Manila" World Heavyweight boxing fight between Muhammad Ali and Joe Frazier at The Ali Mall in suburban Quezon city northeast of Manila, Philippines Friday, June 10, 2016. The exhibit was launched to pay tribute to Muhammad Ali who died exactly a week ago Friday. (AP Photo/Bullit Marquez)</p>

The display near Araneta Coliseum at Ali Mall was launched hours before Ali's burial in the United States. Ali died June 3 at age 74.

Outside the coliseum, a cutout picture of Ali stands in a boxing ring. Fans crowded around a screen playing videos of the 1975 match that put the Philippines on the map. At the mall, memorabilia including boxing gloves with Ali's autograph, an original souvenir program and a gold commemorative coin also are on display.

The Oct. 1, 1975, heavyweight championship, one of the greatest boxing matches in history, was won by Ali on a technical knockout at the jam-packed coliseum in Manila's suburban Quezon city and was watched by a worldwide audience.

Some facts about the fight:

— It was the third fight between Ali and Frazier, his most bitter rival. The boxers had split the first two bouts, neither of which compared to the grueling rubber match. Ali retained the title when Frazier, who could not see, was kept by trainer Eddie Futch from answering the bell for the 15th round. When it was over, a physically and emotionally drained Ali said, "It was the closest thing to death."

— Then-Philippine dictator Ferdinand Marcos reportedly wanted to hold the bout in the Manila metropolis to deflect international and domestic attention from political restiveness and growing Muslim and communist insurgencies after placing the entire Philippines under martial rule three years earlier.

— Ali's preparations were upset before the fight when he introduced his mistress as his wife to Marcos and his wife, Imelda. Ali's wife, Belinda Ali, saw the introduction on television, flew to Manila and engaged Ali in a prolonged shouting match in his hotel.

— Sports commentator Ronnie Nathanielz, assigned by Marcos to act as government liaison to Ali, said that one day a Muslim religious man carrying a cane limped into Ali's hotel suite. After talking to the man for about 15 minutes, Ali wrote the man a $25,000 check. "Champ, you don't even know that man and you gave him $25,000," Nathanielz recalled saying. He said Ali replied: "He is a religious man, he won't cheat me. And even if he cheats me, God will take care of him."

— Why the Ali Mall? After the fight, the arena owner, Jorge Araneta, was so ecstatic he told Ali he would build a mall and name it after him. Ali was delighted and came back the next year for the mall's grand opening.