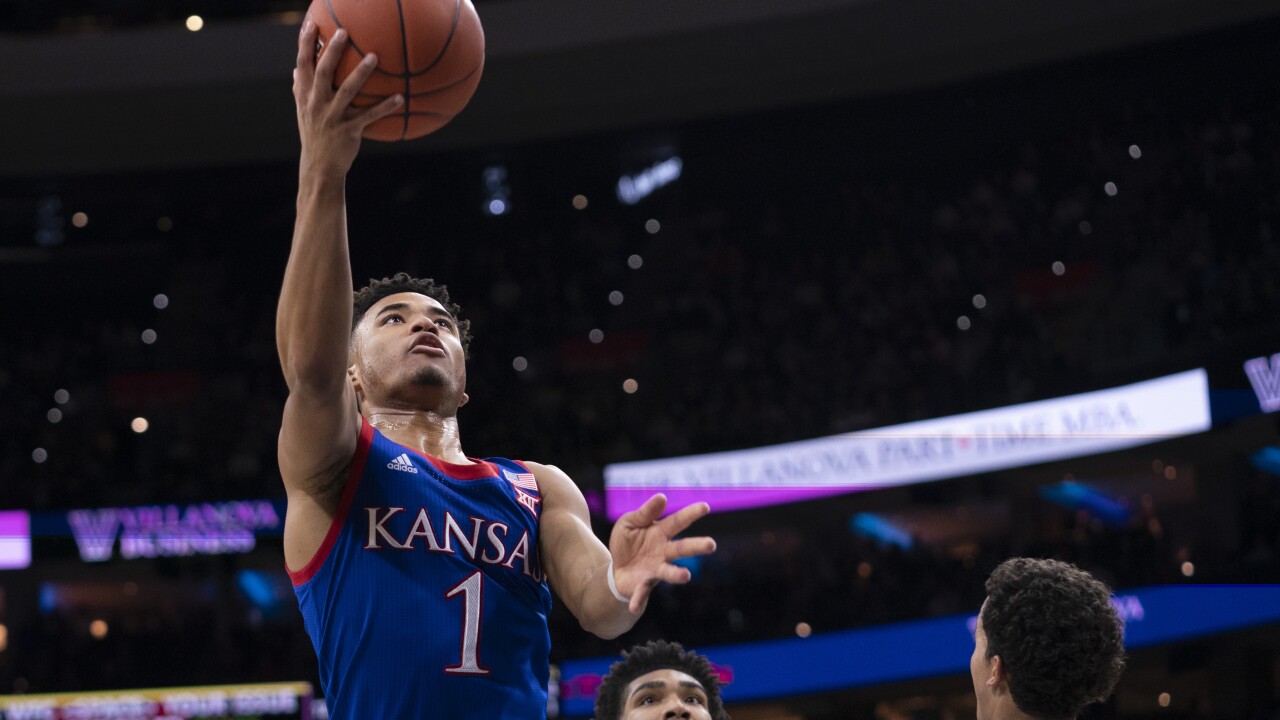 PHILADELPHIA — Jermaine Samuels hit a winning 3-pointer with 20.5 seconds left to lead No. 18 Villanova to a 56-55 victory on Saturday over Kansas, the the latest No. 1 to fall this season.

The Jayhawks (9-2) had moved up one spot to become the fifth team to top the poll this season. It is the first time the AP poll has had five different No. 1s before New Year's Day; the record for an entire season is seven, set in 1982-83.

Get ready for a sixth when the Top 25 is released Monday.

Unlike Duke and Louisville which lost to unranked teams, KU lost to a traditional national power that has had its number in recent seasons. The Wildcats (9-2) finally nudged ahead in a back-and-forth game in the final seconds.

Samuels hit the 3 to make it 56-55 that had more than 20,000 fans at the Wells Fargo Center going wild. But Collin Gillespie was whistled for a foul and KU's Devon Dotson missed his game-tying free throw.

The Wildcats threw the ball away with 11.2 seconds that gave KU possession and two looks at the basket. Dotson missed a contested layup on the final shot as the clock expired and Kansas' nine-game winning streak ended.

Samuels scored 15 points and Gillespie had 12 for Villanova.

Dotson led KU with 15 points and Udoka Azubuike had 12 points and 11 rebounds.

The game was full of long scoring lulls followed by rapid-fire baskets, but each team at last got rolling over the final eight minutes. Samuels sank a 3 as the shot clock expired for a 46-44 lead and Gillespie made it 51-49 on a 3 that came on the third shot of the possession.

The crowd at Wells Fargo Center was treated to riveting game between two schools that know how to win big games.

But the first half, however, was a dud. Villanova shot 29 percent and KU 37 percent, but the paltry percentages were due more to two teams missing open looks than any sort of defensive struggle.

The Wildcats made it a game with their one surge that had a packed house roaring. Cole Swider hit a 3, Cole Swider scored a fastbreak layup off a turnover and Justin Moore buried a 3, an 8-0 run that gave the Wildcats a one-point lead.

But from there -- as a saying in Philly college basketball goes -- "bad hoops." And this fit the definition, missed 3s, missed layups -- and so many missed opportunities for either team to pull away.

KU-Villanova has turned into one of the better nonconference rivalries since the turn of the century. Kansas beat Villanova in 2008 in the NCAA Tournament on the way to the national title; Nova got the Jayhawks back in 2016 and 2018 with tourney wins on its road to two national championships. Villanova's 83-62 win over No. 2 and undefeated Kansas in 2005 was a defining victory for a program still trying to find a path to prominence. The Wildcats would make the first of their 14 NCAA Tournament appearances under Jay Wright.

Kansas: The Jayhawks lost starting guard Marcus Garrett (9.4 points) with 5:14 left in the first half. Garrett took a hard spill and needed assistance walking off the court. He appeared to suffer an ankle injury.

Villanova: Robinson-Earl is the son of former KU forward Lester Earl. Earl played for the Jayhawks from 1997-2000.

Villanova opens Big East play against Xavier on Dec. 30 at the Pavilion