Medal for Mazdzer: For USA Luge, silver seemed like gold 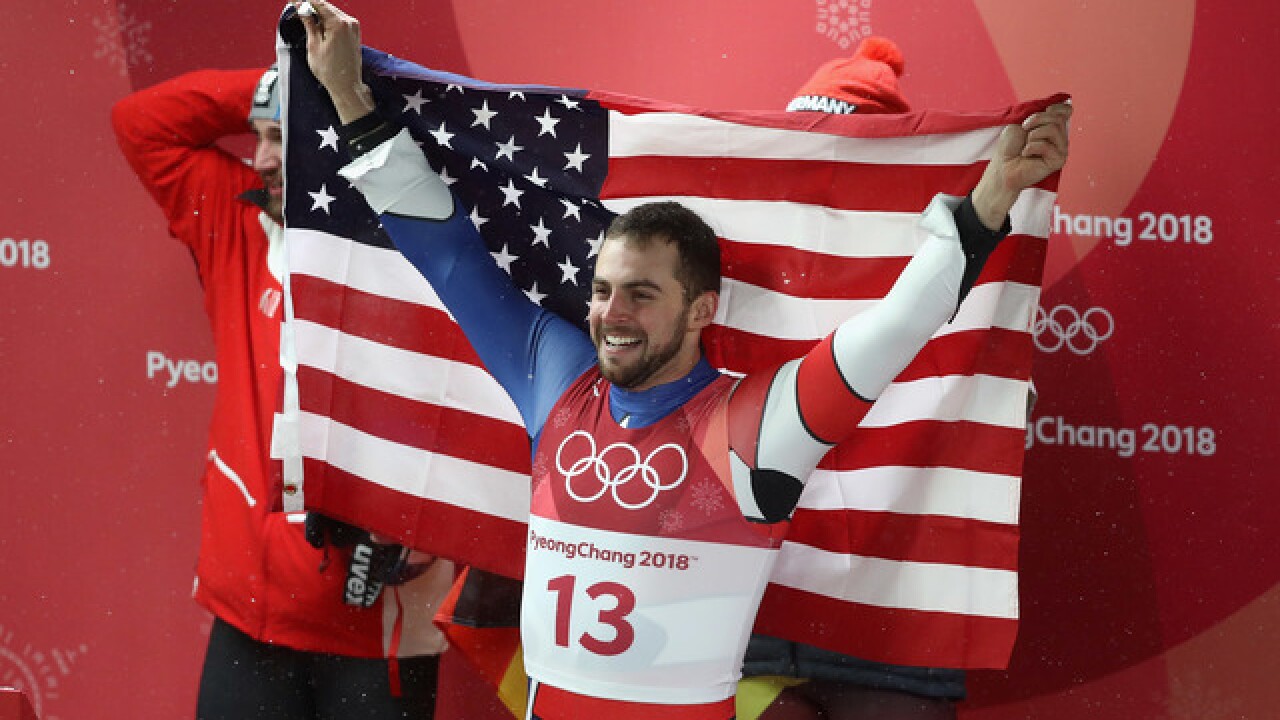 Image copyright 2018 Getty Images. All rights reserved. This material may not be published, broadcast, rewritten, or redistributed.
Ezra Shaw
<p>PYEONGCHANG-GUN, SOUTH KOREA - FEBRUARY 11: Chris Mazdzer of the United States celebrates after he won silver in the Luge Men's Singles on day two of the PyeongChang 2018 Winter Olympic Games at Olympic Sliding Centre on February 11, 2018 in Pyeongchang-gun, South Korea. (Photo by Ezra Shaw/Getty Images)</p>

PYEONGCHANG, South Korea (AP) — Chris Mazdzer threw a fist in the air, grabbed an American flag from the stands and let out a scream of absolute jubilation.

Not even a month ago, he was at rock bottom. On Sunday night, he made history for USA Luge.

For the first time, the United States has a men's singles Olympic luge medalist. Mazdzer won silver at the Pyeongchang Games, matching the best finish ever for USA Luge in any event at the Olympics — Americans have been second in doubles twice — and giving the native of Saranac Lake, New York, the sort of moment he's spent half a lifetime chasing.

"It's 16 years in the making, what you dream about as a young child and 20 years later you're finally on the podium," Mazdzer said. "I still don't know how to describe it. All I know is that I have my friends and family here celebrating with me and this is validation. Everything I've done, all the sacrifices, it's worth it."

For the rest of his life, he'll be introduced as an Olympic medalist. For the rest of his career, he'll know that he can come up big at the biggest moments. For the next few days, he'll get to bask in this medal while seeking another in the team relay.

A career that seemed to be going sideways just a few weeks ago is now right back on track.

"I trained with this kid every single day," said USA Luge teammate Taylor Morris, who was 18th in his Olympic debut. "Day-in, day-out, he is an animal. And it is paying off. A silver medal, just a few hundreths out from being an Olympic champion. That's just the mental and physical resiliency that he has and it just shows that hard work does pay off and dreaming big and never setting a ceiling for yourself, it pays off."

David Gleirscher of Austria was a surprise winner, finishing his four runs at the Alpensia Sliding Center in 3 minutes, 10.702 seconds for the gold. It was Austria's first in men's luge in 50 years, and Gleirscher's first major international medal ever — he's never even had one on the World Cup circuit. Mazdzer finished in 3:10.728 and Johannes Ludwig of Germany took third in 3:10.932.

Gold-medal favorite and two-time defending champion Felix Loch of Germany was the leader going into the final run, then skidded his way to fifth.

"I feel sorry for Felix," Ludwig said, "but I feel happy for me."

Mazdzer never looked happier after a race, either.

The only other USA Luge singles medal at an Olympics came four years ago, when Erin Hamlin won bronze at the Sochi Games. Mazdzer and Hamlin have been teammates for years, and Mazdzer has spent some offseason time over the years staying with her brother Ryan out in Utah.

The Hamlins couldn't have been more thrilled to see Mazdzer's breakout.

"He's worked his (butt) off," Ryan Hamlin said. "It's time some hardware comes his way."

It was a medal that seemed most improbable a few weeks ago, when Mazdzer — who finished the World Cup season not even close to the medal stand and 18th overall in the final rankings — went public with his season-long struggles in a  social media post  .

"There comes a point where giving it everything you have and believing in yourself starts to fade away and I am almost to that point," Mazdzer wrote. "For some reasons unknown to myself, things are not working out as planned.

"There is a light somewhere in this dark cave that I feel like I am stumbling aimlessly through at times and you better damn believe I'm going to find it."

So he got to work. He would tinker with his sled until 1 or 2 a.m. some nights. He asked competitors if he could lay on their sleds and get ideas for what to do with his own. Somehow, he found his groove again.

"That was my turning point that I knew he would do this," USA Luge coach Bill Tavares said. "Chris is one of the hardest-working, focused people that I know. In this sport, it takes so much. You need to relax and just let it go and he tries so hard it actually slows him down sometimes."

That's exactly the approach Mazdzer had in Pyeongchang: He went for broke, and it worked.

"This is a blinding light," Mazdzer said, "at the end of that tunnel."