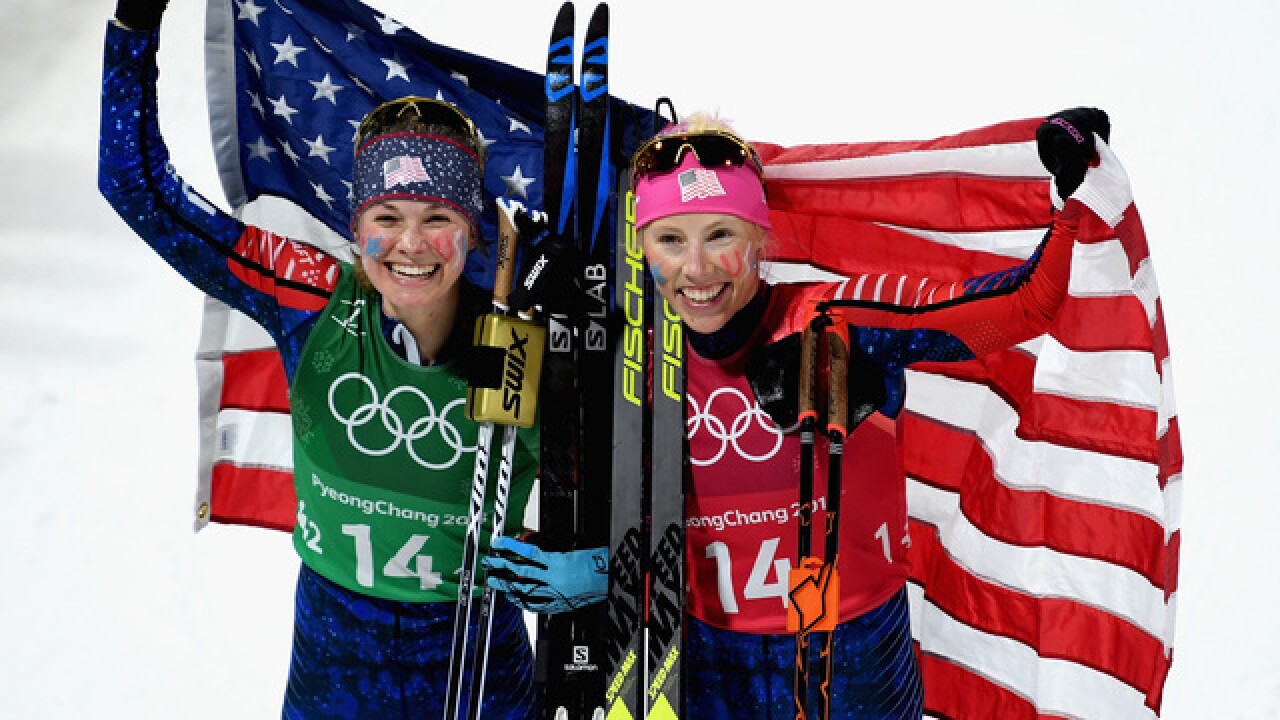 PYEONGCHANG, South Korea (AP) — As she headed up the steepest, most grueling hill of her life in third place, Jessica Diggins thought to herself just winning an Olympic medal was no longer good enough.

Diggins dug deep, remembering all the years of training she had put in, and of all her teammates waiting for her at the finish line to bring home the United States' first medal ever in women's cross-country skiing — and then she let loose.

Diggins reached the peak of the hill in third place but sped past Norway's Maiken Caspersen Falla on the last big, winding downhill. She rounded the final corner and took dead aim at Sweden's Stina Nilsson on the final 100-meter homestretch.

The crowd in the grandstand was on its feet sensing history, and at that moment Diggins said she felt "unstoppable."

"Around that final corner I felt like I was uncoiling a spring and letting it go," Diggins said. "Giving it everything I had, digging as deep as I could and putting it all out there. When your team is counting on you, you don't give up ever."

Diggins certainly didn't give up.

She blew by Nilsson in a blur to capture gold in the team sprint, bringing the United States its first gold medal ever in cross-country skiing.

As she crossed the line she collapsed in exhaustion as teammate Kikkan Randall tackled her in the snow. Randall lay on top of a crying Diggins shaking her ski jacket in pure excitement and utter joy.

"That feeling of being able to cross the line and have Kikkan tackle me was the coolest thing ever," Diggins said.

It was fitting Randall was her partner on the two-woman team. She has been through all of the tough times, competing with the American cross-country ski team since the 2002 Salt Lake City Games. She said it was also fitting that the American women won their first medal in a team event.

"I got to see in 2013 when we won the world championships ... that team gold is worth far more than any individual accolade," the 35-year-old Randall said. "What really kept me going over the last four years was trying to contribute toward a team medal. To do it with Jessie one more time is just amazing."

So move over Bill Koch, you have company — finally.

Koch was the only other American to win a medal in cross-country, taking home silver at the 1976 Innsbruck Games.

Diggins and Randall ended that 42-year drought and surely gave a huge boost to all of the young cross-country skiers back home in the United States.

"Hearing it out loud, it still doesn't feel real," Randall said. "It's what I've been working on for 20 years and with this team for the last five years and, wow, it's just so fun to put it together tonight — finally."

It meant more that their teammates where there to celebrate — and family, too.

Diggins' father, Clay, said he had a feeling this was the day the drought would end. Diggins had three top-six finishes at the Olympics and Randall was skiing well, too. And he said the entire American women's cross-country team came out to practice on Tuesday morning with Diggins and Randall.

"There were only two of them skiing today, but the entire team came out to support them — practicing tags and everything," Clay Diggins said. "That to me is pretty cool. They wanted to be there for them, for the team. And I think Kikkan and Jess felt that (support) on the course."

If not, they certainly felt it after the race.

Diggins screamed as she crossed the finish line, setting off a huge celebration for the red, white and blue. Her American teammates were jumping and hugging each other along the fence line that guarded the track.

"Our whole team had that belief we could win and everyone was there screaming," Diggins said of the final sprint. "I don't know if you have that many teams where everyone is out there on the fence yelling their faces off. I just think we had a lot of support behind of us."

Charlotte Kalla sensed the Americans were extra motivated for a medal, saying she saw it in their eyes before the race and felt it when Randall stayed on her heels on the second-to-last lap.

"Olympic champions, they are so worth it," the Swede said. "They were amazing today. I'm really impressed with them."

Sweden took silver and Norway finished with a bronze, which allowed Marit Bjoergen to secure her record 14th medal at the Winter Games. That broke her tie with Norwegian biathlete Ole Einar Bjoerndalen for the most medals at the Winter Olympics.

Bjoergen, who already had won gold, silver and bronze at the Pyeongchang Games, said she was happy to see the Americans win this one.

"Those two, they are happy girls," Bjoergen said. "And I think that is important for our sport that the USA is there."