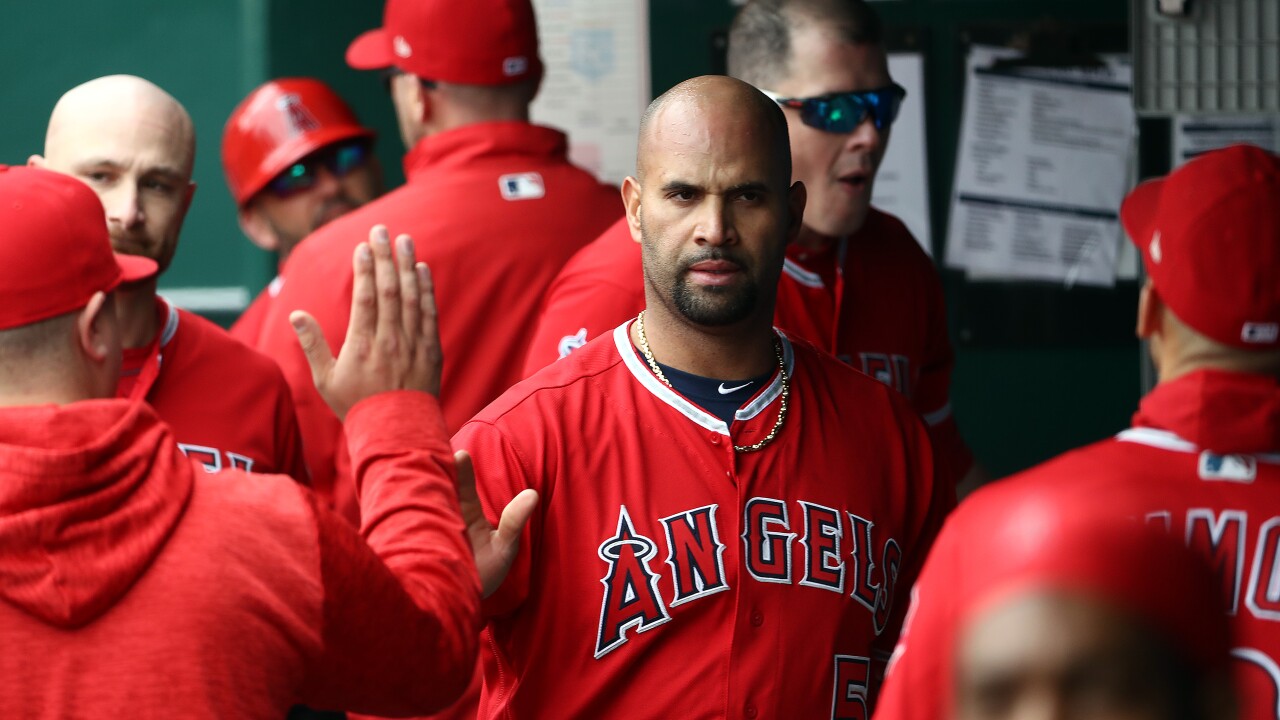 Jamie Squire/Getty Images
KANSAS CITY, MISSOURI - APRIL 28: Albert Pujols #5 of the Los Angeles Angels is congratulated by teammates in the dugout after knocking in two runs during the 1st inning of the game against the Kansas City Royals at Kauffman Stadium on April 28, 2019 in Kansas City, Missouri. With those two RBI's Pujols surpassed Barry Bonds to become third on the all-time RBI list. (Photo by Jamie Squire/Getty Images)

Two nights after passing Lou Gehrig for fourth place, Pujols increased his RBIs total to 1,997 when he pulled a fastball from Homer Bailey (2-3) just past third baseman Kelvin Gutierrez. Pujols trails only Hank Aaron (2,297) and Alex Rodriguez (2,086) in RBIs, which became an official statistic in 1920.

Matt Harvey (1-2) got his first win with the Angels, allowing one run and two hits in seven innings. He lowered his ERA from 8.03 to 6.54 as the Angels won a road series for the first time this season.

Bailey gave up six hits to his first 13 batters and retired his final 10. He allowed four runs in six innings.

Tommy LaStella's RBI groundout in the first and Andrelton Simmons' RBI single in the third boosted the lead to 4-0.

Kansas City scored in the fourth without a hit when Alex Gordon reached on a wild pitch as he struck out, advanced on a walk, took third on a flyout and came home on Jorge Soler's sacrifice fly.

Hunter Dozier's RBI single off Ty Buttrey in the eighth cut the Royals' deficit to 4-2.

Justin Bour hit a three-run home run in the ninth against Ben Lively.

Angels: OF/RHP Shohei Ohtani continues to improve in his return from Tommy John surgery, taking batting practice each day. Manager Brad Ausmus would not say when he might be ready to hit in a game.

Royals: OF Billy Hamilton was out of the lineup with right hamstring tightness, a day after leaving in the fifth inning.

Angels: Los Angeles plans to bring up top pitching prospect Griffin Canning to start Tuesday at Toronto in his major league debut. The 22-year-old right-hander is 1-0 with a 0.56 ERA at Salt Lake, allowing one earned run in 16 innings with 17 strikeouts and two walks. "I think we've always liked the stuff," manager Brad Aumus said. "There's been a little caution because of the limited time in the professional ranks, and of course, the pitch count, which we addressed by sending him to Arizona to get up to 90 pitches."