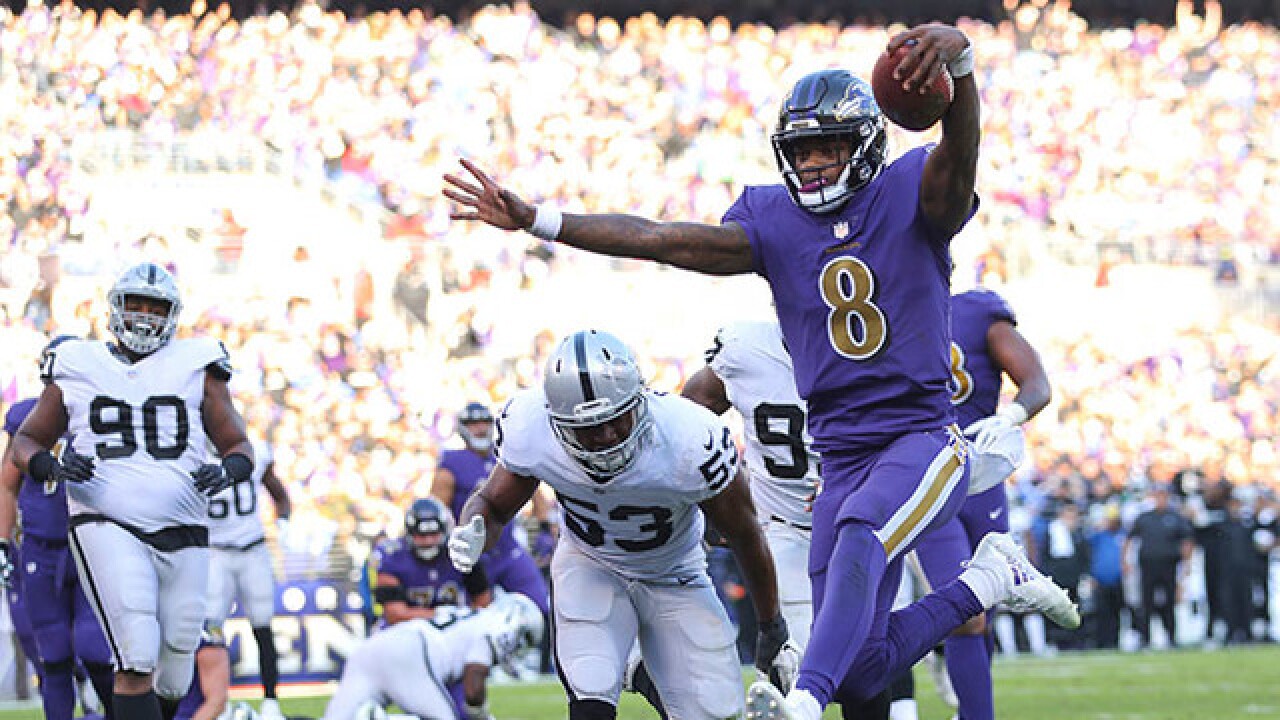 Image copyright 2018 Getty Images. All rights reserved. This material may not be published, broadcast, rewritten, or redistributed.
Patrick Smith/Getty Images
<p>Baltimore Ravens quarterback Lamar Jackson (8) scored a touchdown during the third quarter Nov. 25, 2018, against the Oakland Raiders at M&amp;T Bank Stadium in Baltimore. Containing Jackson will be key for the Kansas City Chiefs in Sunday&#39;s game at Arrowhead Stadium in Kansas City, Missouri.</p>

The Committee of 101 announced honorees Tuesday for the 50th Annual Salute to Professional Football.

Jackson led the Ravens to a second consecutive AFC North title and the best record in the NFL during his second professional season.

He became the first player in league history to throw for 3,000 yards and rush for 1,000 yards in the same season.

Jackson, who also was the first player in college football history to reach those milestones in back-to-back seasons, finished the season with 3,127 yards passing. He threw for a league-high 36 touchdowns and six interceptions.

Jackson also rushed for an NFL-record 1,206 yards, which ranked sixth in the NFL, and another seven touchdowns.

Jackson’s coach, Baltimore’s John Harbaugh, was selected as AFC Coach of the Year.

Meanwhile, Thomas set an NFL record with 149 receptions. He finished with 1,725 yards and nine touchdowns.

New England Patriots cornerback Stephon Gilmore and Arizona Cardinals linebacker Chandler Jones were chosen as the Defensive Players of the Year for the AFC and NFC, respectively.

San Francisco 49ers coach Kyle Shanahan, who guided his team to the No. 1 seed in the playoffs, won NFC Coach of the Year.

Among other awards, former Green Bay Packers quarterback Bart Starr will receive the Lamar Hunt Award for Professional Football for his contributions to the game.

The Chiefs' Mack Lee Hill and Derrick Thomas awards also will be presented to the team's rookie of the year and MVP.