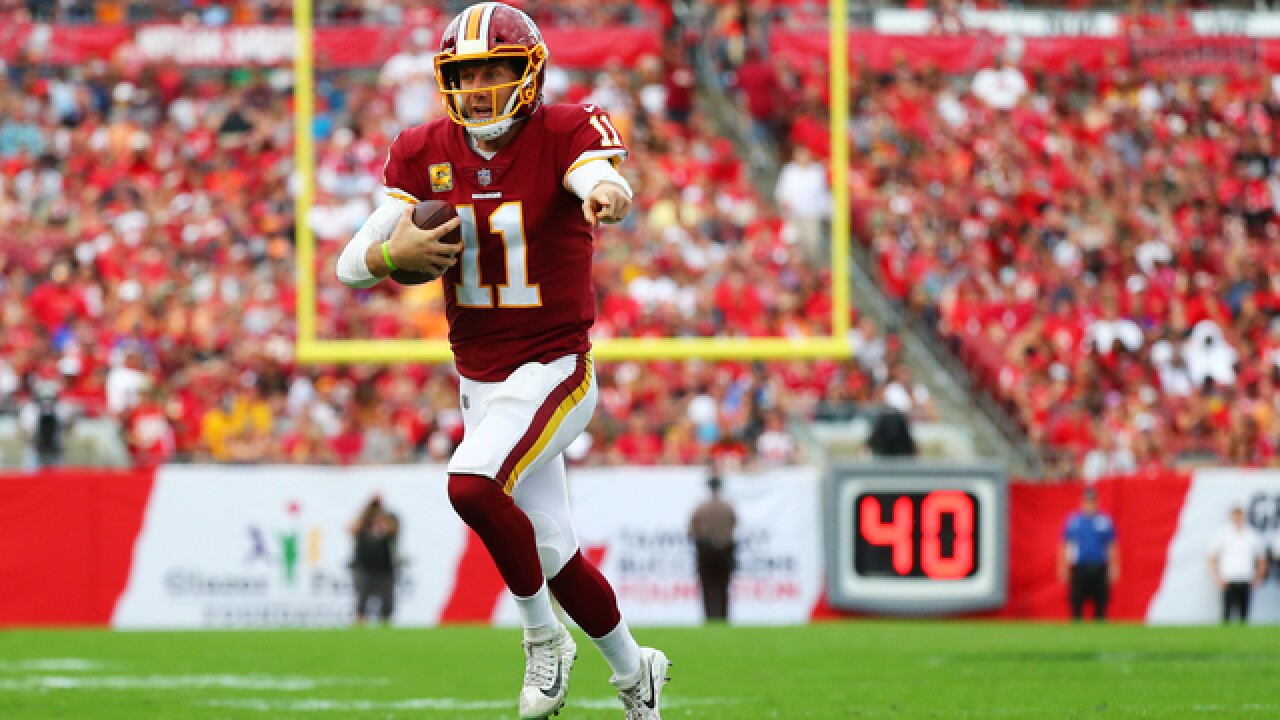 Copyright 2018 Scripps Media, Inc. All rights reserved. This material may not be published, broadcast, rewritten, or redistributed.
Will Vragovic
<p>TAMPA, FLORIDA - NOVEMBER 11: Alex Smith #11 of the Washington Redskins runs the ball for a nine yard gain during the fourth quarter against the Tampa Bay Buccaneers at Raymond James Stadium on November 11, 2018 in Tampa, Florida. (Photo by Will Vragovic/Getty Images)</p>

Thirty-three years to the day after the Redskins lost quarterback Joe Theismann to a broken leg, Alex Smith's season ended on an eerily similar injury in Washington's 23-21 loss to the Houston Texans on Sunday.

Smith broke his right tibia and fibula on a sack by Kareem Jackson midway through the third quarter and will require surgery. The veteran quarterback's leg turned the wrong way, much the way Theismann's did when he was sacked by Lawrence Taylor on a Monday night game in 1985.

"I know it was very painful for him and heartbreaking for a lot of people," Redskins coach Jay Gruden said. "He's a great guy and hard worker and one of the key leaders on this football team. These things happen in pro football, unfortunately. Just hate to see them happen with a guy like Alex."

Theismann attended the game and said he turned away after Smith went down.

Smith wasn't the only quarterback hurt during Sunday's early games. The Titans lost quarterback Marcus Mariota in the final minute of the first half of their blowout loss to the Colts when he reinjured his right elbow.

The Texans lost both of their starting guards against Washington -- Zach Fulton to a shoulder injury on the first drive and Senio Kelemete to an ankle injury in the second quarter. For the Redskins, defensive lineman Jonathan Allen was evaluated for a concussion but returned.

The Detroit Lions also suffered a blow on offense when rookie running back Kerryon Johnson hurt his left knee against the Carolina Panthers. He left in the third quarter and didn't return after running for 87 yards on 15 carries.

Panthers quarterback Cam Newton suffered an apparent ankle injury against the Lions. He left briefly in the third quarter but returned.

Ravens offensive tackle Ronnie Stanley, who's had ankle issues lately, limped off the field twice against the Bengals.

In the Giants' win over the Buccaneers, New York defensive lineman Kerry Wynn left in the second half with a concussion. Tampa Bay tight end O.J. Howard left in the fourth quarter with an ankle injury.

The defending Super Bowl champion Philadelphia Eagles were banged up even more as they were humiliated by the Saints. Center Jason Kelce hurt his elbow in the first quarter, safety Avonte Maddox left early with a knee injury, defensive back Rasul Douglas had to be helped off the field with a left leg injury and long snapper Rick Lovato was evaluated for a concussion.

For the Saints, right guard Larry Watford left in the third quarter to be evaluated for a concussion.

The Los Angeles Chargers lost defensive tackle Corey Liuget to a knee injury during the second quarter of their loss to the Broncos, and coach Anthony Lynn said after the game that the eighth-year player might miss the rest of the season. Denver wide receiver DeSean Hamilton hurt a knee in the second quarter, and cornerback Bradley Robey was evaluated for a concussion in the fourth quarter.

Brandon LaFell had a touchdown catch for the Raiders before he left in the second half of their win over the Cardinals with an Achilles tendon injury. Oakland cornerback Leon Hall hurt his back.

Cardinals linebacker Deone Bucannon left in the second half with a chest injury.