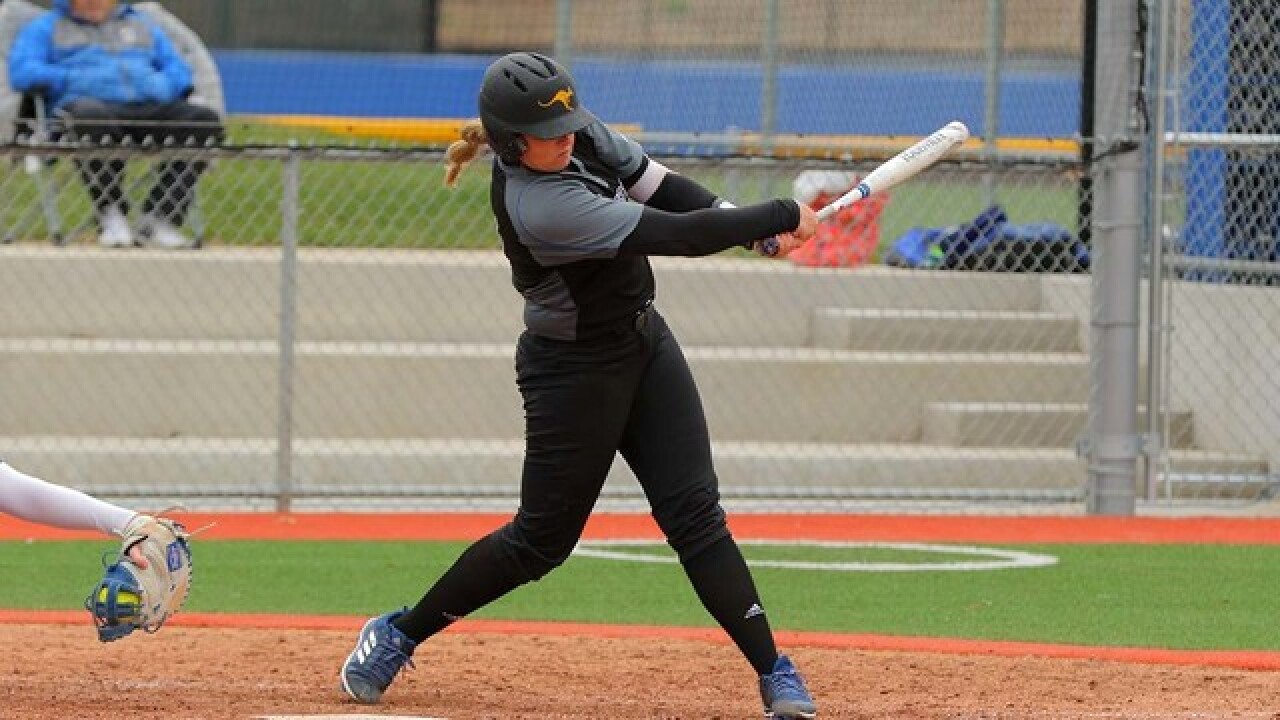 The UMKC softball team (10-31, 0-9 WAC) struck for fourteen hits and six runs in the third and final contest of a three-game set with Utah Valley (13-22, 5-3 WAC) but was unable to secure their first conference win of the season, falling by a 10-6 final score.

Olivia Fluehr (Loves Park, Ill.) made the start in the circle for the Roos but struggled to cool down a Utah Valley lineup that generated 17 runs combined in the first two games of the series. Fluehr threw 6.1 innings in the finale, allowing 10 runs (six earned) on nine hits while striking out a pair.

UVU capitalized on defensive miscues early on by UMKC, plating their first run on a two-out wild pitch before a two-run homer following an error put the team up 3-0 after the opening half of the first. The Wolverines used a passed ball in the second to strike for another score and got their leadoff hitter aboard in the third by way of an error, who later came around to score in the inning.

UMKC was able answer for single runs of their own in the second and third to keep the deficit at three runs. An RBI sac fly from Alyx Bloom (Clay Center, Kan.) opened up the scoring for the Roos in the second before an RBI single from Fluehr, her team-best 29th of the season, in the third narrowed the deficit to 5-2. Fluehr had a marvelous day at the plate, finishing the game going 3 for 3 with a walk, double and RBI.

Two runs in the fifth for UVU stretched the lead back out to a comfortable distance once more. UMKC fought back in the bottom half of the frame, loading the bases with two outs but a strikeout ended the threat. A two-out rally in the bottom of the sixth made things interesting, as Faith Willis (Kearney, Mo.) singled to center and was followed up with an RBI triple from Sydney Garcia (Kansas City, Mo.) who would also score on the play on a throwing error.

After Garcia’s extra-base hit, the Roos drew a walk and recorded back to back singles to center field to load the bases trailing 7-4. Kelsey Goodwin (Broken Arrow, Okla.) would keep the rally alive, reaching on an error by the UVU shortstop with another run crossing the plate for UMKC. A flyout following the miscue ended the frame with the Roos down just a pair of runs entering the final inning.

Two home runs in the top of the seventh put the Wolverines on top with a five-run edge as UMKC made one final effort to erase the deficit. An RBI single from Ashlin O’Brien (Fond du Lac, Wis.) plated the final run for the Roos before the team stranded their 11th and 12th runners on base in the last frame to end the contest at 10-6.

UMKC is back in action next week with a doubleheader against Creighton on Tuesday, Apr. 17 beginning at 2 p.m. CT before returning home to host CSU Bakersfield for a three-game weekend set on Apr. 20-21.