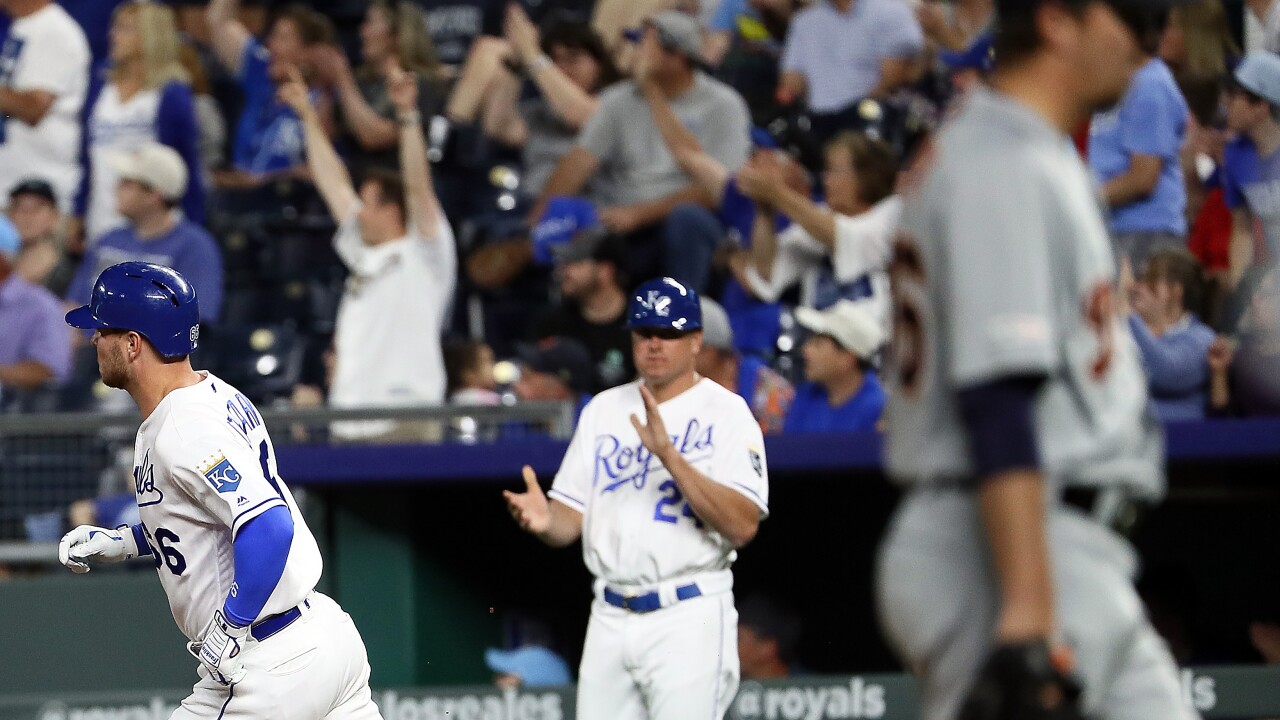 KANSAS CITY, Mo. — Jorge Soler had the tying RBI double in the eighth inning and Cheslor Cuthbert followed with the go-ahead run-scoring single to lead the Kansas City Royals to a 3-2 victory over the Detroit Tigers on Tuesday night.

Adalberto Mondesi started the rally with his third hit of the game, a double with one out off Daniel Stumpf, and scored on Soler's ensuing hit off Victor Alcantara (2-1). Terrance Gore ran for Soler and stole third. He then scored on Cuthbert's single between three fielders in right field to put the Royals ahead.

Scott Barlow (2-2) pitched a scoreless eighth inning to get the win, and Ian Kennedy got the last three outs for his fifth save.

The Tigers' bullpen wasted a brilliant effort from Spencer Turnbull. He scattered four hits and two walks with five strikeouts over six innings. It was only the third time in 14 starts that Turnbull had not allowed a run.

The Tigers got to Junis in the first on a 427-foot home run by Nicholas Castellanos to left-center. It was Castellanos' 100th career homer, all with the Tigers.

Junis gave up a run in the first inning for the ninth time in 14 starts. His ERA in those first innings is 8.36, compared to 4.71 in the other innings.

Brandon Dixon hit a 447-foot homer in the fourth, into the fountains 20 feet beyond where Castellanos' homer traveled, to put the Tigers up 2-0.

Following Turnbull's departure, Ryan O'Hearn led off the seventh with his sixth home run of the season. He broke an 0-for-15 slump with his 439-foot blast to right.

Royals 3B Hunter Dozier was eligible to come off the 10-day injured list, but he is not close to being ready. He's been on the IL since June 3, retroactive to May 31. Manager Ned Yost said, "We're going to be working him back into it, making sure everything is functional and feeling good. We've got to make sure that he's healthy, 100 percent. I don't know if we'll want to send him out on a rehab. When he's ready to go we'll make that decision."

Tigers: SS Niko Goodrum was removed from the game following the top of the third after he fouled a pitch off his knee. He left with a right knee contusion. He finished the at-bat with a strikeout and was replaced by Gordon Beckham in the bottom of the third.

The Tigers will send LHP Daniel Norris (2-5, 4.60 ERA) to the mound in the second game of the series. The Royals will counter with LHP Danny Duffy (3-3, 4.68 ERA). Duffy was hit on the right kneecap in his last start against Boston. The line drive bounced to third for the final out of the second inning. He came back out for the third but retired just one of six batters he faced in the inning before being pulled.