Salvy blasts walk off homer for 8-4 win over Twins

Perez step-up to the plate 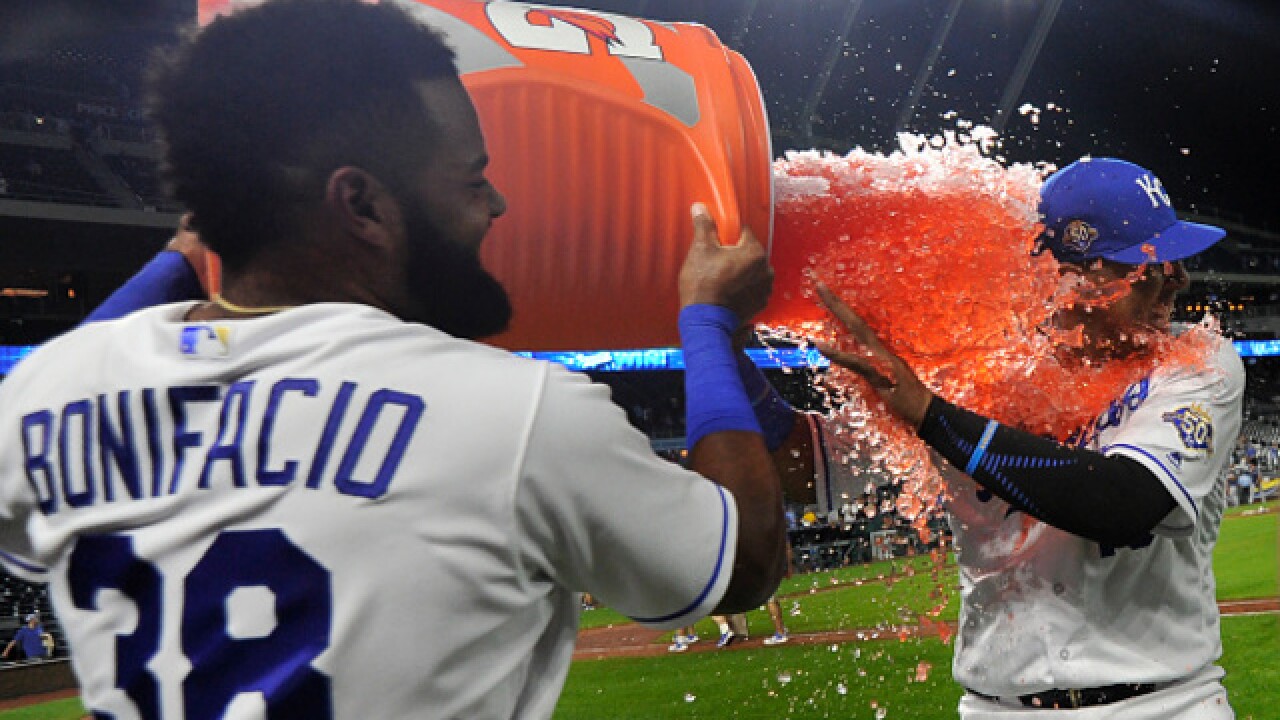 Copyright 2018 Scripps Media, Inc. All rights reserved. This material may not be published, broadcast, rewritten, or redistributed.
Ed Zurga
<p>KANSAS CITY, MO - SEPTEMBER 13: Salvador Perez #13 of the Kansas City Royals is doused with Gatorade by Jorge Bonifacio #38 as they celebrate a 6-4 win agains the Minnesota Twins at Kauffman Stadium on September 13, 2018 in Kansas City, Missouri. (Photo by Ed Zurga/Getty Images)</p> 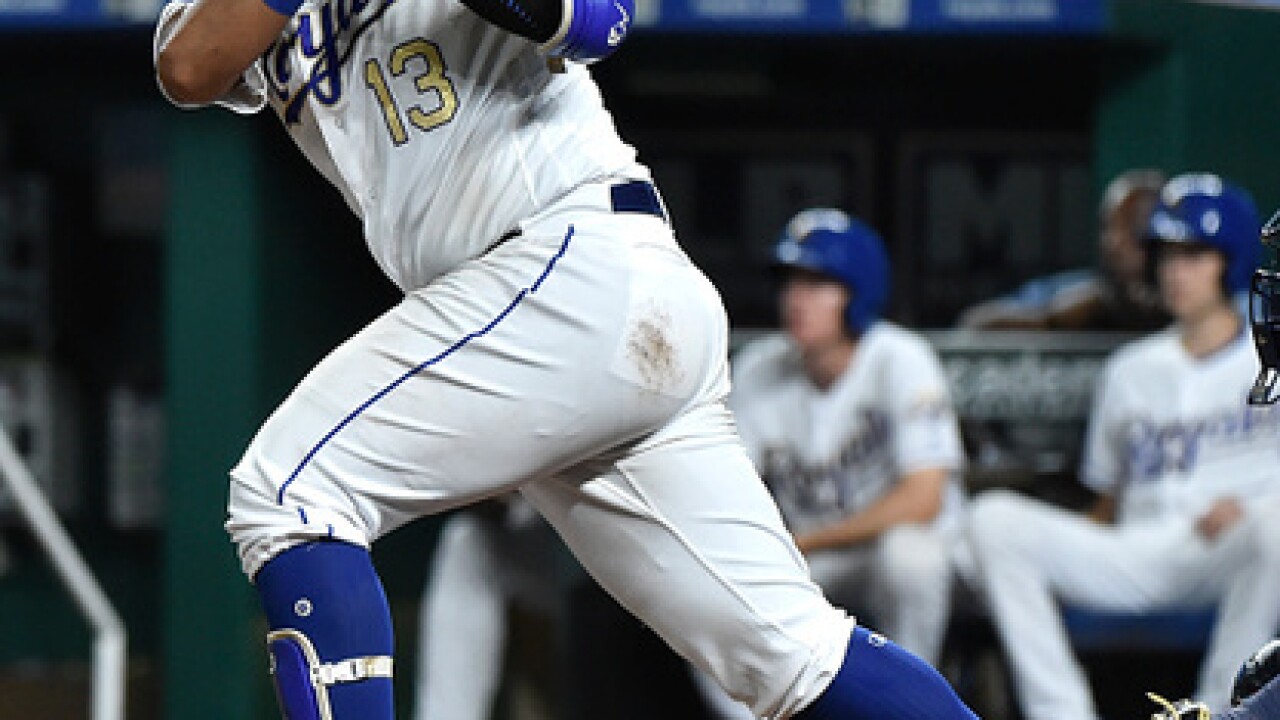 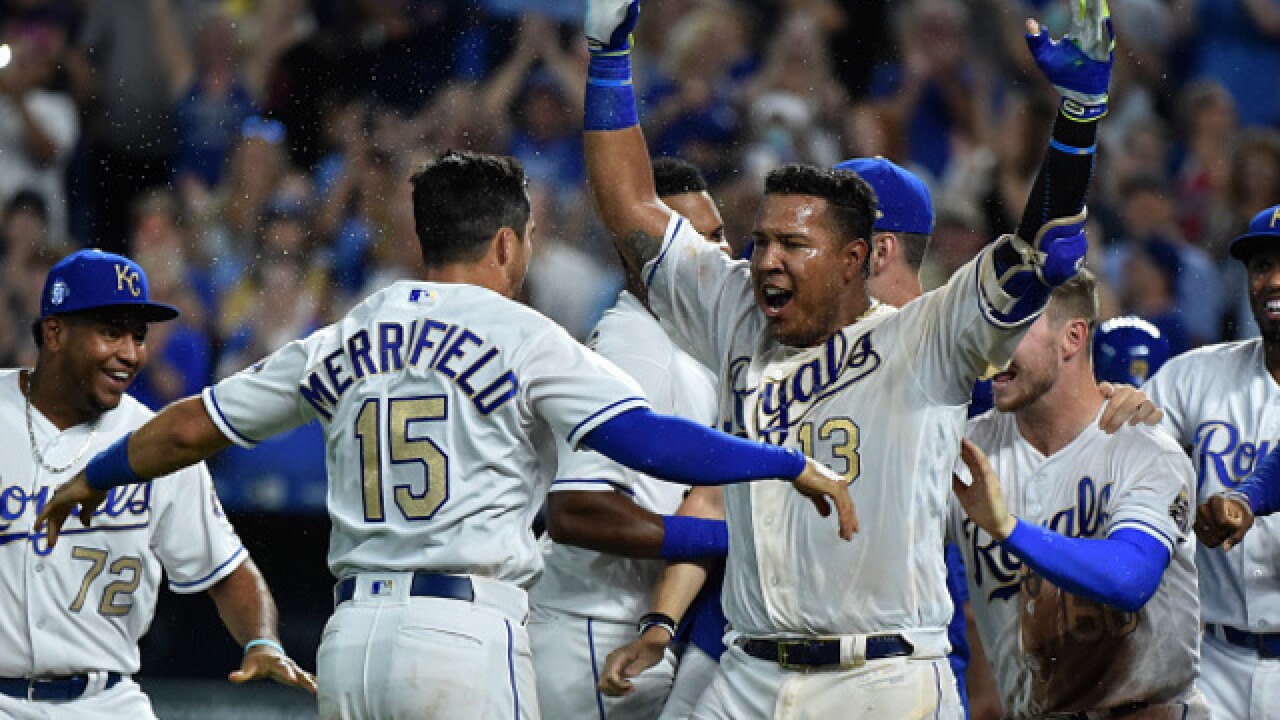 Rosell Herrera sparked the winning rally with a one-out double off Trevor Hildenberger (4-4), who took over as Minnesota's closer after Fernando Rodney was traded to Oakland last month. Whit Merrifield followed with an RBI single and advanced to third on Adalberto Mondesi's base hit.

Manager Paul Molitor then put in Logan Forsythe, giving the Twins five infielders, and Alex Gordon was intentionally walked to load the bases. But Perez thwarted the strategy with a drive to center for his 26th homer.

The Twins' loss lowered Cleveland's magic number for clinching the AL Central title to one.

Perez also had an RBI single in the first inning and Mondesi connected for his eighth homer in the seventh. Jason Hammel (3-13) pitched a scoreless inning for the win.

Robbie Grossman and Willians Astudillo each had three hits for Minnesota, which also dropped the opener of the four-game set on Thursday.

Joe Mauer had a run-scoring double in the Twins' three-run fifth, and Astudillo made it 4-2 when he singled in Grossman in the seventh.

But Mondesi went deep in the bottom half of the inning and the Royals nearly tied it in the eighth. Ryan O'Hearn tried to score from first on Jorge Bonifacio's two-out double, but Astudillo made a diving tag to get him at the plate.

Minnesota wasted a solid start by Jose Berrios, who struck out nine while pitching six innings of two-run ball.

Kansas City right-hander Jorge Lopez was charged with three runs and nine hits in 4 1/3 innings. He departed with a left rib contusion, but it's unclear when the injury occurred.

Mauer's double was his 598th extra-base hit, breaking a tie with Tony Oliva for fourth place on the Twins' career list. He trails only Harmon Killebrew (728), Kirby Puckett (687) and Kent Hrbek (623).

Royals: Lopez will be re-evaluated by the team training staff.

Twins: C Mitch Garver (head) remained sidelined for a second straight game while he awaits clearance from the training staff after taking a foul ball off the facemask, but he did hit in the cage before Friday's game. "I think that's another step forward today," manager Paul Molitor said. ... 3B Miguel Sano (lower left leg) was expected to work in the batting cage for a second consecutive day, but he remains out indefinitely.

Royals RHP Ian Kennedy (1-8, 4.92 ERA) will make his second start since returning from the disabled list and second straight start against the Twins, who send RHP Chase De Jong (0-0, 0.00) to the mound for his second appearance since a July 30 trade with the Seattle Mariners.