Simpson heads into Sunday with lead at The Players Championship 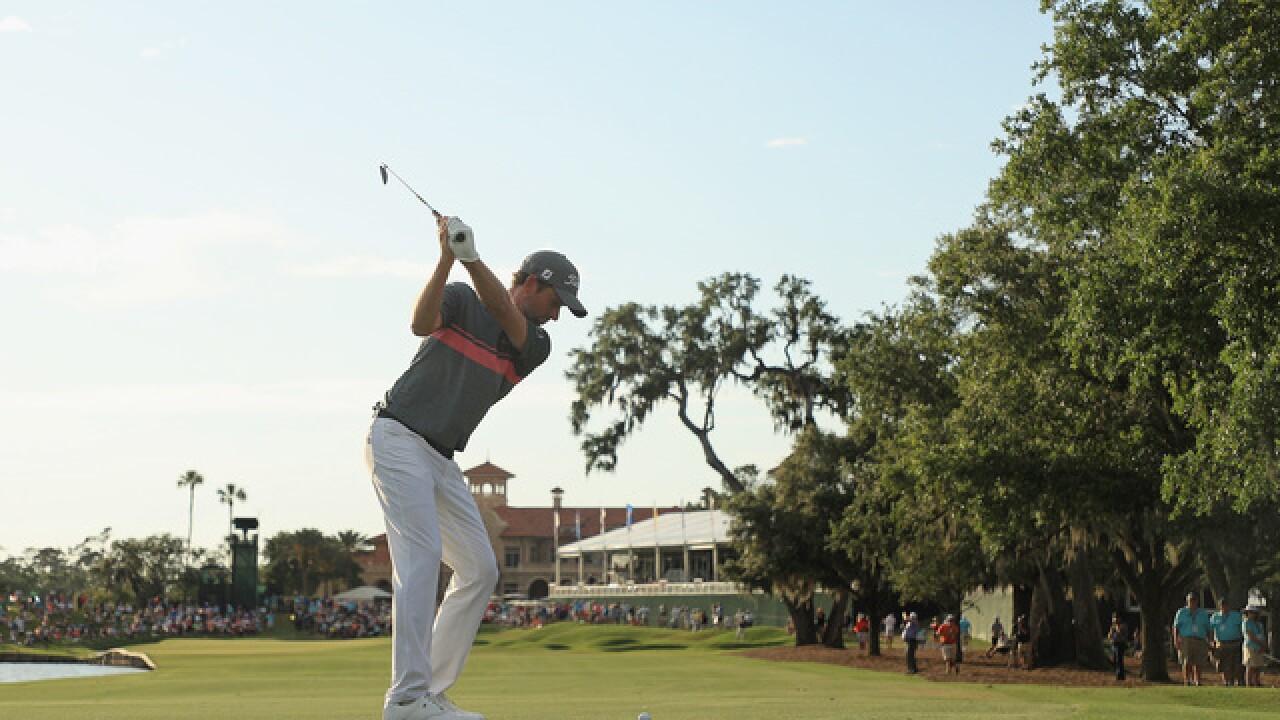 Copyright 2018 Scripps Media, Inc. All rights reserved. This material may not be published, broadcast, rewritten, or redistributed.
Mike Ehrmann
<p>PONTE VEDRA BEACH, FL - MAY 12: Webb Simpson of the United States plays a shot on the 18th hole during the third round of THE PLAYERS Championship on the Stadium Course at TPC Sawgrass on May 12, 2018 in Ponte Vedra Beach, Florida. (Photo by Mike Ehrmann/Getty Images)</p>

PONTE VEDRA BEACH, Fla. -- Webb Simpson isn't aware of the records he has tied or broken at The Players Championship. He saw that Tiger Woods and Jordan Spieth each made a big charge before he teed off Saturday, and it didn't rattle him at all.

"I think it helped me a little bit continue to think about making birdies," he said.

Simpson had a plan and didn't back off until he holed an 18-foot par on the final hole for a 4-under 68. He stretched his lead to a record seven shots, tied Greg Norman's 54-hole score at The Players that had not been touched in 24 years and left himself one more round to capture the richest prize in golf.

Simpson started with an 8-foot birdie. He holed a 100-foot bunker shot for eagle.

The 32-year-old Simpson has history on his side: No one has ever lost a 7-shot lead in the final round in PGA Tour history.

"All those things that have happened, I'd love to know them if I win tomorrow," Simpson said. "But I'm trying not to dwell there. I'm trying to just look forward, do what I always do on a Saturday night of a golf tournament and get ready tomorrow morning. And that's kind of where I'm at."

Danny Lee was leading the B-Flight with a bogey-free round of 70 but with birdies only on the two par 5s on the back nine. He will be in the final group.

"Just got to keep my hat down and play my own game and ... I don't know, where is he at?" Lee asked. Told that Simpson was 19 under, Lee digested that and responded, "That's an impressive three rounds, I think. It's going very, very well for him."

Dustin Johnson at least improved his chances of staying No. 1 with four birdies in his final 10 holes for a 69. He was in third place, nine shots behind, and figured all he could do Sunday was go as low as he could and see where it led.

Johnson is among six players to lose a 6-shot lead in the final round, which he did last fall in Shanghai. With danger lurking at every corner on the Pete Dye-designed Stadium Course, that would suggest that the crystal and largest paycheck in golf -- just shy of $2 million -- doesn't belong to Simpson just yet.

Even so, he hasn't shown any signs of cracking.

Lee was at 204, a score that would have led The Players in all but three of the years since it moved to May in 2007.

"If you take Webb out of the equation, the golf course is playing about like it always does," Johnson said. "He's the only one that's going really low."

Jason Day, among those at 9-under 207, had a four-shot lead when he won The Players two years ago. He knows what it's like to play with big leads, to win big.

"The good thing about Webb is he's played well, he doesn't have to do too much out there, he has to keep it in front of him," Day said. "Don't take unnecessary risk, and just kind of shoot 72 or somewhere in between 70, 72. You don't really need to go into the 60s."

Simpson hasn't won since Las Vegas in the fall of 2013, most of that due to struggles with the ban on the anchored stroke he used with his belly putter. His big break came a year ago, when Tim Clark suggested that along with a putter trip that rested along his left forearm, he use a claw grip.

"I'm thankful that I've put together a year of pretty solid putting, and it's really helped my golf kind of get me to the player that I want to be," Simpson said.