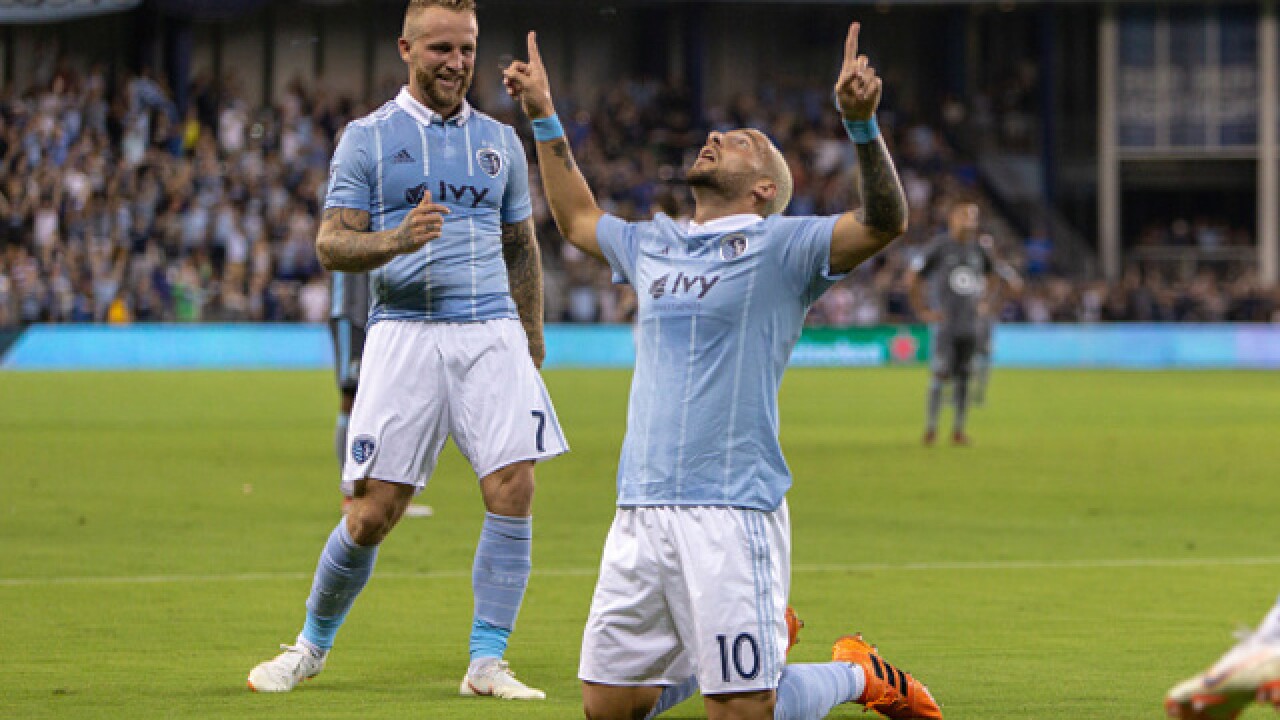 SEATTLE (AP) -- For most of the year, the Seattle Sounders weren't anywhere close to making the postseason.

With eight games left, not only are they very much in the picture, they're treating every game as if it's a playoff.

Raul Ruidiaz scored from the run of play, Nico Lodeiro converted a penalty kick and the Sounders took advantage of an own goal to beat Sporting Kansas City 3-1 on Saturday in a game between two of the hottest teams in MLS.

The Sounders (12-9-5) extended their club-record winning streak to eight games and set a league mark for consecutive wins in the non-shootout era (2000-present). The old mark of seven straight was set by Kansas City in 2012 and matched by Seattle with last Sunday's 1-0 victory at Portland.

"You always make your own luck -- and that group in there is starting to make their own luck," coach Brian Schmetzer said.

It wasn't until last Sunday's 1-0 victory at Portland that the Sounders climbed above the playoff red line for the first time all year. They have never missed the postseason since joining MLS as an expansion team in 2009.

"We want to continue this momentum. We don't want to be complacent - it's not over at all," Schmetzer said of the bid to be among the Western Conference's six qualifiers. "We must be able to close out this season in the best way possible.

"We understand it's pro sports and we don't expect to go all the way undefeated," Schmetzer added.

"But that certainly is the goal. We need to collect points in every single game, home and away.".

"I actually thought we played very well. To be able to come into the opposing team's home field and play the way we did, we deserved more," KC coach Peter Vermes said. "The two goals they scored -- Nos. 2 and 3 -- were unlucky on our part."

Unbeaten in their last 11 (9-0-2), the Sounders had to come from behind in this one after Diego Rubio put Kansas City on the board just 96 seconds into the game.

Ruidiaz tied it in the 12th minute with a 5-yard shot straight in front of a wide-open net as goalkeeper Tim Meila had come off his line to play a crossing pass.

Seattle went up 2-1 in the 52nd minute. Harry Shipp had the ball on the left side of Meila's 6-yard box. His cross deflected off the right calf of Graham Zusi and into the far side of the net.

It was the third straight game in which the Sounders benefitted from an own goal, and was third time this season they have won after conceding the first goal.

"Harry Shipp is a guy who is making his own luck - credit to him," Schmetzer said. "Harry was trying to put the ball in a dangerous spot. When you put pressure on opponents, good things happen."

Just four minutes later, Shipp sent another cross in from the left side. KC's Ike Opara went up for it, but the ball glanced off his right arm. A penalty kick was called, and Lodeiro drilled it into the back left corner.

Seattle played a man down from the 81st minute when defender Chad Marshall was shown a straight red card following a video review of his trip-up of Johnny Russell.

Prior to the game, the Sounders honored Clint Dempsey, who announced his retirement on Wednesday. He scored 57 goals across all competitions in six seasons with the Sounders. He scored another 57 in 141 appearances for the U.S. men's national team, and is the only American to have scored in three World Cups.

Dempsey was treated to a stadium videoscreen tribute from stars across the sports and entertainment world, and was presented with one of the Sounders' iconic golden scarves. He did not address the crowd or reporters after the ceremony.