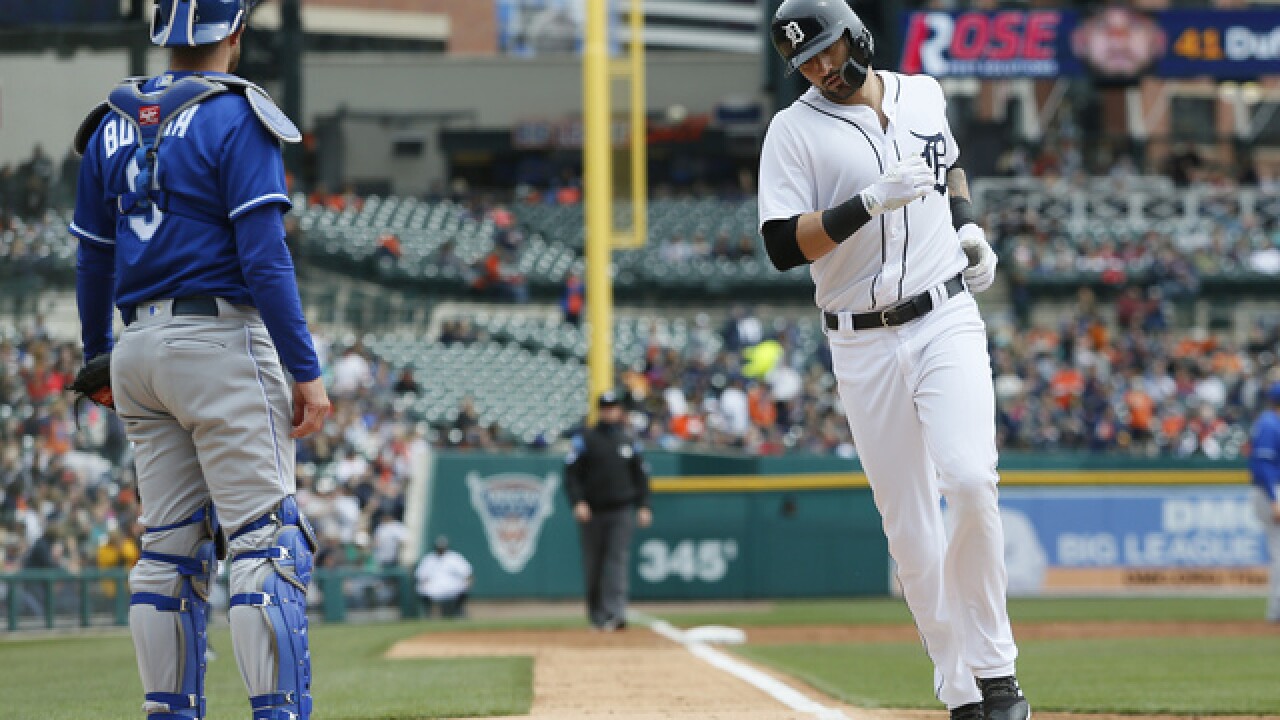 Copyright 2018 Scripps Media, Inc. All rights reserved. This material may not be published, broadcast, rewritten, or redistributed.
Duane Burleson
<p>DETROIT, MI - APRIL 21: Nicholas Castellanos #9 of the Detroit Tigers crosses the plate in front of catcher Drew Butera #9 of the Kansas City Royals after hitting a two-run home run during the third inning at Comerica Park on April 21, 2018 in Detroit, Michigan. (Photo by Duane Burleson/Getty Images)</p>

Nicholas Castellanos homered and drove in three runs, and the Detroit Tigers routed the Kansas City Royals 12-4 on Saturday.

The Tigers have won five of six. Detroit broke a 3-all tie with three runs in the fifth on a day when both starting pitchers were in almost constant trouble.

Warwick Saupold pitched 2 1/3 perfect innings for his first career save.

Abraham Almonte had three hits for Kansas City, which has lost 10 of 11. The Royals snapped a nine-game losing streak Friday night when they rallied in the ninth inning to salvage a split of a day-night doubleheader.

Castellanos finished a triple shy of the cycle. He opened the scoring with an RBI single in the first, and his two-run homer made it 3-1 in the third. The Tigers gave up two runs in the fourth, thanks in part to an error by catcher James McCann that loaded the bases with nobody out, but Detroit took the lead back for good in the fifth.

Dixon Machado hit an RBI single with two outs to make it 4-3, chasing Duffy. Reliever Tim Hill allowed a bunt single to Leonys Martin that loaded the bases, then the left-hander walked Jeimer Candelario and Miguel Cabrera to force in two more runs.

Jones hit a solo shot in the sixth to give the Tigers a 7-4 lead, and Cabrera's two-run single made it 9-4 in the seventh.

Royals: OF Alex Gordon (left hip tear) played in the first game of his rehab assignment Friday, going 0 for 4 with a run for Triple-A Omaha. Salvador Perez (left knee sprain) went 1 for 4 in that game as a DH, and he was expected to catch Saturday night for Omaha.