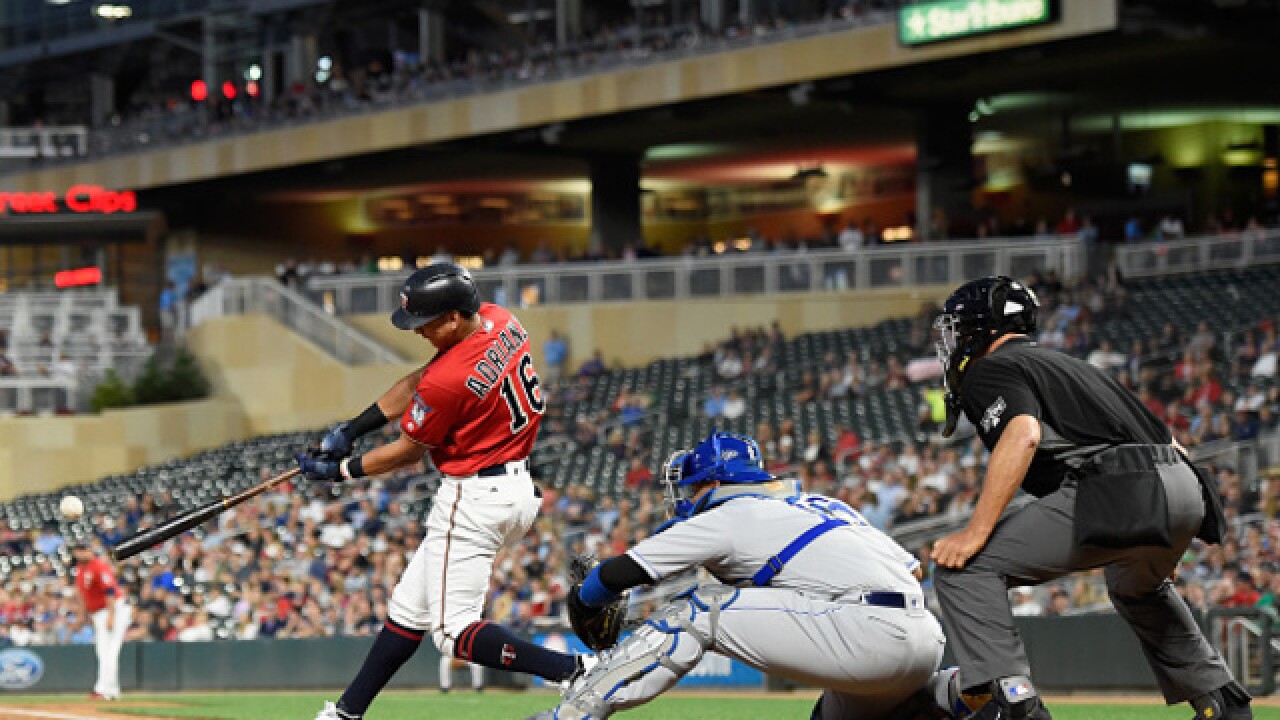 Copyright 2018 Scripps Media, Inc. All rights reserved. This material may not be published, broadcast, rewritten, or redistributed.
Hannah Foslien
<p>MINNEAPOLIS, MN - SEPTEMBER 07: Ehire Adrianza #16 of the Minnesota Twins hits a two-run single as Salvador Perez #13 of the Kansas City Royals catches and home plate umpire Kerwin Danley #44 looks on during the second inning of the game on September 7, 2018 at Target Field in Minneapolis, Minnesota. (Photo by Hannah Foslien/Getty Images)</p>

Trevor May  (4-1), one of six Minnesota relievers, picked up the win with two shutout innings.

Salvador Perez  homered and  Jorge Bonifacio  had three hits for the Royals, who have lost three straight after winning eight of nine.

Minnesota broke a 6-6 tie with a three-run fifth.  Max Kepler  and Adrianza had RBI singles against  Glenn Sparkman  (0-3). Rosario tacked on his team-leading 23rd home run leading off the eighth.

The Twins gave starter  Stephen Gonsalves  an early lead on Adrianza's two-run single in the second, but the Royals knocked him out with a six-run outburst in the third. Gonsalves, one of Minnesota's top pitching prospects, got through the first two innings without much trouble, but the second time through the order was a different story.

After No. 9 hitter  Cam Gallagher  flew out to start the third, the next five batters reached base against Gonsalves.  Alex Gordon 's two-run double tied the score at 2-2, and two batters later Bonifacio singled home Gordon to end Gonsalves' night.

Perez greeted reliever  Alan Busenitz  with a three-run homer into the bullpens in left-center. His 24th home run of the season gave the Royals a 6-2 lead.

The Twins sent Royals starter  Heath Fillmyer  to a similar fate in the bottom of the inning, knocking him out as five of the first six batters reached base.  Jake Cave  hit an RBI double and scored on a wild pitch to tie the game at 6.

Royals: OF  Brett Phillips  is day-to-day with a shoulder contusion he suffered running into the wall in Cleveland on Tuesday.

Twins: Rosario returned to the lineup after missing six games with sore quadriceps, but 3B  Miguel Sano  remained sidelined with a lower left leg bruise suffered on Tuesday in Houston.

Royals: In the second game of the series Saturday evening, RHP  Jorge Lopez  (1-4, 2.24 ERA) makes his fifth start for the Royals since being acquired from Milwaukee in the  Mike Moustakas  deal. His last time out he held the Orioles to one run over seven innings while striking out eight in a 9-1 victory.