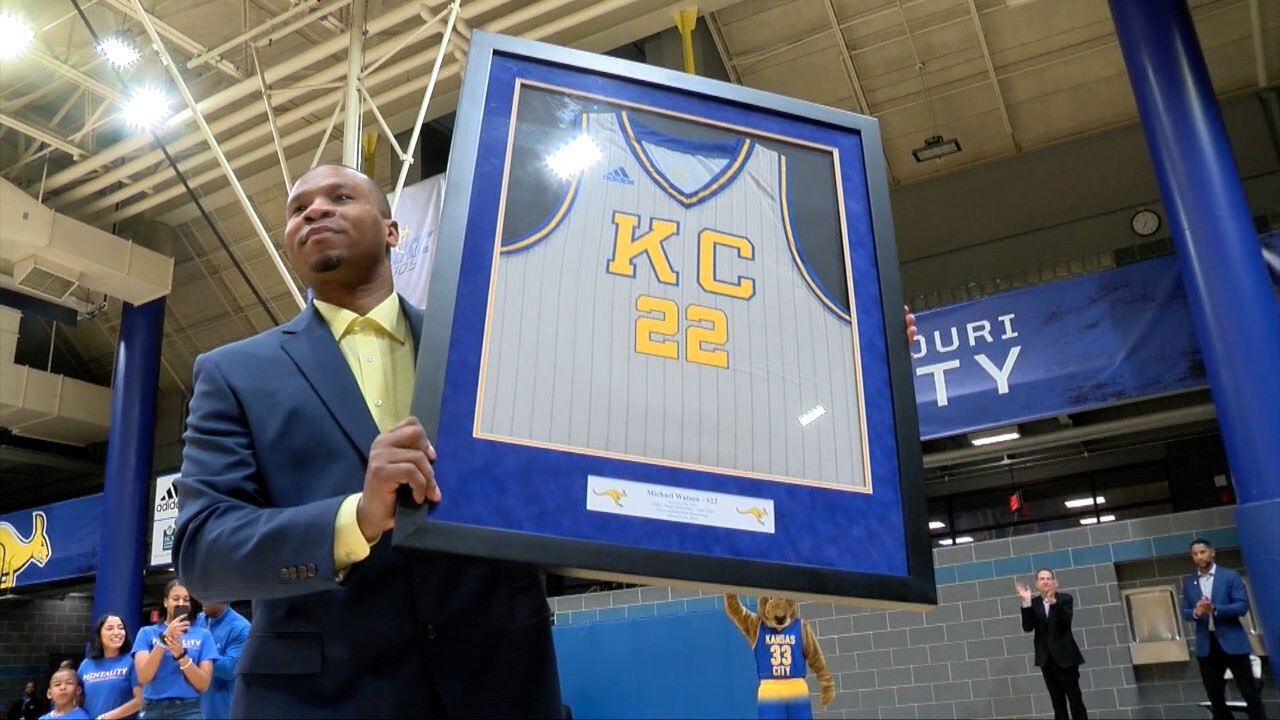 Copyright 2019 Scripps Media, Inc. All rights reserved. This material may not be published, broadcast, rewritten, or redistributed.
Former UMKC men&#39;s basketball player and current television analyst Michael Watson has his #22 jersey retired during halftime of the men&#39;s basketball game against Cal State Bakersfield. 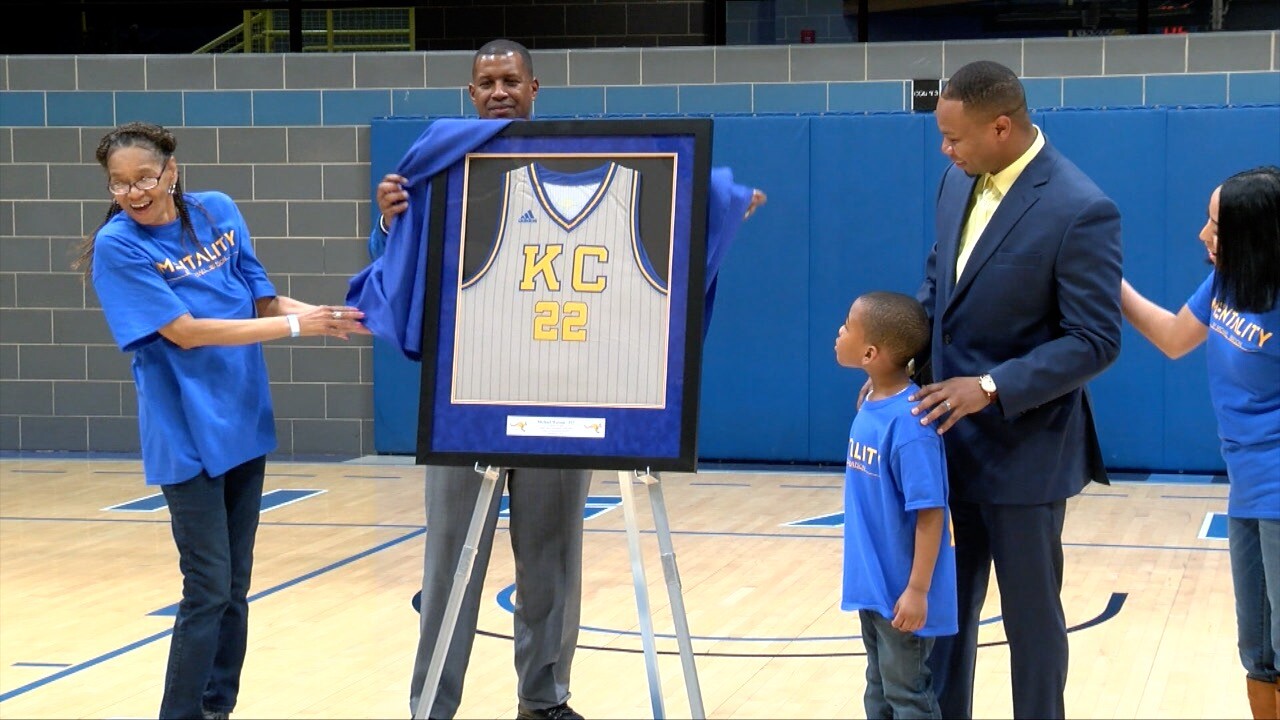 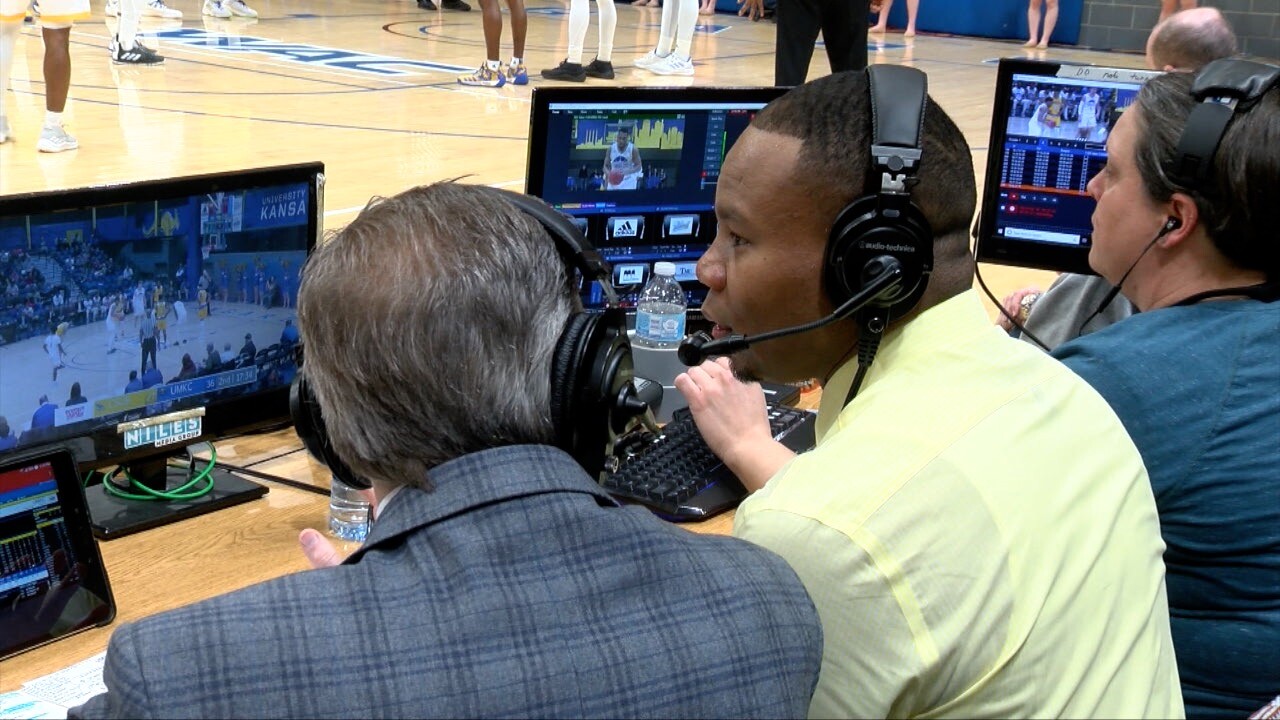 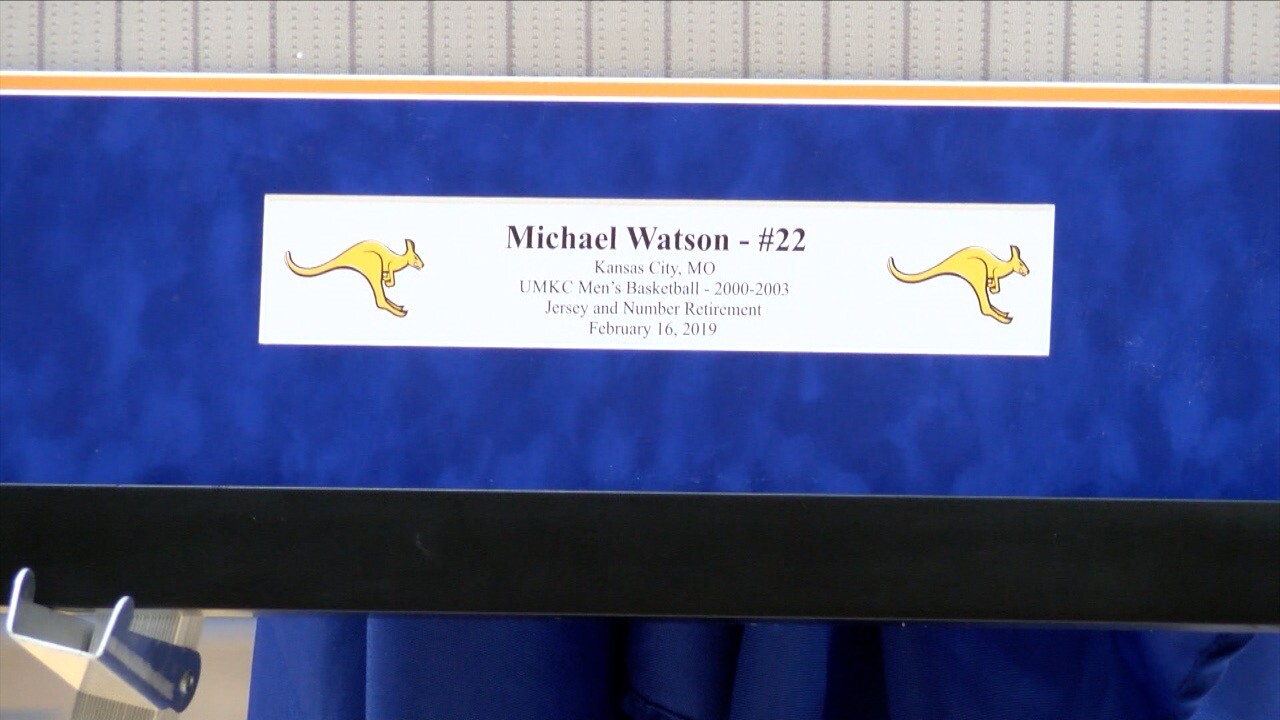 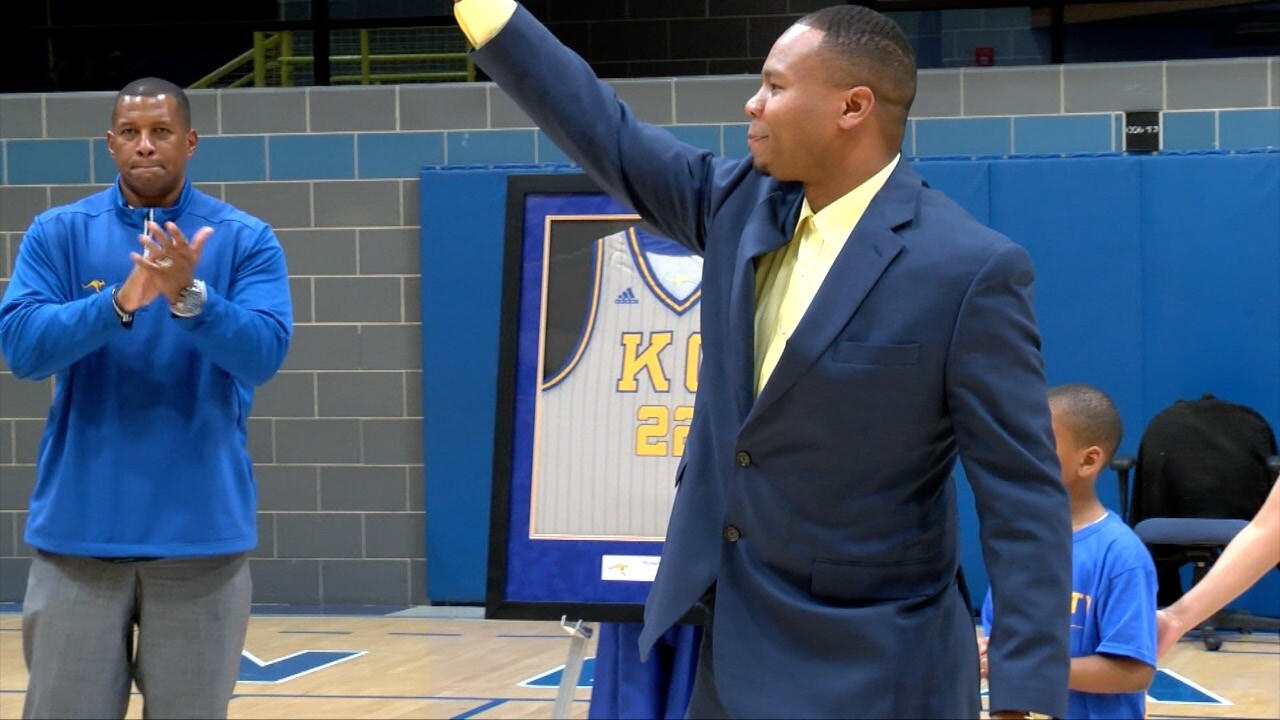 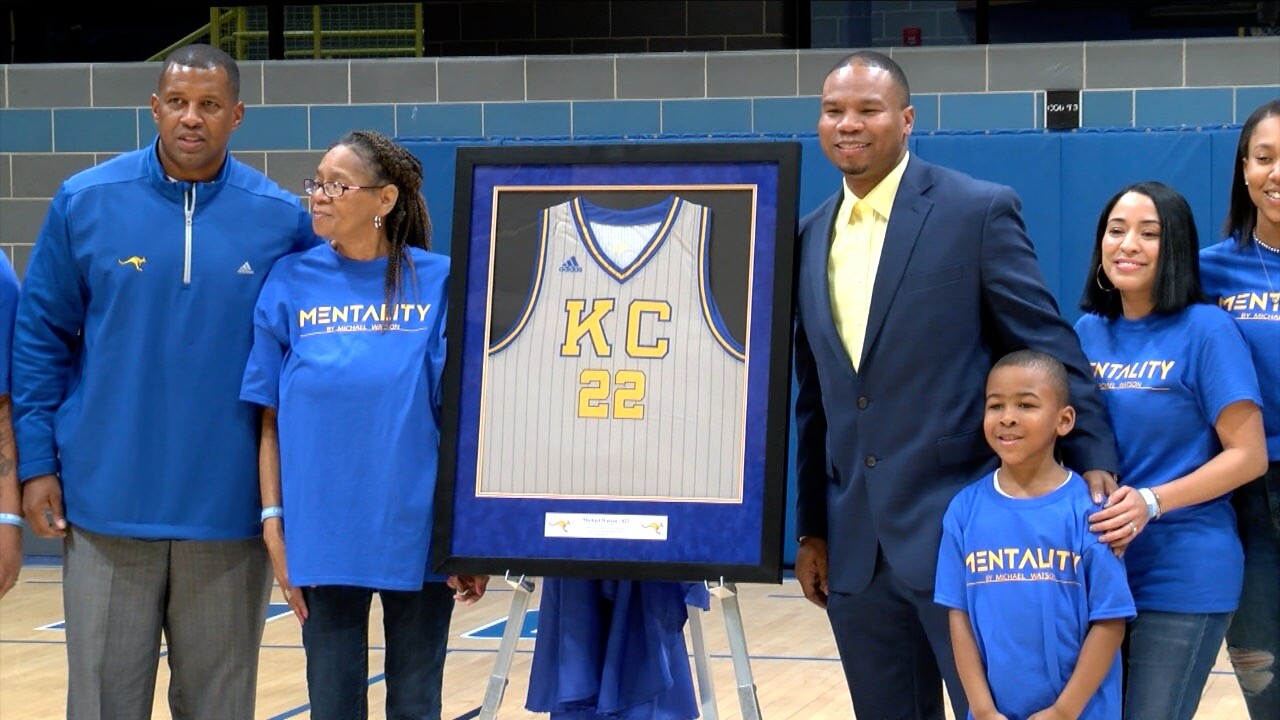 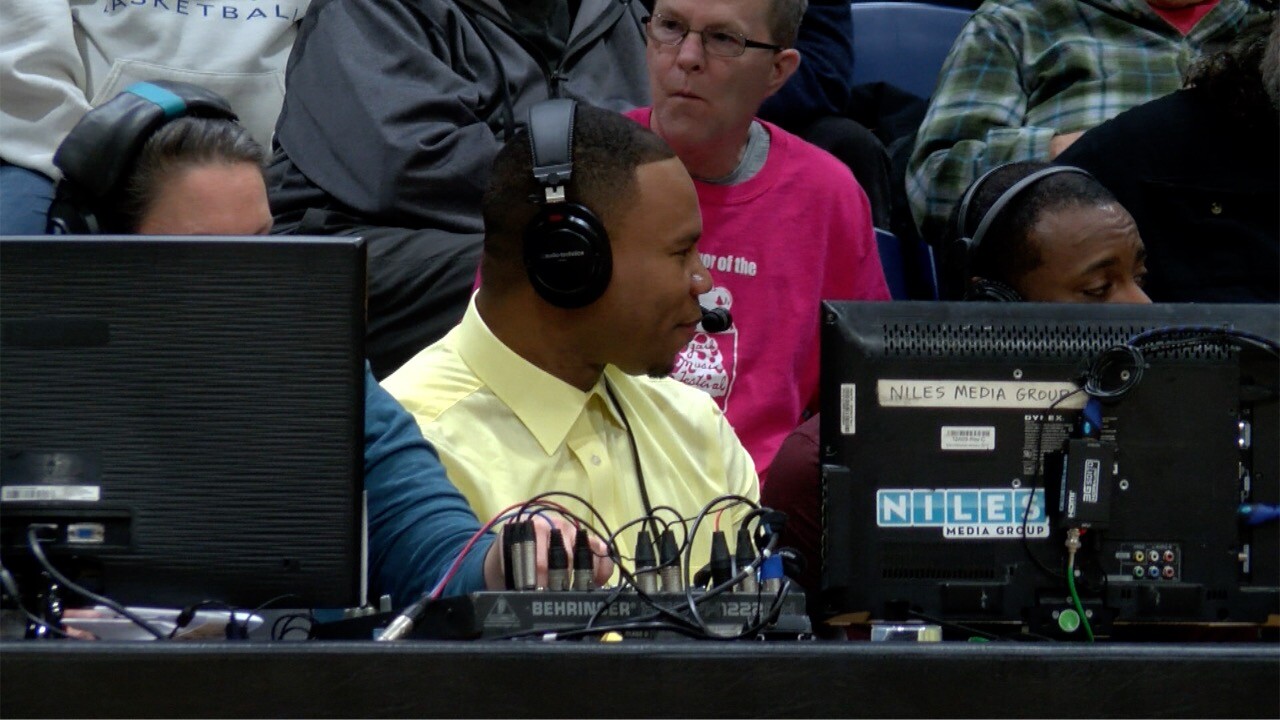 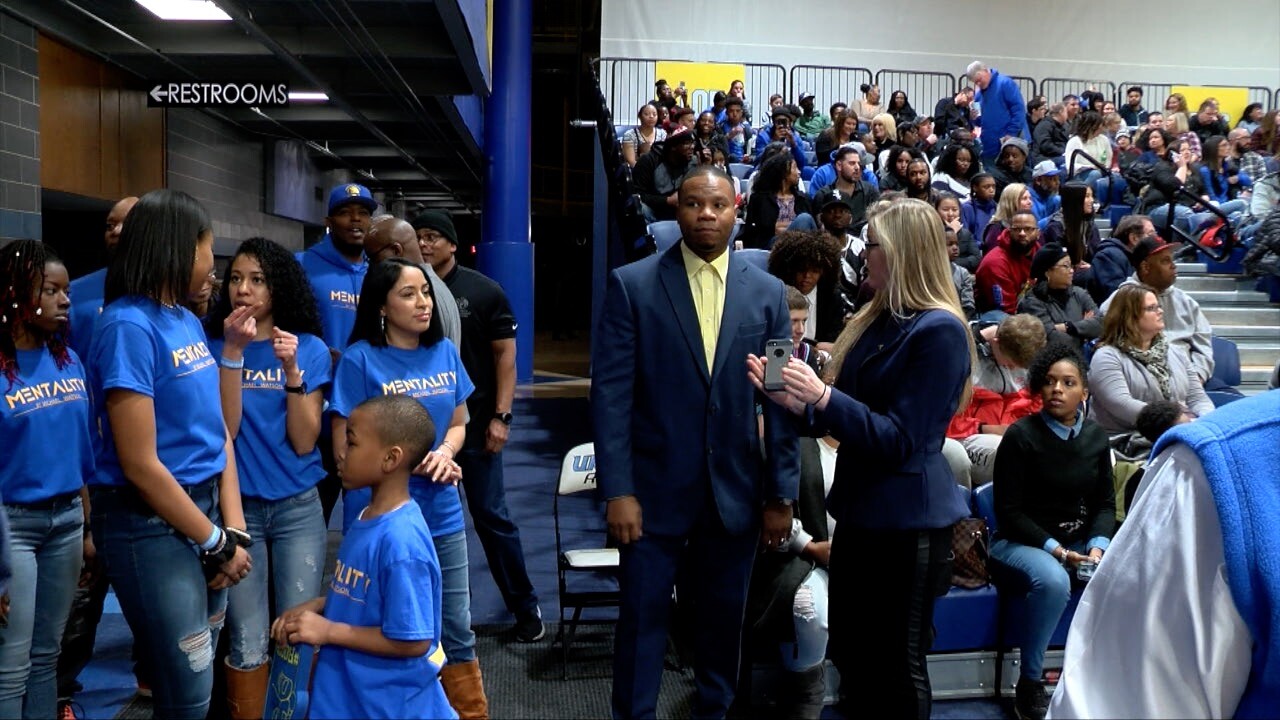 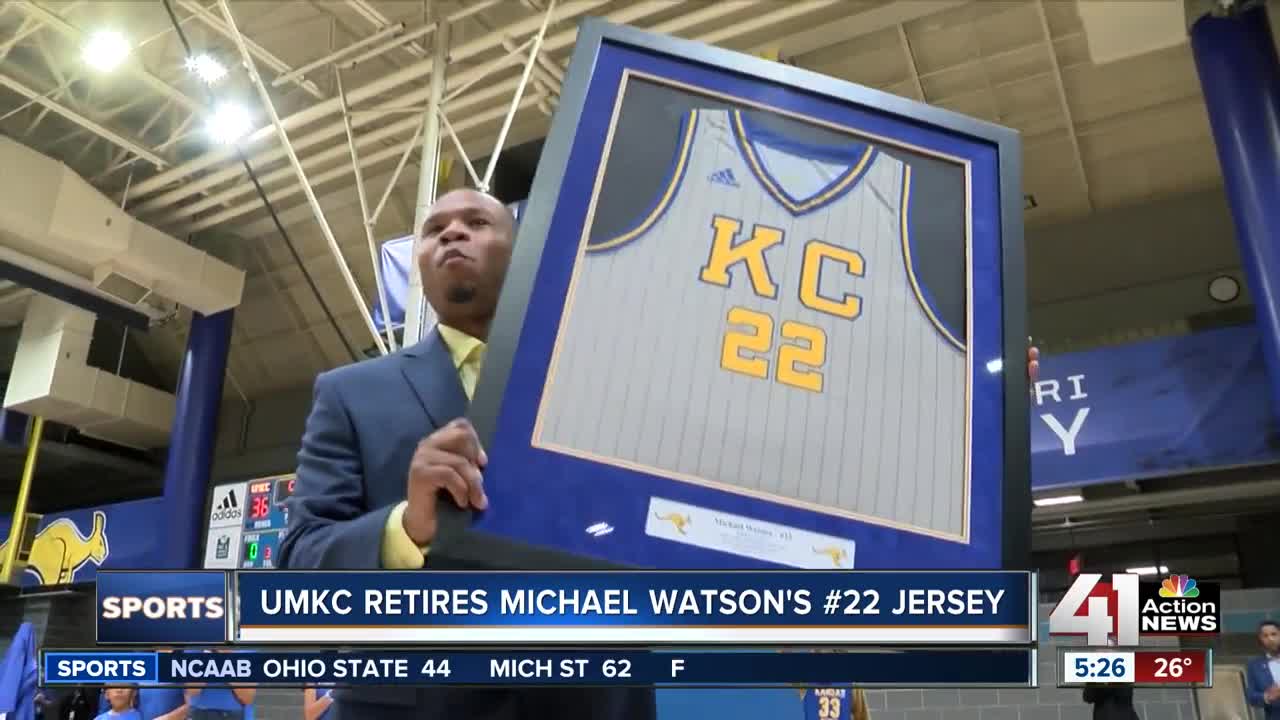 Watson became the third player in Kangaroos history to have their number retired Saturday, when the his No. 22 jersey was retired during an on-court ceremony at Swinney Rec Center.

Redshirt sophomore forward Brandon Suggs currently wears Watson's number and will continue to do so until the end of the season, but after that no player in the program will wear the number again.

A capacity crowd cheered for Michael, who now works television broadcasts for the Roos, during the halftime ceremony during a game against California State University-Bakersfield.

Watson's family, including his wife and five kids, were on hand to celebrate in the occasion.

"You think about (going) to college, you want to make it to the NBA and things, but you have to think about life after basketball," Watson said. "Just being honored in this way, for Dr. Brandon Martin and the staff and for those guys to do that for me, it just means a lot. It makes me think about all the blood, sweat and tears we put in here and in old Swinney."

Watson also was thrilled to see several former teammates — including Will Palmer, Tom Curtis, Quinton Day, and Carlton Aaron — who attended the game and ceremony.

"Jjust to see those guys ... brought back so many great memories," Watson said. "When Dr. Martin called me and told me they were gonna actually do this, I was really stunned, because a flood of memories came back, just the great times here. And I always tell people, 'I'm gonna be here (at UMKC) forever. I'll move back to Kansas City when I retire, and I wanna see UMKC do well.'"

Watson remains UMKC's all-time leading scorer with 2,488 career points. He also owns the single-game record after an epic 54-point outing against Oral Roberts in 2003. That performance included 10 three-pointers during a 91-86 double overtime win.

For a kid who grew up in Kansas City's urban core only a few blocks from the UMKC campus, it was an inspiring rise from humble beginnings to worldwide success.

"I was just wanted an opportunity to take care of my family," said Watson, who coaches his own AAU team. "That was it. When I was in seventh grade, I said I wanted to be a professional athlete, whether it be baseball, football or basketball. Basketball is kind of what just took off."

Current UMKC men's basketball coach Kareem Richardson knows the importance of having a person like Watson around the program.

"I tell you it's been awesome in our tenure since we've been here having Mike's support," Richardson said. "He's still a part of what we do. He's in the guys' ears and giving them real-life advice. The things that he's experienced — from playing professionally to what it really looks like to be a professional and how to get there now,] not wait till it's over, and preaching those things he's experienced — is awesome."

He's a shining example for the university, a proud alum and deserving of having his number retired.

"I genuinely appreciate what Mike has done for our team, our community, and (just) hearing his excitement on the TV games," Richardson said.