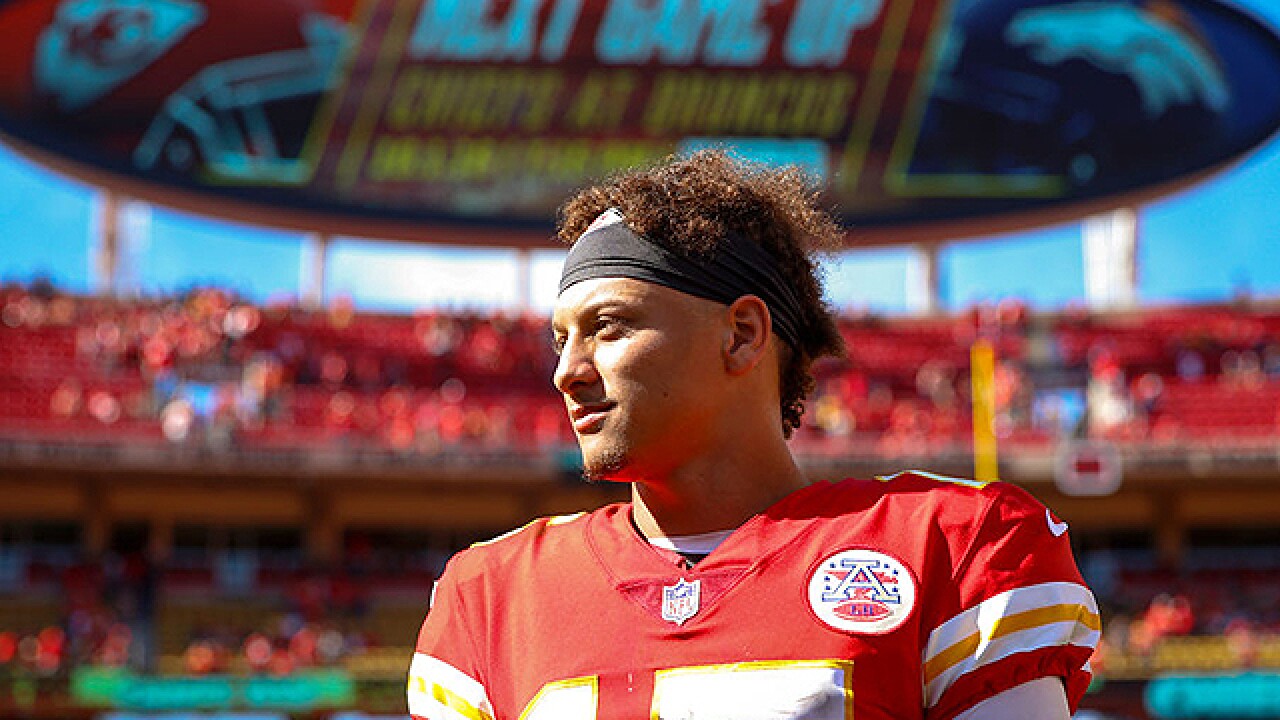 Copyright 2018 Scripps Media, Inc. All rights reserved. This material may not be published, broadcast, rewritten, or redistributed.
David Eulitt
<p>KANSAS CITY, MO - SEPTEMBER 23: Patrick Mahomes #15 of the Kansas City Chiefs looks on after a victory in the game against the San Francisco 49ers at Arrowhead Stadium on September 23rd, 2018 in Kansas City, Missouri. (Photo by David Eulitt/Getty Images)</p>

LOS ANGELES (AP) -- Sean McVay has looked up to Andy Reid for years. The Los Angeles Rams' young coach constantly studies video of his Kansas City counterpart's offensive sets during the season, marveling at their intricacies and ingenuity.

"Every single week they do something where you say, `That's pretty good,"' McVay said with an understated smile. "I'd be lying if I said we haven't stolen some of their stuff this year."

McVay gets a close-up look Monday night in one of the biggest games of the regular season and a possible Super Bowl preview.

The Chiefs (9-1) are visiting the Rams (9-1) in a game originally scheduled for Mexico City before poor field conditions at Azteca Stadium prompted the NFL to move the game to California on six days' notice.

Instead, the Coliseum will host a meeting of two prolific offenses masterminded by coaches separated by 28 years of age, but shoulder-to-shoulder on the cutting edge of football.

"He's done a phenomenal job," said Reid, a Los Angeles native who lives in Orange County in the offseason. "He came up through a good system. He's put his own flair to it. He's a smart kid. I am proud of him for the job he's done."

Two offenses averaging 33 points per game have never met this late in a regular season, and the game is only the fifth meeting since 1970 between two one-loss or unbeaten teams in Week 11 or later.

Offensive fireworks seem inevitable in a matchup tailor-made for prime time, even if the late venue switch caused logistical hurdles for ESPN . Both teams expressed disappointment about the game being moved out of Mexico City, even though McVay said it was "clearly the right thing to do" given the field conditions.

"We're certainly not going to complain about getting the chance to play at the Coliseum in front of a great atmosphere," McVay said.

More things to watch in the first "Monday Night Football" game at the Coliseum since 1985, and the Rams' first in the venerable arena since 1979:

The late change of venue ruined a big night for thousands of Mexican fans and thrilled Rams fans who will get an eighth home game to cheer, but it had little effect on either team's preparation. The Rams planned to spend the week in Colorado Springs to prepare for Mexico City's altitude, and they decided to stay anyway -- partly because several players and coaches wouldn't be able to return to their homes this week because of wildfires surrounding the towns near the Rams' training complex. The Chiefs merely altered their travel plans to take them west instead of south. "We really haven't had to change much, other than going to a hotel in Los Angeles," Reid said.

The Chiefs should have WR Sammy Watkins (foot) and LB Anthony Hitchens (ribs) on the field against the Rams. Neither played last week against Arizona, though Hitchens was active in what Reid called "an emergency situation." Undrafted rookie Ben Niemann got the start in Hitchens' place and performed reasonably well. Watkins is returning to the Coliseum, where he spent last season as the Rams' deep threat before getting a huge free-agent deal with the Chiefs.

Mahomes spent part of the week mourning the death of his longtime girlfriend's stepfather. The man had a medical emergency during their game against Arizona last Sunday, and Mahomes learned after leading Kansas City to a 26-14 victory that he had died. The Chiefs were off Tuesday and Wednesday, giving Mahomes time to spend with family, but he did not miss any practice time. "They've got some things organized and settled down from that side of it," Reid said, "so he can do what he's got to do."

But the Chiefs traded Peters to Los Angeles last offseason, and Reid has been reluctant to talk about why the organization gave up on the talented, occasionally volatile cornerback. Peters has generally played well in LA, although he acknowledged that he struggled two weeks ago when the Rams went up against the NFL's other dominant offense at New Orleans.

The Rams haven't had any evident problems with Peters off the field, either. "He's got a good feel for the game," McVay said. "He's passionate about it, and I think that I've been able to learn some things from him and enjoy being around him."

The Chiefs allowed five sacks last week against Arizona, the first time all season that their hodgepodge offensive line has struggled that much. That's not a good sign when the next opponent has NFL sacks leader Aaron Donald and Ndamukong Suh on the defensive line.

The Chiefs have been playing without C Mitch Morse (concussion) and RG Laurent Duvernay-Tardif (broken leg), forcing them to shuffle things around. "You know," Reid said, "I thought it could be a positive for us. That group hasn't played a bunch together, and so (the Cardinals) did a couple of things in there that will help us down the road here and we can learn from."