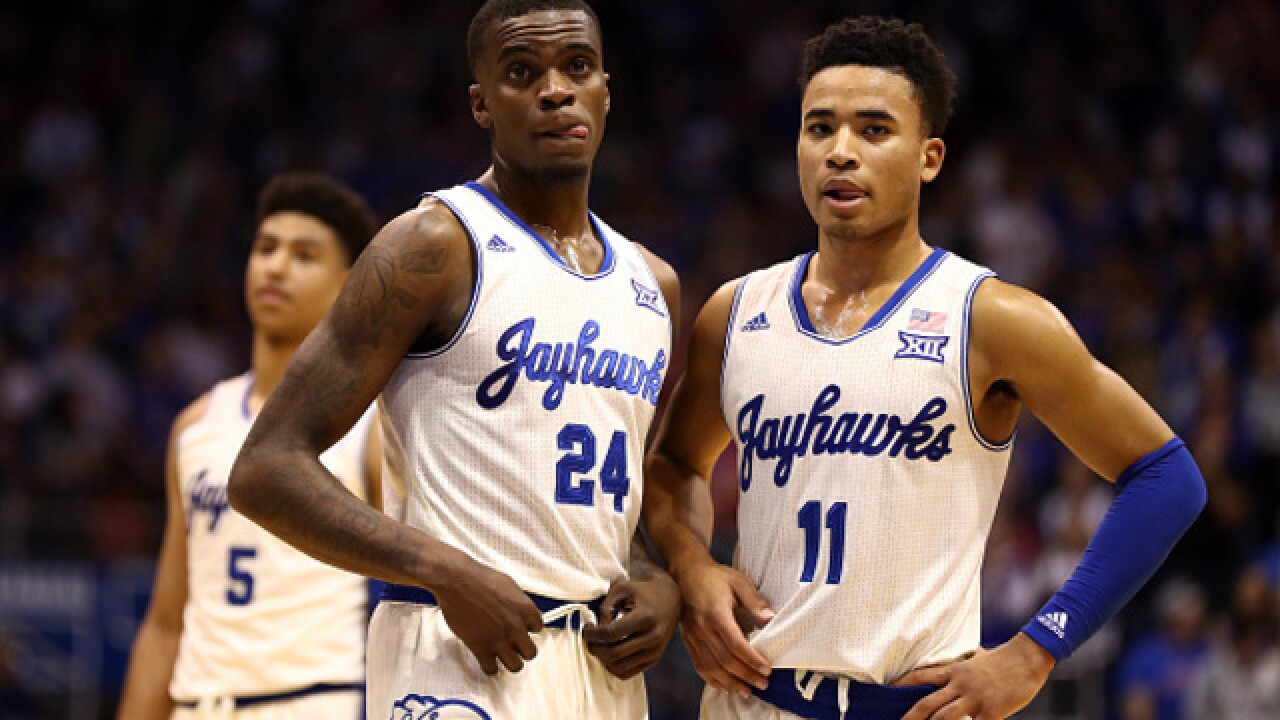 Copyright 2018 Scripps Media, Inc. All rights reserved. This material may not be published, broadcast, rewritten, or redistributed.
Jamie Squire
<p>LAWRENCE, KANSAS - NOVEMBER 16: Lagerald Vick #24 and Devon Dotson #11 of the Kansas Jayhawks wait during a timeout in the game against the Louisiana Lafayette Ragin Cajuns at Allen Fieldhouse on November 16, 2018 in Lawrence, Kansas. (Photo by Jamie Squire/Getty Images)</p> 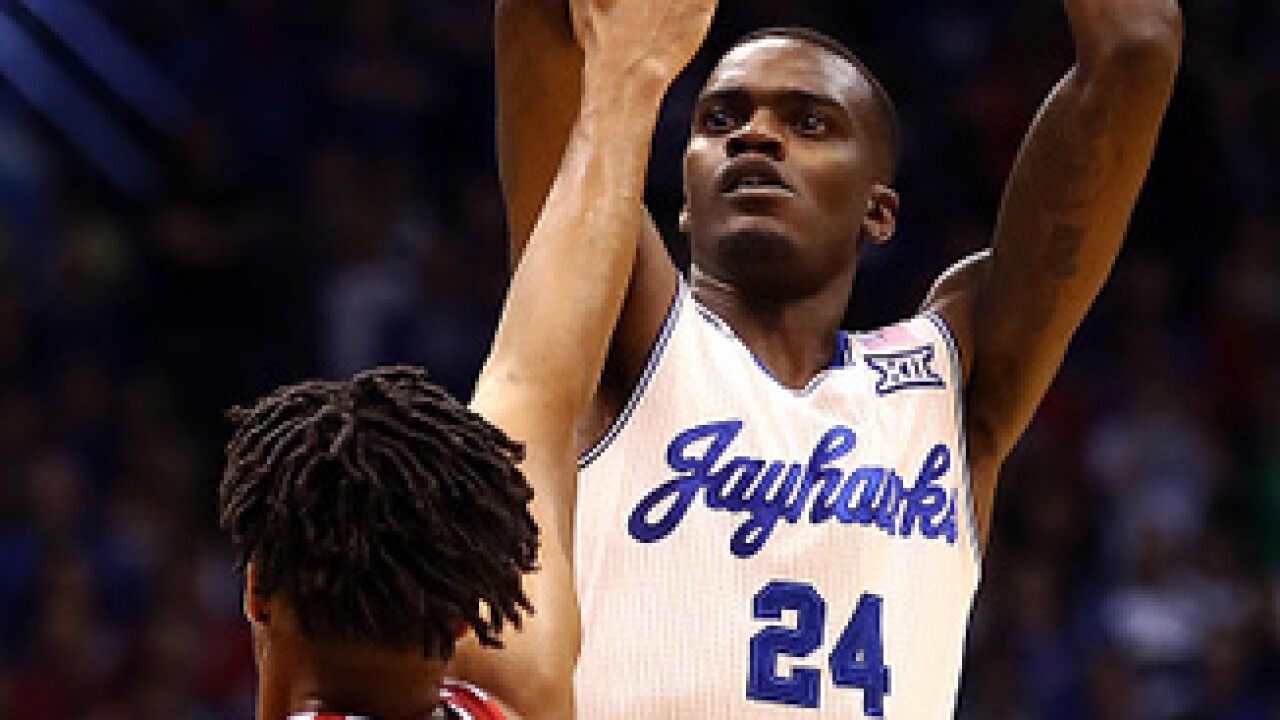 LAWRENCE, Kan. (AP) — Lagerald Vick had declared for the NBA draft and Kansas had moved on without him, recruiting a trio of backcourt players to take his place and planning for the upcoming season.

Then Vick changed his mind and returned for his senior year.

Good thing for the Jayhawks.

Vick hit seven 3-pointers and had a career-high 33 points Friday night, following up his 32-point outburst against Vermont earlier in the week, and second-ranked Kansas needed just about every bit of his hot shooting to finally turn away Louisiana-Lafayette in an 89-76 victory.

Vick also had nine rebounds for the Jayhawks (3-0), while big men Dedric Lawson and Udoka Azubuike came alive down the stretch. Lawson had 19 points in a strong bounce-back from his scoreless dud against the Catamounts, and Azubuike finished with 17 points, eight boards and four blocks.

“We’re just going to keep feeding the hot hand until it runs out,” said Lawson, who made a shot from his backside early in the game. ”(Vick) and Udoka, they’ve both been playing well.”

Justin Miller scored all 22 of his points in the first half to lead four players in double figures for Louisiana-Lafayette (1-2), which has only beaten one top-five team in school history. JaKeenan Gant added 18 points, Malik Marquetti scored 14 and Cedric Russell finished with 10.

“They said it happened five times — I’m not sure if it was five but it felt like 10 — where we had transition numbers and missed it and they shot a 3 at the other end and made it,” Kansas coach Bill Self said. “If it happened five times, that’s a 25-point difference in a span of 10 seconds of what it might have been. We have to eliminate that.”

Indeed, Miller and the Ragin’ Cajuns had the Jayhawks on the ropes most of the way.

Taking advantage of Kansas’ slow start, Louisiana-Lafayette ripped off an early 15-2 run that was capped by a five-point trip down the floor. Gant knocked down a 3-pointer, Self lit into an official to earn a technical foul, and Marcus Stroman hit both the free throws to give the reigning regular-season Sun Belt champs a 32-20 lead with about 10 minutes left in the first half.

The Jayhawks finally woke up with a 10-0 run of their own. Then, after Miller hit his fourth 3 of the half, Kansas went on another brief run to take a 44-41 lead into the break.

It was a two-man show at that point: Miller had scored all his points while Vick had 18.

Miller cooled down in the second half but the Ragin’ Cajuns refused to go away, even when foul trouble set in. The Jayhawks were clinging to a 65-64 lead with 8:40 to go when they started to pound the ball inside, taking advantage of their size for the first time all game.

Lawson and Azubuike combined to score 16 straight before Vick, who was 8 for 8 from beyond the arc against the Catamounts, poured in his final 3-pointer to give himself a new career high.

“Just having a whole lot of energy,” Vick said. “My teammates are finding me for open shots and really just going out there and having fun. Just leaving it all out there.”

Kansas City Chiefs linebackers Anthony Hitchens, Reggie Ragland and Ben Niemann were in the crowd ahead of their showdown with the Rams on Monday night in Los Angeles. Sporting Kansas City captain Matt Besler also was in attendance before heading to Portland for the MLS Western Conference finals Sunday.

There was a buzz all afternoon that Kansas was close to hiring Les Miles to replace fired football coach David Beaty, but no announcement came and the former Oklahoma State and LSU coach was not at Allen Fieldhouse. The Jayhawks visit Oklahoma in their penultimate game of the season Saturday.

Louisiana-Lafayette: After back-to-back games against top-10 teams, the Ragin’ Cajuns should be favored in most of their games the rest of the way. The Cayman Islands Classic is up next.

Kansas: There was plenty of laboring in back-to-back home wins over mid-majors. Perhaps a trip to New York for the NIT Season Tip-Off will help the Jayhawks find the intensity they had when they nearly led wire-to-wire in beating Michigan State to open the season.

Kansas plays No. 24 Marquette on Wednesday night in New York.