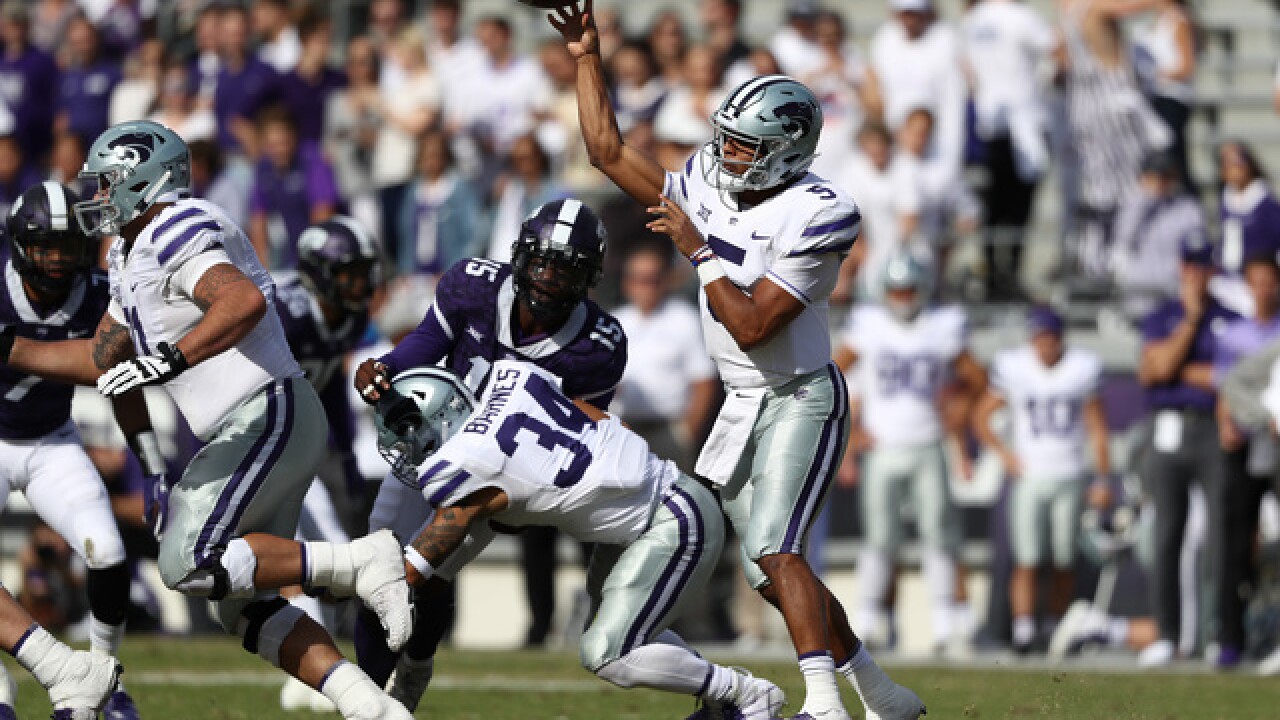 Copyright 2018 Scripps Media, Inc. All rights reserved. This material may not be published, broadcast, rewritten, or redistributed.
Ronald Martinez
<p>FORT WORTH, TEXAS - NOVEMBER 03: Alex Delton #5 of the Kansas State Wildcats throws against the TCU Horned Frogs in the first half at Amon G. Carter Stadium on November 03, 2018 in Fort Worth, Texas. (Photo by Ronald Martinez/Getty Images)</p>

Mike Collins threw a 67-yard touchdown pass to Jalen Reagor in the third quarter and TCU held on for a 14-13 win over Kansas State on Saturday after the Wildcats missed a potential game-tying extra point in the fourth.

The Horned Frogs (4-5, 2-4 Big 12) avoided the first four-game losing streak in 18 seasons under coach Gary Patterson, and improved their chances of becoming bowl eligible for the 16th time in that stretch.
The missed PAT, a muffed punt and a botched field goal attempt put Kansas State (3-6, 1-5) in the position of having to win its three remaining games to qualify for a bowl.

The Wildcats lost quarterback Skylar Thompson to an injury in the first quarter, but backup Alex Delton answered each TCU touchdown.

Reagor fought off cornerback AJ Parker on the deep throw from Collins, turned and ran into the end zone to break a 7-7 tie midway through the third quarter. Jonathan Song kicked what turned out to be an important extra point.

Delton found Taye Barber for 27-yard touchdown on his first series late in the first quarter, and scored on a 1-yard plunge early in the fourth before Blake Lynch hooked the PAT attempt to the left with 9:16 remaining.

Jarrison Stewart's 31-yard catch set up a 4-yard run by Darius Anderson for a 7-0 TCU lead after Isaiah Zuber muffed a punt and Jawuan Johnson recovered at the Kansas State 43-yard line.

Delton, who hadn't played in four games, kept Kansas State's first scoring drive alive by drawing the Frogs offsides on fourth-and-1. Seven plays later, Delton threw a 21-yard score to an outstretched Malik Knowles in the back of the end zone.

Reagor finished with three catches for 92 yards. Collins completed 17 of 33 for 218 yards.

Kansas State: The Wildcats dominated the second quarter, but missed a chance for a 26-yard field goal when holder Colby Moore couldn't handle the snap and threw a pass into the end zone that TCU's Markell Simmons intercepted.

TCU: At No. 12 West Virginia next Saturday.