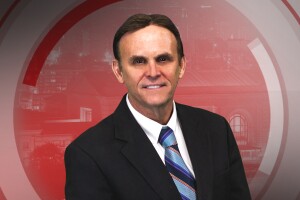 I love connecting with you on social media, and you can find me lots of places:

Anderson Alcock can be reached at Anderson.alcock@kshb.com.

When did you start working here?
I started working at 41 Action News as an investigative reporter August 31, 2015.

Where else have you worked?
I came from the CBS affiliate in Tallahassee, Florida WCTV where I was an anchor and reporter.
Some of the places I’ve worked in television include Louisville, Chicago, Nashville and the island of Guam.

Where did you go to college?
My undergraduate degree in politics and history is from Wake Forest University in Winston-Salem, NC.
I have a master’s degree in journalism from Indiana University in Bloomington, IN.

What are you most proud of when it comes to your work?
I’m a four time Emmy Award winner and have also won Florida and Kentucky Associated Press Awards as well as Micronesia and Louisville Chapter Society of Professional Journalists Awards. While I’m proud of being recognized by my peers for good work, I’m most proud of giving a voice to people who’ve been exploited and exposing wrongdoing among powerful people.

What are you most proud of in your own life?
My wife Sarah and son Gordon are the pride and joy of my life.

What do you love about living in the KC area?
Kansas City felt like home immediately because one of my two brothers lives here with his family.

What are your favorite local hangouts/places, sports & cultural institutions?
Woodside Health and Tennis Club is a place you can find me frequently when I’m not at work.

All-time favorites... (movies, shows, books, music)
One of my all-time favorite books and movies is “All The President’s Men” which partially inspired my choice of profession. I have an eclectic taste in music. I’m excited to explore Kansas City’s jazz and blues scene. I also like rock and classical music.

Apps you can't live without :
My favorite apps are Facebook, Twitter, Facetime, Spotify, WatchESPN and MapMyRide to keep track of my bicycle riding.

Anything else folks should know?
I’m originally from the Chicago area and am a lifelong Cubs, Bears, Blackhawks and Bulls fan. I also obsessively follow Wake Forest sports, especially basketball and football. Go Deacs ! My American League team is now the Royals and my AFC team is now the Chiefs! My wife and son are big soccer fans so we’ll be following Sporting KC as well!