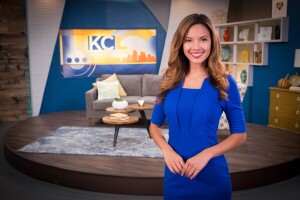 Crystle Lampitt is the on-air Host of KMCI-TV (38 The Spot), and the Digital Reporter for KSHB-TV’s 4 p.m. newscast, The Now (41 Action News). She also contributes to KSHB-TV’s Kansas City Live as a fill-in co-host and reporter. Crystle covers local news, trending topics (local and international), and Sporting Kansas City games. Whether it’s a player profile, viral video or breaking news, Crystle is on it!

Born in Cairo, Egypt to an American father and an Indonesian mother, Crystle spent most of her childhood in Indonesia, and came to Kansas City in 2000 when her family relocated. She has worked in various areas of the entertainment industry over the years, appearing internationally in ad campaigns, TV commercials, runway, and print jobs.

Crystle began modeling at the age of 14 doing fashion shows for local designers and charity events until she gradually built up an international modeling career. Her American/Indonesian ethnicity opened doors for her to work in Asia as a model, which she pursued full time after finishing school. She studied Film/Media and Communication at the University of Kansas where she graduated with honors in 2009. Her passion for travel, art, and culture led her to work in countries like Hong Kong, Singapore, the Philippines, South Africa, and Australia.

In addition to her modeling career, Crystle also found herself in a rewarding position as a preschool teacher at a private school in Sydney, Australia.

Upon her return to Kansas City in 2012, Crystle continues to model while working in TV as a host and reporter. She also has partnerships with The Humane Society of Greater Kansas City and Big Brothers Big Sisters to help improve the community. In her spare time, Crystle enjoys spending time with family and friends, eating Indonesian food, and playing the piano.

Send Crystle any story ideas by contacting her on Twitter @Crystlelampitt or via email: crystle.lampitt@kshb.com .