REVIEW: "The Last Jedi" is the best Star Wars movie ever 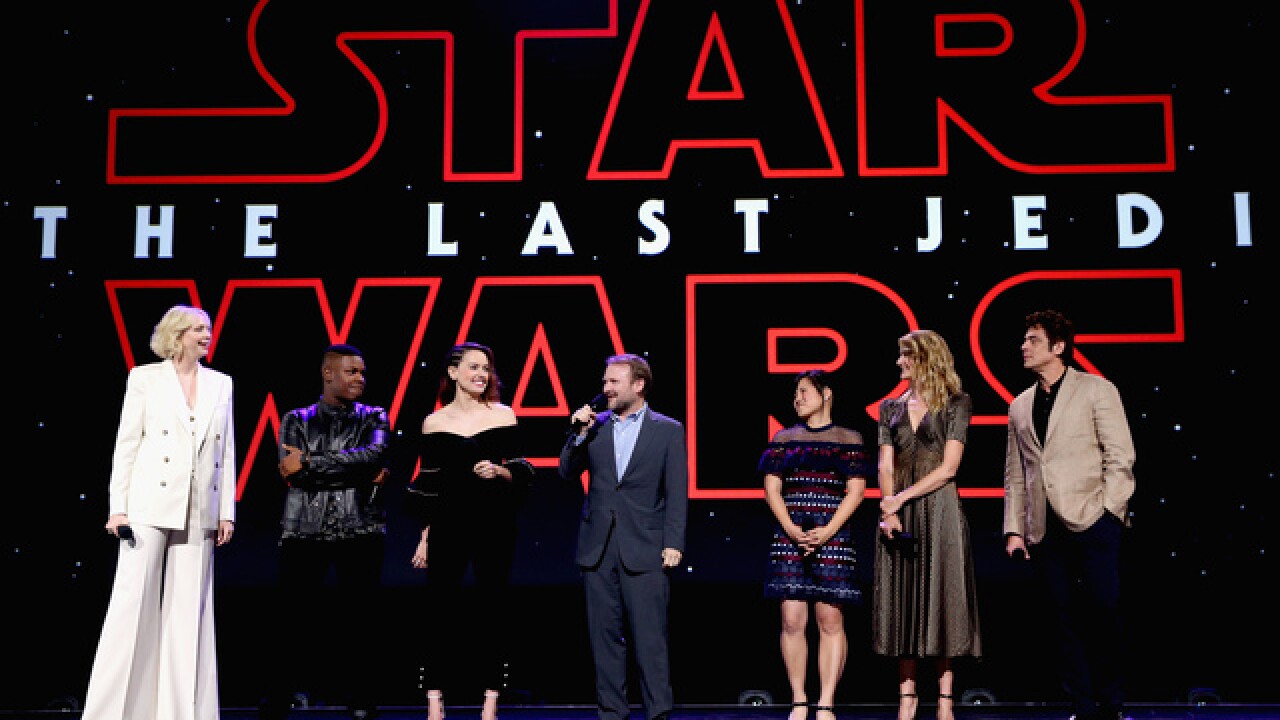 Chris Allen and Sarah Kallail are two of the three co-hosts of our movie podcast, Screened on the Spot. Monday night they attended an advance screening of Star Wars: The Last Jedi. Here's what they thought, starting with Chris:

The Last Jedi is the best Star Wars movie ever made. Yes, better than The Empire Strikes Back. I can’t believe I’m actually saying those words, but it’s the truth.

Look, I love The Empire Strikes Back. It's widely considered one of the greatest movies of all-time. So I understand people may start throwing lightsabers at my head for saying this new installment is better. But, I think this movie may surprise you. If you don't agree it's the best of them all, you will at least say it's a close second. Trust me, I battled with this thought all night. But I have finally come to the conclusion that The Last Jedi is the best Star Wars movie in the galaxy.

Director Rian Johnson has created a powerful piece of cinema that will rock you to your core. You won't stop thinking about it. The Last Jedi is packed with surprises. “This is not going to go the way you think”, Luke Skywalker explains in the film. And he’s right. You will be forced to question what’s right vs. what’s wrong, and who’s good vs. who’s evil. This will last throughout the course of 150 minutes. It's also full of strong female leads, adding a much-needed balance to the force. The characters are well-developed. The acting is superb. The atmosphere is jaw-dropping.

The Last Jedi truly has everything you are looking for. The die hard fans will love it, and the first-timers will fall in love with it. It’s a movie everyone can enjoy. Go see The Last Jedi. It will blow you away! I promise you, the force is strong with this one.

Here's what Sarah thought of Star Wars: The Last Jedi:

The credits rolled and I wiped away a few tears. I always cry in Star Wars movies. Usually, it's at the very beginning when the green, glowing LucasFilm logo pops up on screen and I can't contain my excitement because I'm watching another Star Wars movie. These films are emotional for many people. For some, it's the feeling of their childhoods coming rushing back. For others, it's the attachment of loved and revered characters. Star Wars feels like home.

After my sniffling came to a controllable point, I started to process what I had seen. I still haven't fully been able to do so, mostly because I haven't been able to talk at length with others who watched it. But one thing is for sure... I can't stop thinking about The Last Jedi.

Rian Johnson's first foray into the franchise is a success. More than that, it's a crazy ride full of surprises and plot twists you would never expect. I found myself many times saying to myself "wait, what?" Yes everyone, Rian Johnson just did that.

Adam Driver, Daisy Ridley, and Mark Hamill are the stars of this show. Someone asked me "do they give Luke Skywalker anything to do in this movie?" The answer is yes. Hamill has said in interviews he "fundamentally disagreed with everything (writer/director) Rian wrote for his character" in this film. I can see why. This is Luke Skywalker as you've never seen before. Gone are the days of that innocent, whiny kid on Tatooine. Gone is the Jedi Master full of confidence. Luke Skywalker is broken. Hamill's scenes stuck with me and are by far what will tug at your heartstrings the most.

You can't ignore Driver as Kylo Ren and Ridley as self-admitted "nobody from nowhere," Rey. This movie takes us way beyond what The Force Awakens gave to us, which is a bad guy to hate and a good guy (girl) to root for. The Last Jedi puts them both in a boiling pot, shakes it up, and you won't know what's what, until you do.  What do we learn from this film? There is good, bad, but also a gray area in the galaxy. The major themes of all the Star Wars movies shine through in all three of their performances. In them, you see the fight between dark and light, the struggle to find balance, conflict, rage, and most of all, hope.

Besides the "big three", we spend a lot of time with John Boyega as Finn, and newcomer Kelly Marie Tran as Rose. I'm excited to see where the next film takes these two. They could easily be a spin-off TV show called Rose and Finn's Big Adventure. They compliment each other and bring a lot of heart to this movie.

As a female fan, this new batch of Star Wars films is a win. Princess Leia was, and always will be, a little girl's dream. I love a Princess who doesn't wait around for someone to save her but takes her destiny into her own hands. But now we're seeing a heroine take over. First, it was, Leia. Then it was Rey. Rogue One introduced us to Jyn Erso. Now a new favorite of mine from The Last Jedi emerged. That is Laura Dern's character, Amilyn Holdo. She's tough to love, but women in Hollywood have been demanding more strong female characters, and Rian Johnson totally delivered. It's quite enjoyable watching her put Poe Dameron in his place throughout the film.

"But what about the Porgs?" You ask?  The Porgs are very cute and didn't Jar Jar up the movie. I am pro-Porg.

For those who doubted Rian Johnson, I say to you, have no fear. I always knew he was a talented writer and director and am glad he was able to prove it in a big budget way. Our beloved story is in good hands with him. Star Wars: The Last Jedi is fantastic. I can't wait to see it again.

The opinions presented here are those of our reviewers only.